Apparently bathtubs were the hot home-decor item at Michael's this spring. Of course, the doll collector can't help but wonder if any of the tubs will work with her dolls. I ended up buying three. 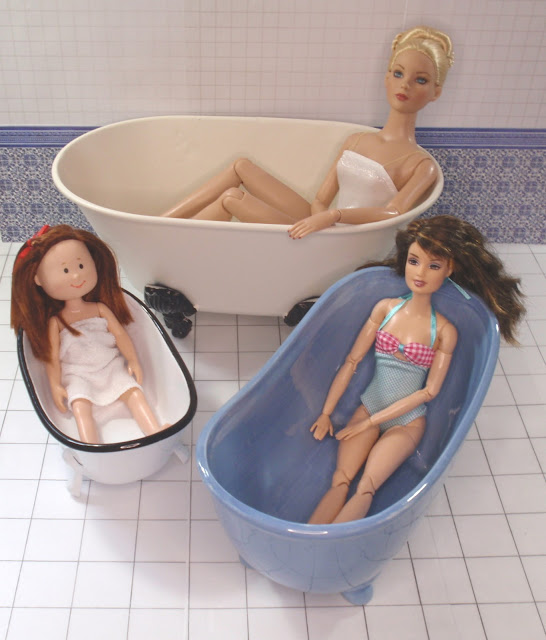 The white tub with the black feet is just about right for 16" dolls. Sam's legs can't extend all the way out inside the tub, but she found it a nice place to soak and day dream. 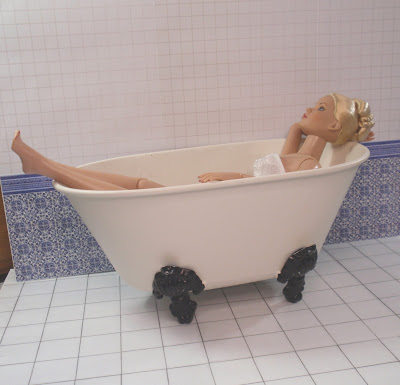 There were two other sizes of this tub at Michael's. At least, I think that one next to the biggest tub, is smaller than the medium tub. I forget now, and it's hard to tell! 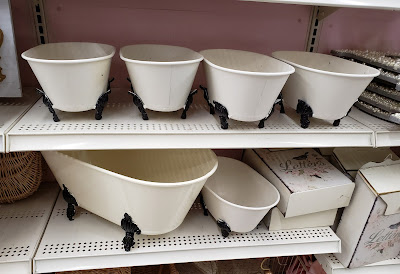 Teresa liked playing with a rubber ducky. This tub is just a bit on the big size for a 12" doll, maybe, but I think it looks fine when pictured from the side. 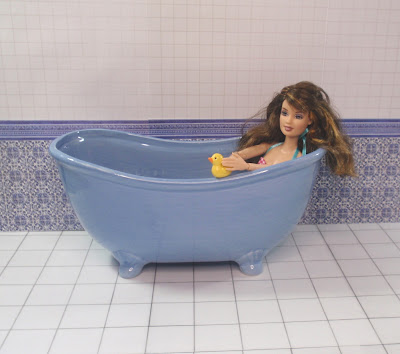 There were three colors of that bathtub at Michael's: the one above and the two below. 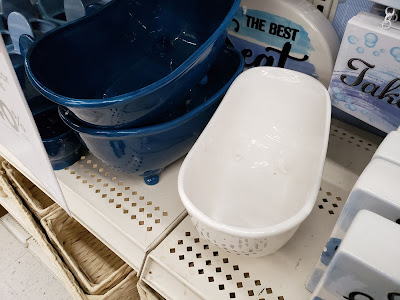 Marie thinks this bathtub just the right size for her and her school friends. The Eden line of Madeline dolls included a set of bathroom furniture long ago, but as with just about everything from this line, it's super expensive on the secondary market now. The soap/dish and bath brush came from a Madeline set, and I also have a Madeline freestanding towel rack which came with the towel that Marie is using. 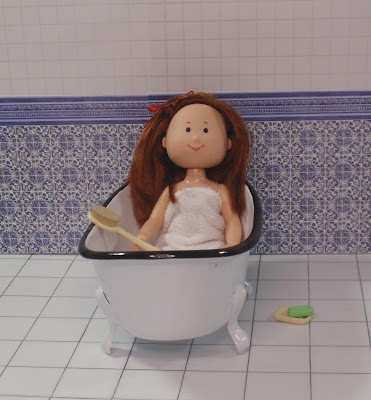 I happened to go down a different aisle at Michael's and saw that there were also bathtubs like this one in red and green, in the "strawberry theme" section of home decor. 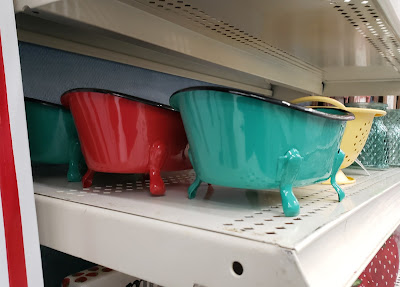 I tried the trick of putting clear Contact paper on the floor tiles, which is supposed to make the paper look more like shiny vinyl tile. Maybe it's just my lighting, or angles, or something, but I don't see a big difference.

Also at Micheal's was a bathtub/candle holder, in two different colors. 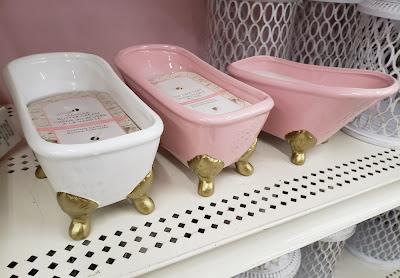 Someone else on Instagram bought it for dolls. I was debating getting one, but I didn't want to bother digging out the candle. These tubs were pretty small, too.

Also, there was this galvanized tub with a shower head. This would be about right for American Girl or a large doll like that. 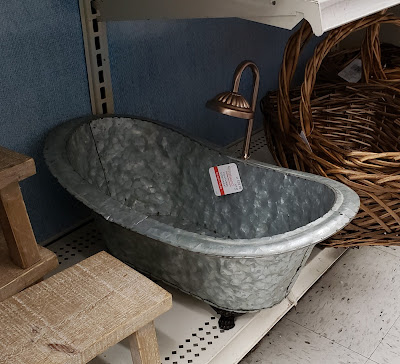 Don't mind the prices on Michael's things. The newest stuff goes on sale practically from the minute it comes in the door. This conveniently means you can't use their coupons for the newest stuff, as most Michael's coupons are not usable with sales items. Occasionally you do get a coupon which gives you a percentage off of your entire purchase including sales. On the other hand, last month I walked out with a plastic scrapbook paper storage case, two rolls of materials for my Cricut, and a several foot long garland made up of foam-type pastel Easter eggs for less than $8. I felt like I was stealing something. The trick at Michael's is to keep your eye on sales and to be signed up in their membership program, which gets you coupons.

Also at Michael's of doll interest was this piece of artificial green grass. It was labeled as a placemat, but can you imagine crumbs and spills on this? Maybe it would be nice for a centerpiece, with an Easter tree on top. It's smaller than the other piece of fake grass that I have; I used this one for my Easter shoot. 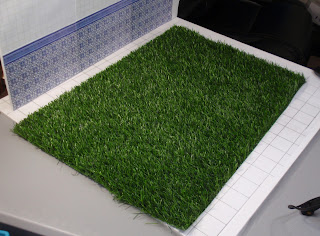 Then there were these chairs. I thought really hard about getting the red one, but decided against it. Someone on Instagram showed one of those chairs with a Tonner doll, and it looked okay, but didn't make me regret not buying one. I feel like the yellow and white chairs had too deep of a seat. They're probably made to display something-not-a-doll on, so that makes sense. 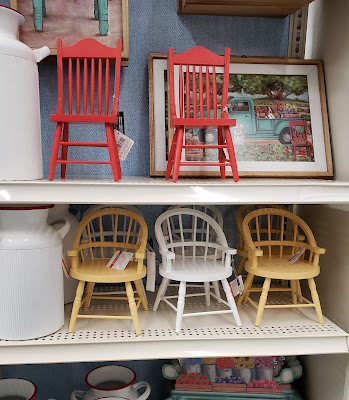 That reminds me that Michael's did have a small group of little plants of the kind that rarely need water, like a bromeliad. They might make good plants for a doll house or display. If Michael's doesn't have any more, because it took me forever to get this post up, or if you don't have a Michael's, I'm sure they can be found other places. At least in the US, these plants are another one of the things currently in style for home-decor.

Michael's happened to have these trash and recycle cans. I've seen those for a long time in other people's pictures. I think they're supposed to be for use on an office desk. 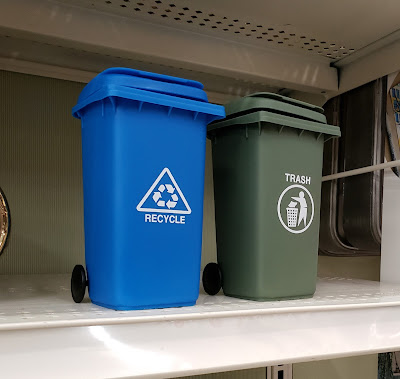 Lastly were these wall-hanging shelves. Or at least, they're supposed to be shelves. I thought they would make good side tables for dolls. Jaye of Jaye's Doll Space put up a picture on Instagram where she used the shorter one as a raised cocktail table. It's fun to see other people find the same things to re-purpose for dolls that you did. The small and large are two different size options, not the same piece. 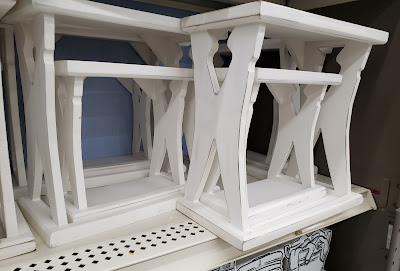 I happened to be at Hobby Lobby around the same time, but the only thing doll-adaptable that I saw, besides the dollhouse things that they sell, were these mugs and teapots. And of course the mugs and teapots aren't the same scale, unless maybe the teapot is a one cuppa size. Both items were also too big for 12" dolls, but could work with a larger crew.

How often do you find regular decor that you can use for dolls?

Posted by Barb the Evil Genius at 3:45 PM