Out With the Old, In With the New

I have been taking lots of doll pictures, but they're for things that I'm putting up on ebay. I'm doing an overhaul of my doll collection, at least the Barbie part of it. I also did finish a doll dress, but I'm not very motivated to take pictures of it, because it turn out as well as I would have liked. I should take pictures of it just to document it, though. In the meantime, I'm going to start sewing something new, and I'm waiting for two dolls I bought on ebay (with money from some ebay sales I already made) to arrive. I love getting new dolls!
Posted by Barb the Evil Genius at 1:02 PM No comments:

A Giveaway by Never Grow Up!

Never Grow Up is hosting a giveaway at her blog for her Lala-Pony-Palooza month! Go check it out and get your entry in!
Posted by Barb the Evil Genius at 9:22 AM No comments:

I love to set up dioramas for the dolls that I collect -- which may be one reason why I tend to collect the smaller dolls. Dioramas usually need good backdrops and flooring to look their best. I also snagged a dollhouse room at Target on clearance for only $15, and it needs new wall treatments and flooring. 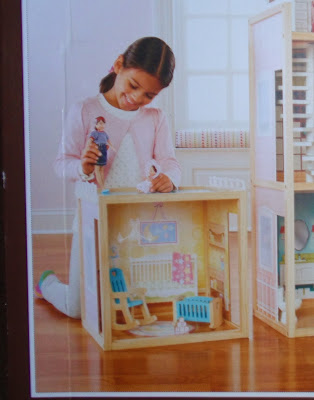 I checked out a Tuesday morning almost a week ago because I had heard there might be good doll stuff to be had there. And while I was mostly disappointed, I did find an Only Hearts Club outfit for only $4.00. I bought it with my new J-Doll vaguely in my mind, and achieved some success! 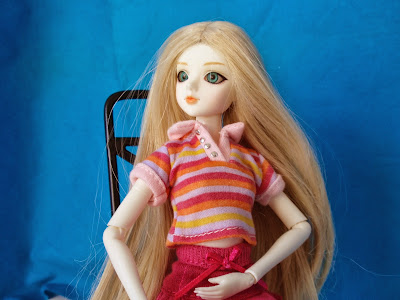 The top fits, although it is a bit short, and the skirt fits, but it is waaaaayyyyyy too short. However, any Only Hearts Club outfit with a longer skirt should work fine. I would imagine pants won't work at all. I may take the top and skirt apart to assist me in pattern making for J-Dolls, since the overall fit is fine.

Here you see my doll wearing the entire outfit. She's using the purse from the outfit for modesty. And as you can see, she is wearing the stockings and shoes that came with this set. Let's talk about those. 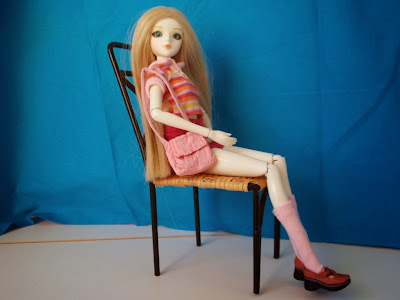 The shoes are interesting. They're made of a squishy rubber. They have nice detailing, and even come as a left and a right shoe. 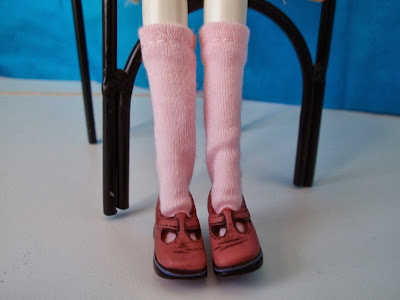 Alas, they don't actually fit the J-Doll size, although they do look okay with the stockings added. But the feet are really loose in there. Still, it works for now, and they are nice shoes. The stockings work as well, although they sometimes slide down a bit on the smooth plastic legs. Only Hearts Club doll bodies appear to be some sort of cloth, where the stockings would stay put.

The whole outfit is pretty nice quality, especially for such a small size. The little silver stud things on the side of the polo shirt, that are supposed to represent buttons, seem to be pretty firmly attached and not just loosely glued on. The little bow on the front of the skirt is a nice added detail, but what I was really impressed with was the little pieces of twill tape sewn in the inside of the skirt to add stability to the front decorative seams. 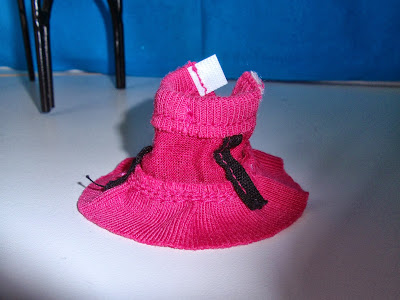 I probably should have gotten a better picture of the skirt from the outside, but if you look at the skirt up above, you can see one of the seams just to the (doll's) right, of the bow. Her hand is covering up the left seam. The seams are on a short yoke, and the skirt finished off with another tier, which you can see on the inside out skirt.

And here's a closeup picture of the shoes, from the side. The stitching and button details are neat. The rubbery material used for the shoes lends itself well to that level of detail. I even like how they kind of look scuffed-up. These are supposed to be young girls' shoes, after all. Wasn't it a tragedy when you got the first scuff on your new pair of shoes? 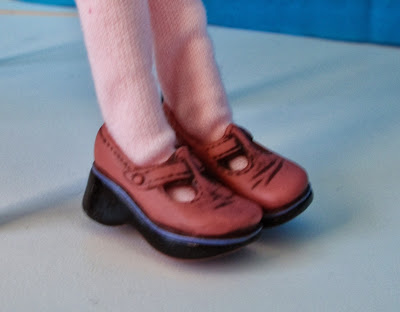 Even the purse is nice, although I didn't feel the need to take a special picture of it. But the strap has a soft velvety feel, and the actual purse has a silky feel to it. The flap is just for decoration on the side; the purse is just open. But the flap is a nice touch to have, rather than just a plain square purse. The decorative strips down the side are that same velvety material. I wish there had been more been more individual outfits made. I am eying one of the Only Hearts Club party dresses; the skirt is longer so it will probably cover up the doll enough. I'm also thinking of giving this J-Doll a new name; I kind of came up with Lindy on the fly. I might change it to Lindsay; I'm not sure if I want to name this doll and any subsequent J-Dolls I get after the names of their streets. What do you think? I have a sister named Linda, so the doll won't get named that! Right now, my girl is just glad to have some clothes to wear. The weather is starting to get chilly here!

First let me say that you can totally blame Emily, the Toy Box Philosopher for this post. If she had not posted her review of two J-Dolls, I might not have ever known they existed. But I found the dolls very attractive, and I love the quirky fashions, so several of these dolls have gone onto my wish list. Unter den Linden was not one of those, but I found her on ebay nude, and since I thought the doll was pretty but didn't want the outfit, I decided to let her be my first J-Doll purchase. At $21.50, she was a pretty affordable step into this line.

Before I review the doll, however, I want to talk Unter den Linden. It means "under the linden (lime) trees." Many famous buildings in Berlin, Germany, lie along this street, including palaces where the former Prussian royalty used to reside. During the Cold War, it was on the East German side. As a matter of fact, Unter den Linden ends at the Brandenburg Gate, which was right on the east side of the Berlin Wall. Berlin is special to me because I was there with a college group in December of 1989, about a month after the Berlin Wall was opened. Even nicer, the future Mr. BTEG was a part of the group as well, so we got to see the Berlin Wall and experience Germany together.

So what does the doll have to do with a street full of royal residences and prominent public buildings? I'm not really sure. I mean, I do get sort of a dance hall vibe off of the outfit, and Berlin had that whole crazy Weimar Republic Cabaret thing going on, so... we'll go with that.

Here's the first picture of this beautiful doll. More review and pics (some nude) below the fold. 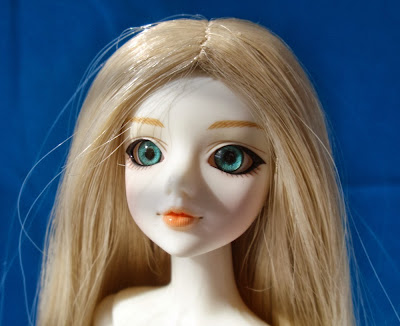 I have a bunch of nice pictures of my newest doll purchase, and Blogger is not letting me upload them. It wasn't working last night, and I am still experiencing the same problems today. Please do check back soon. I'm going to try to get my post up as soon as Blogger lets me.
Posted by Barb the Evil Genius at 11:05 AM 1 comment:

So Tonner's fall and holiday release photos have finally arrived! I suppose it is a good thing for me that I'm not overly impressed, since I can't afford many dolls anyway.

Warm-Up Basic Shauna. Was she supposed to come with ballet feet at one point? What is she warming up for? Of course, she'd fall right out of the leotard she's wearing, as it is pictured, if she tried to do anything athletic anyway.

Wow, there's a lot of Patsy stuff. She must be selling well. I'm hoping to get a Pasty of my own sometime soon. My lone 10" Sophie would like a friend to play with. I think I like Perfect Impressions Patsy the best. 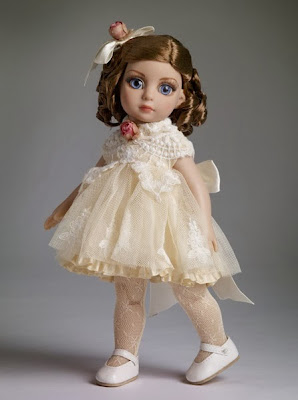 I would like to see real photos of the 22" Constance doll, but wow, $450! Also, I like the idea of the Fairytale Basic 22" doll, but the dress is pretty meh for a $300 doll. Someday I would really love to see an American Model doll in person. Sometimes I think the face looks too much like Tyler's for me to get into another line, and then sometimes I'm not sure the face is even attractive. (I do like Tyler's face.) Honestly, the picture of the Fairytale Basic doll wearing the black wig almost looks like a man in drag to me. But the closest doll store to me, about 45 minutes away, closed a while back. Sadly, that seems to be a real trend.

The 16" dolls are rather expensive too! To me, they're just totally not worth it. I guess we'll see how many collectors are willing to pay those amounts. *$125* for the Sleeping Beauty and Snow White outfits, just outfits?


I'm tempted by the 16" Vintage Basic doll, though, I have to admit. I love the Daphne face, and I've been wanting a later release blonde Daphne for ages. I'm not sure about the face paint on this one, but then the face paint in a lot of these pictures seems strange. I would imagine they might look quite different in the actual release.

The 16" Fairytale Basic doll might be pretty too; I like the sculpt from the Airline Stewardess version. Interesting that "fairy tale" seems to be the new doll trend this fall.

I hope all the new Tiny Kitty items will make TK collectors happy. She never appealed to me.

Lastly, I love the new clothes for Agnes Dreary, but not poor Agnes herself. I'd put them on one of the two dolls I have with the Marley body.


Posted by Barb the Evil Genius at 6:26 PM No comments: