I was debating what I wanted to post next on, now that I'm back to everyday blogging, when Mr. BTEG presented me with a couple of doll items that he made for me with his 3D printer. That made me happy, and my choice of post easy. But I'm going to start at the beginning of my experience with 3D printing for dolls, for those of you who haven't been reading me for years, or don't recall previous posts.

In January of 2016, I tagged along with Mr. BTEG at a technical conference he was attending. The conference happened to conveniently be held at a large indoor waterpark, which especially in a NE Ohio winter, is very appealing. Mr. BTEG had already started exploring his interest in 3D printing, and he pointed me to a website called Thingiverse, where I discovered that the late lamented Makies Lab had put up several free downloads for prints, including a tea set. The conference offered free 3D prints, so Mr. BTEG had them make the tea set for me. As you'll see, the set is very primitive compared to some of the other things that I'm going to show you, but just being able to have something printed for your doll like that *snaps* was still very exciting. Here's Meg, my only Makie, holding the tea pot from that set. 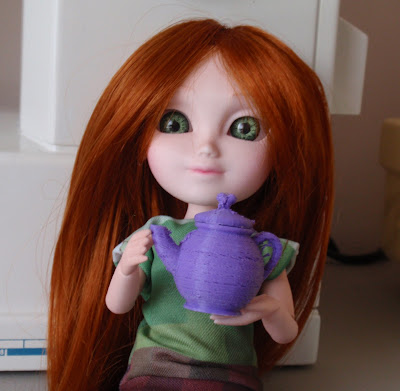 Then Mr. BTEG invested in a lower-end 3D printer of his own in January 2018! I had no idea how hard it was to set up a 3D printer to make a suitable print. It can take hours to make sure the printer lays down filament correctly, so that the filament doesn't get shifted, and throw the whole print out of whack. Here's a couple of examples of common prints made to test your 3D printer. 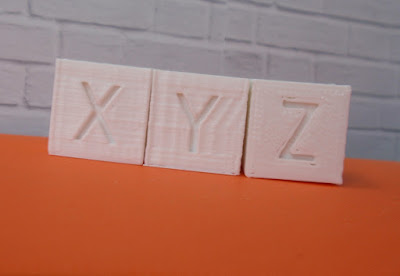 The above are blocks printed out to test the X, Y and Z axis of a print. The background is one of my Barbie diorama walls, so you can see that the blocks are fairly small. I hope you can also see the "shadow" of the Y on the middle block, which meant the Y axis needed some work on that particular print. 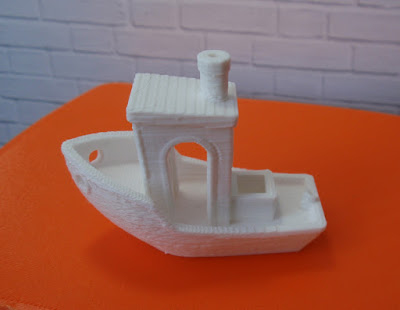 The piece above is called a "benchy," and is also apparently known as "The jolly 3D printing torture-test." Obviously, you don't print this out until you're a bit more confident in how your printer is configured. You can visit 3DBenchy.com to check out all the creative things people do with benchy prints. It's also the source for my quote above.

Come see what else he made below the fold! 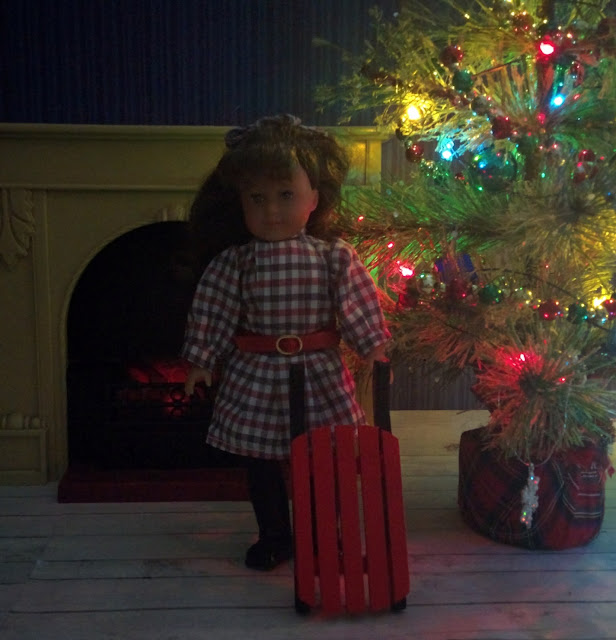 Here we are at the last day of Christmas, and Samantha is showing off her Christmas sled. I wanted to show the Christmas tree lights to their best effect, but also the glowing embers in the Sindy fireplace. I bought the fireplace off eBay, and there's a bit of a story here telling how I got the light inside working again.

It is my dream to someday make a doll-size Victorian Christmas tree, with ornaments that look authentic to the period. That may very well end up being 18" Samantha size, as it would certainly be the easiest scale to work with, I think. I certainly enjoyed having all of you around for these last twelve days, so thanks for stopping by, and especially commenting!

The BTEG family is very interested in foreign languages. Mr. BTEG studied Latin, German and Attic Greek, as well as being exposed to Italian growing up. I studied German and Spanish; Mr. BTEG and I went on a college trip to Germany together. Several of the ornaments on our Christmas tree have greetings in another language, so I thought they would be good for a photo shoot with a couple of my 8" Madame Alexander Travel Friend dolls. 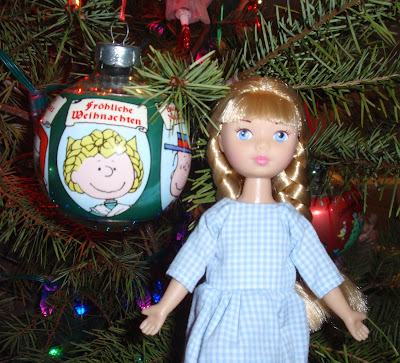 My Germany doll poses with an ornament that says Merry Christmas in German, French, Italian, Spanish and English. 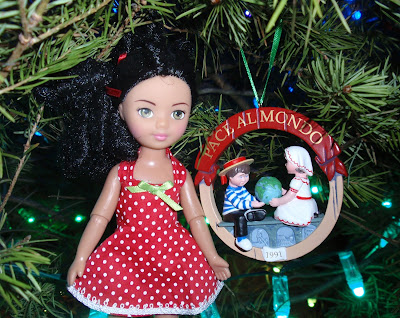 My Italian doll poses with an ornament that came in a series. There are only three ornaments; each has a boy and girl in representative costumes of the chosen country. Each says Peace on Earth on the front in the given language, in this case "Pace al Mondo." All three ornaments say Peace on Earth in English on the back. 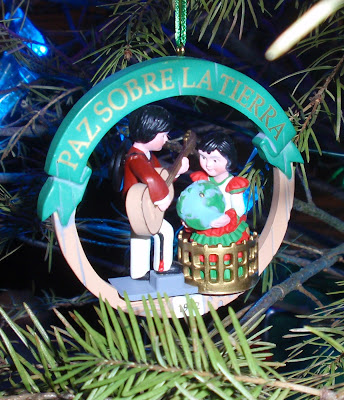 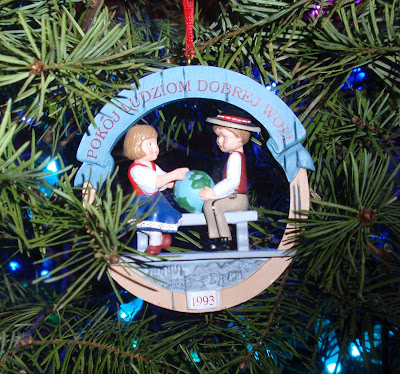 Italy was the first one in the series, then Spain, then Poland. I really wish that they would have continued this ornament line longer. Only one day left of the Twelve Days of Christmas! 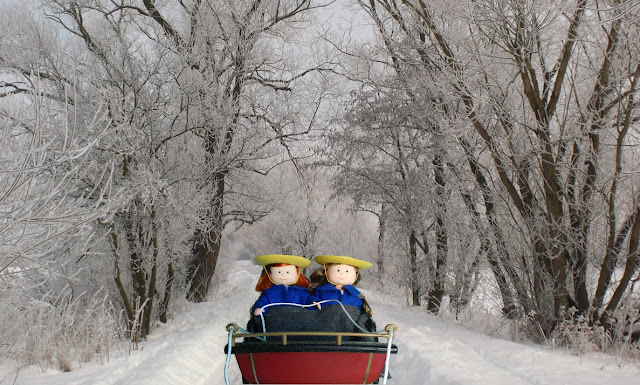 Down a cold road near Paris,
All covered with snow,
Drove two little girls,
Through the chill wintry glow.

Twelve Days of Christmas - Day Nine: Ever After High 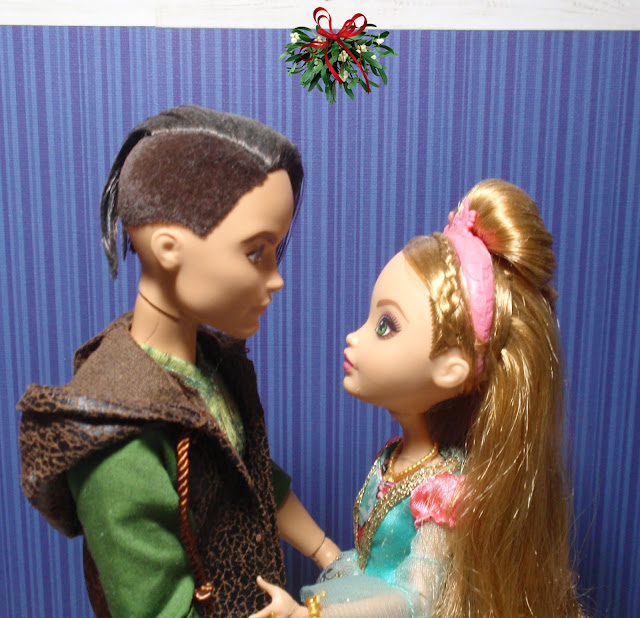 Hunter and Ashlynn share a special moment.
Posted by Barb the Evil Genius at 10:59 PM 4 comments: 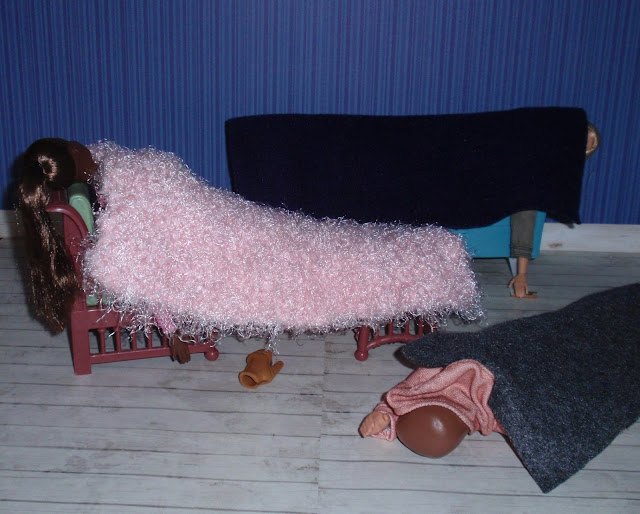 Nope, Barbie and her friends didn't get drunk last night, but they did stay up late, and party hard, and partake in some alcoholic beverages. I didn't party at all last night, but I rather feel like this myself. I'm so tired of this cold that the other two members of the BTEG household and I have!
Posted by Barb the Evil Genius at 6:02 PM 4 comments: