With the more relaxed pace of summer, and only having one daughter at home, I've been trying to work hard at sewing, in the hopes of opening up an Etsy store for doll clothes soon. Today, I completed a dress that fits the Madame Alexander Travel Friends. I'm not happy with the bunchiness around the sleeves, but I think that was partially from trying to loosen the armseye up a little, because last time I thought it was too tight. I'm such an awful perfectionist, and I need to work through that if I'm going to sell my work. I'll never get anything up for sale if I'm never happy with what I sew. 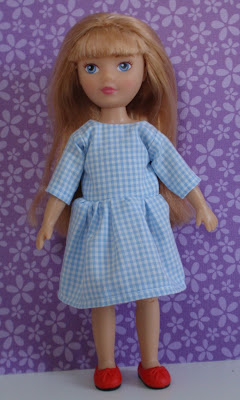 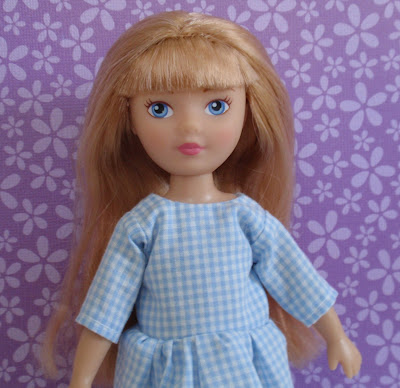 I really love the dress on Russia. The blue just seems to suit her hair and eyes. I think next I am going to work on making a dress for the Mini AG size. I should be able to tweak this pattern a bit. Believe it or not, the Mini AG has a bigger chest circumference than the Travel Friends, at least the stuffed Minis.

My daughter has been gone all week at a youth conference, so her cat has been following me around for company since her girl was gone. I was taking some pictures on the floor today for an eBay auction, and Agatha decided to insert herself into the photography, as cats do. So here's a picture of one of our beloved kitties. 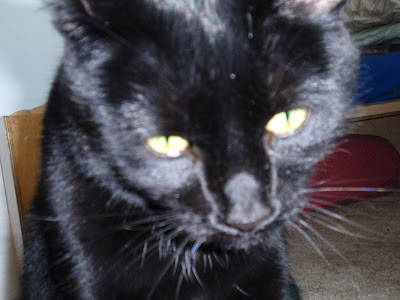 I know basements, or cellars, aren't common in many areas of the world, but here in Northeast Ohio, they are extremely common. They usually have the washing machine and dryer, and the utility tubs, large tubs for cleaning things that would be impractical in the other sinks in the house. Before showers were common, utility tubs were apparently even used for washing hair, which is what my mother taught my sisters and I to do when we were old enough to reach over to the faucet. It wasn't until we got a little older that we realized that we *did* have a shower, and we could use that to wash our hair, like our friends did!

Moving on from that bit of history and nostalgia, basements are also used to store things that are wanted, but aren't used often enough to have them take up space in the living areas of the house. Holiday decorations or camping supplies are a common example. However, my mom's basement needs some serious waterproofing, and it was largely for that reason that my sisters and I needed to clean out what was unnecessary in the basement, either throwing things away, donating things to charity, or taking what was precious up to the first floor now that my mom has the whole house to herself to store things.

We found some interesting things down there. A few newspapers headlining the end of WWII in Europe, or the first moon landing. My mother's high school diploma, tassel, and class picture. But my mother had also stashed lots of old toys belonging to my sisters and I down there, and I want to show two of my old dolls today.

The first one is probably my very first doll. I received her from my grandparents for my first Christmas when I was six months old. She's dirty, her rooted hair is matted and dried out, and her dress is dirty. Her hollow torso is of a cheaper plastic than the limbs. Her only marking is U11 on the back of her head at the hairline. Here she is after years of play, and a few extra decades spent in a basement. 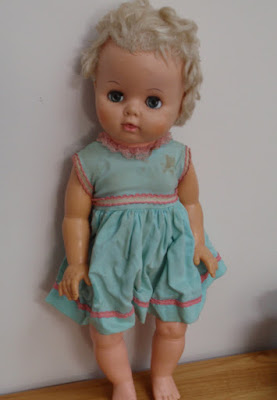 Here I am as a baby, sitting on my grandmother's lap, with the doll on my lap. My mother's hands are also in the picture. Please excuse the poor quality photo; this is a screen shot from an old Super 8 home movie, converted to DVD. 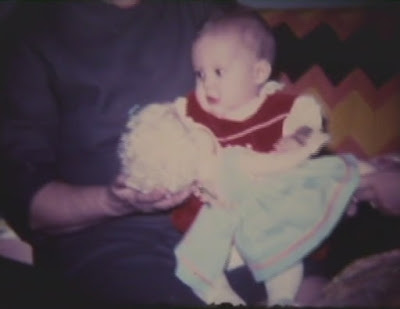 The other doll I discovered who was worth taking away, was my Rub-a-Dub Dolly, made by Ideal. Her main characteristic was that she was supposedly waterproof, so she could be played with in the bathtub. Her initial release date was 1973, so if I got her that year, I would have been five. I don't think I have any old photos of her, but I found a website where a girl put up a picture of herself having just received her Rub-a-Dub Dolly. Click here to check that out.

As you can see, she came with a hooded towel, and underpants which probably should have been a diaper except that would be impractical for water play. My mother sewed a bathrobe for my dolly as well. Based on some other items found down the basement, it looks like my mother used one of our old baby receiving blankets to make the bathrobe. Here is Rub-a-Dub Dolly showing every bit of her forty-two years, poor thing. 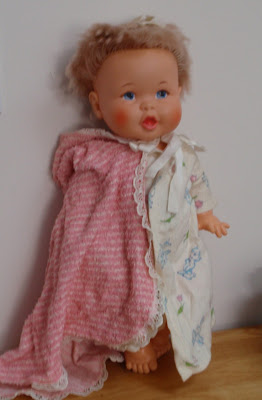 I think my mother would have preferred us to play with dolls like this for our entire childhood, although I'm not sure of her exact reasoning. One Christmas, though, my aunt gave my sisters and I Malibu Barbie and Skipper, with the really cool tan lines, and the damage was done. In my case, it launched me to a lifetime of both doll collecting and sewing, for dolls and otherwise. (I enjoyed hand sewing clothes for my Barbie dolls.)

The question is now, what do I do with these dolls? If they were to be given away, they'd have to be cleaned, rerooted, and get new clothes. I don't do rerooting, and I'm not inspired to sew for dolls this old. Would it be terrible just to throw them out? I have a bad habit of anthropomorphizing things like old dolls and stuffed animals, when sometimes they are just too worn out, or there isn't a need for them anymore. Once they were given away, I wouldn't know what eventually became of them, and that might even bother me, silly though I am. Know if any old dolls like this have been successfully given new lives?
Posted by Barb the Evil Genius at 1:31 PM 18 comments: