At the Toy Store

Mr. BTEG and I headed out yesterday to do some after-Christmas shopping. The first place we went was a local store named Recess. It is primarily for adults who play table-top games, but the store also carries some high-end toy lines. I wasn't planning on taking any pictures until I saw this set by Breyer which Emily would love: 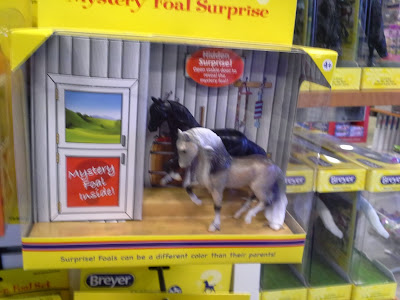 It's a horse set, with a surprise element! Foals can be a different color than their parents! I presume the sire and dam are the two horses that we can see. It's a cute idea, and of course you want to buy more than one to see what colors of foals you can find.

Email ThisBlogThis!Share to TwitterShare to FacebookShare to Pinterest
Labels: Breyer, Ever After High, horses, My Little Pony, Recess, Target

I've been wanting a blond Daphne for ages, but I'm particular about which one(s) I would like, and I haven't been able to swing the high prices those Daphnes end up going for on eBay. I was really looking forward to the new Vintage Basic, and hoping she could make her way under my Christmas tree. Unfortunately, she's not even out yet, with no information on when she will be making her appearance. As a stay-at-home mom with two daughters, Christmas is often the best time for me to get the bigger ticket items that I would like, and anything over $100 is a bigger ticket item for me. So that's a disappointment. I'm hoping I will be able to buy this doll when she does come out, and yes, I do know that there are doll stores that offer sales and such that will make her more affordable.

On the other hand, I'm impressed that the Tonner doll page actually wishes its customers a Merry Christmas. And I wish the same to all of you! I probably won't be on here again until after the 25th, unless I can get my dolly Christmas tree set up, and I imagine most of you will be busy too. I hope you all enjoy the Christmas holiday.

Posted by Barb the Evil Genius at 11:30 AM No comments:

I've been having some health problems lately, so unfortunately I haven't been getting much done, in real life or on the Internet. But while I was shopping at Target today, I snagged some pictures. Sorry that most of them are blurry.

If you have a larger size young child doll, she might enjoy finding a few toys under her tree at Christmas. These were in the ornaments section. At $8.00 each, though, you might want to try to snag one during the after-Christmas sales. 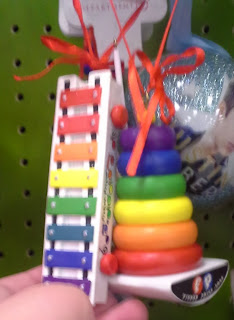 The Monster High dolls get a crossover car, and a cafe. I guess in Scaris you need a good cafe or deaux. Although I'm not into Monster High, I am interested in seeing what kind of playsets will come out of the Ever After High series. I wonder if we will see a pumpkin carriage instead of a purple convertible? 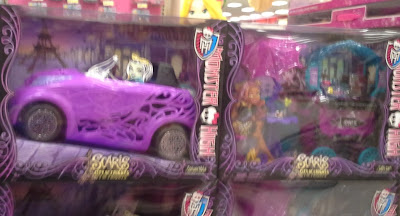 Speaking of Ever After High, there were only a few of those dolls, and they were wedged in here and there around this MH Once Upon a Time series, a Target exclusive. It seems like Ever After High hasn't really hit its stride yet, at least at this Target's toy display. On the other hand, of course Target would want to feature its exclusive Monster High stuff. 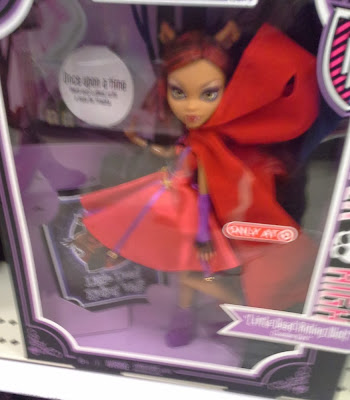 This picture and the one below were it for the Pinkie Cooper line. I'm not even sure what this line offers right now, but these four dolls don't pack much shelf presence displayed as they are. Maybe once all the clearance Winx Club dolls are gone, Pinkie's display will look better. Right now they are just four dolls with dog faces, not its own world to explore and have fun with. 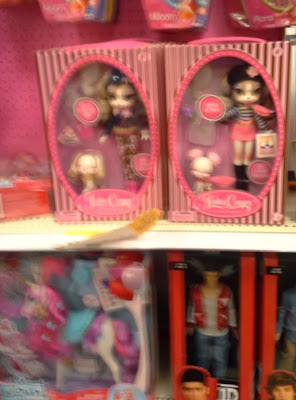 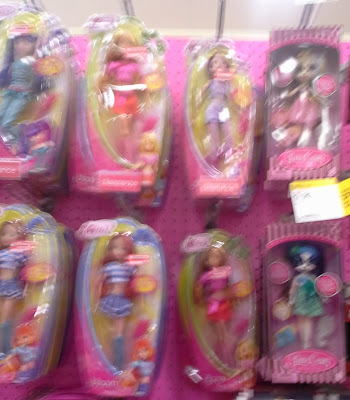 Oh. Oh my. Poor, poor Anna. The animated character's eyes are slightly off in an endearing way. This doll looks like she needs eye surgery. I kept thinking about the Island of Misfit Toys while looking at this doll. This doll wasn't the only stuffed Anna with this issue, either. 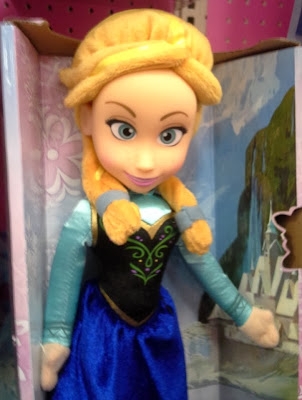 I liked the idea of a doll and a matching dress for the child, all in one box. However, when I looked at the picture at home, I realized they should have made more of an effort to make the doll's dress and the child's dress look more alike. Yes? Looking at the Disney Princess stuff reminds me of the year we went to southern California over Thanksgiving for a friend's wedding. Our daughters were not quite six and almost three. We did a lot of Christmas shopping that year at Disneyland and LEGOland. Among other things, our youngest daughter got a Cinderella tiara and a pair of Cinderella dress-up shoes for Christmas. They also each received a doll this size of their favorite Disney princess at some point. 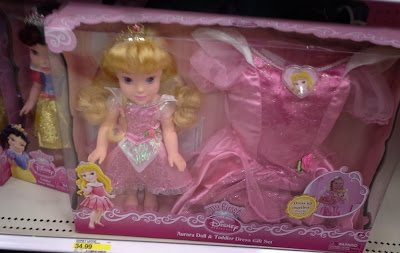 Despite the wonky eyes of this doll (what is it with the wonky eyes?) she has cute accessories. Among other things, there are a "balloon" animal, cotton candy and a candied apple. I wonder if the books help sales, or is it almost just an expected thing anymore with 18" dolls? 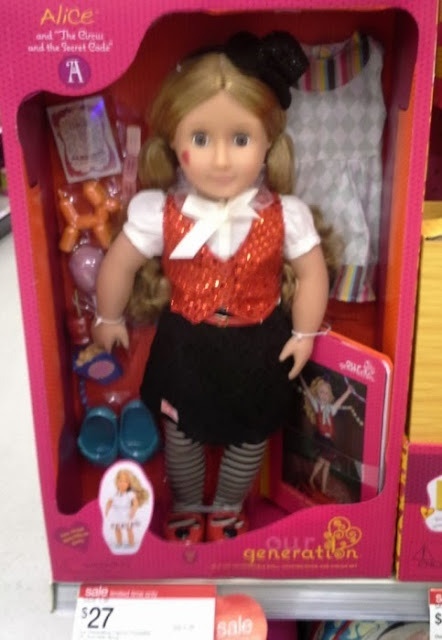 Lastly, I know a lot of you like Hearts for Hearts dolls. There were two each of these two on the shelf. That seems about average for this line here, not fully in stock but not sold out. 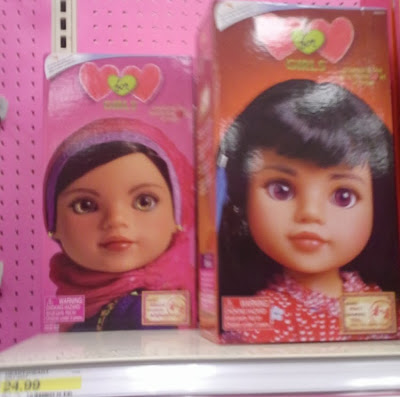 Honestly, I didn't see much to interest me at all. Of course, I'm not interested in Monster High or Frozen, and I don't have little girl daughters anymore, so those things might be big contributors. Monster High, Frozen and Target's Our Generation line were the winners as far as attention paid to display, with Disney princesses in general coming in next, so if you're interested in any of those dolls, there was lots to choose from. I expect Ever After High to have its own section next Christmas if sales in 2014 go well overall. Otherwise, everything at this Target just seemed kind of packed in here and there. Even Barbie seems to be a mish-mash of themes (Fashion! Sisters! Life in the Dreamhouse!) and nothing stood out as special. Plus as I said above, the quality on some of these lines was a bit disturbing as well. Meh.