Shopping at the Grand Pacific Junction area, or How I Got a Light Bulb for My Fireplace

I bought the Sindy fireplace, seen in my previous post, years ago on ebay. It came without a light bulb, and I'm pretty sure I bought it from the UK, because I remember wondering if I could even find a bulb the correct size here in the US. It was never a priority, and I wasn't sure where to look anyway, so it never got done. But with my rediscovery of the mini store near me, I decided perhaps the proprietor would be of some help finding a way to make this fireplace glow.

Grand Pacific Junction has been a quaint shopping area since 1989. I'm pretty sure the buildings that look old really *are* old, and someone cleverly decided to make a shopping destination there. The mini store is not in one of those oldest buildings, but in a more modern strip of stores. You can see that it is directly beside the railroad tracks. 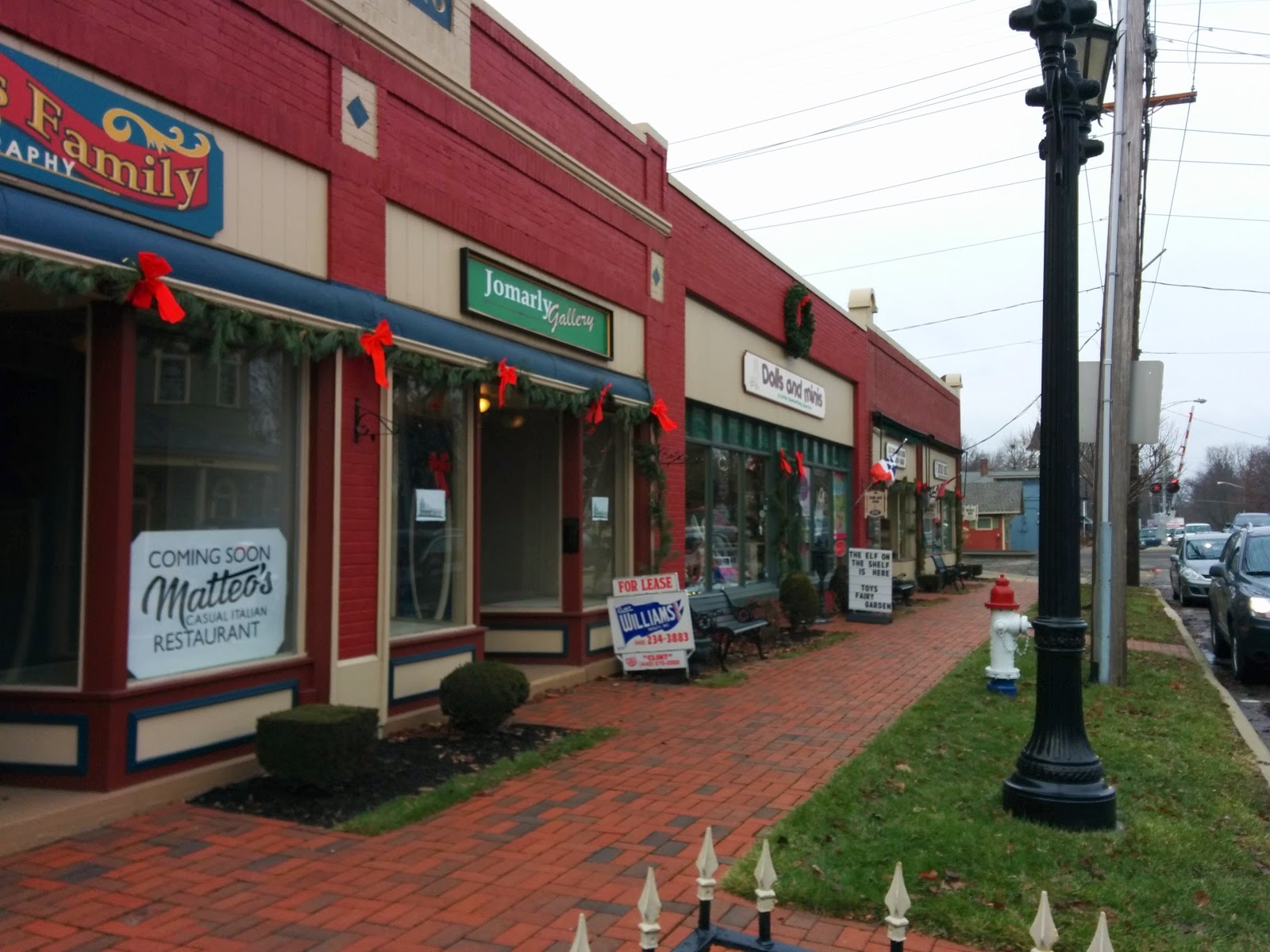 I let the store owner have a look at the fireplace, and she told me she didn't have what I needed, but that she was sure the man in the store next to hers would be able to help me. That's his store all the way at the far end, called The Music Box. I was hopeful because the minis lady seemed so positive, but I wasn't sure what I would find. She also very nicely offered to work with him together to get me what I needed, if he didn't have something right away.

The Music Box turned out to be a little bit of many different things. There was a long rack full of vinyl records, some miniature train merchandise in its own little room, some sheet music, and in a big room to the side were some organs. There might have been other musical instruments there; I didn't go in to look around. There were also a few odds and ends, like some vintage reel to reel tapes in a stack on the counter, and some clocks made of older items like vinyl records hanging on the walls. The counter itself was very crowded with catalogs and things like the tapes.

The owner is an older man, I'm guessing in his 70s. He guessed almost immediately what size bulb I needed, and went to a back room full of cardboard boxes on shelves, to rummage around for it. I could see part of the room from where I was standing at the counter, and it added to the whole mishmash feeling of the store. The owner emerged with a small box, which he searched through until he found the size he thought I needed, a three volt flashlight bulb. He screwed that in for me, which was made a little difficult by the fireplace grate. He also put in two batteries, after carefully cleaning off the contacts in the back of the fireplace. It didn't work right away, but after a little more work on the contacts, it did! The gentleman was talking the whole time about the voltage and what kind of pull the batteries made (he noted that they both face the same way, which apparently means it's not strictly a two-battery fixture.) I could tell that he really loves electronics, especially after he pulled out a huge black and white catalog, filled with tiny lines of part numbers, and gave me the specific stock numbers for that bulb, for when I need to buy it again. I would have bought more from him, but he only had one left. So for less than $2, I left with the bulb, two batteries, and the pleasure of meeting someone extremely helpful, from a rapidly vanishing era. He reminded me of some older guys who comment on a blog that I read. They've talked about how great it used to be when Radio Shack actually sold radio parts, and how as boys they'd dream about electronics that probably came from a catalog similar to the one this store owner pulled off of his desk. Not a world I'm interested in, but not one populated by dummies, certainly.

So let's take a look at some of the other stores! We'll start with my second favorite store, Abigayle's Quiltery. In the room inside that must have been the dining room at one time, there are some beautiful built-in cupboards, with lead glass in the doors. I covet those badly. I didn't see any fabric that needed to come home with me that trip. They do sell my brand of sewing machines, Bernina. 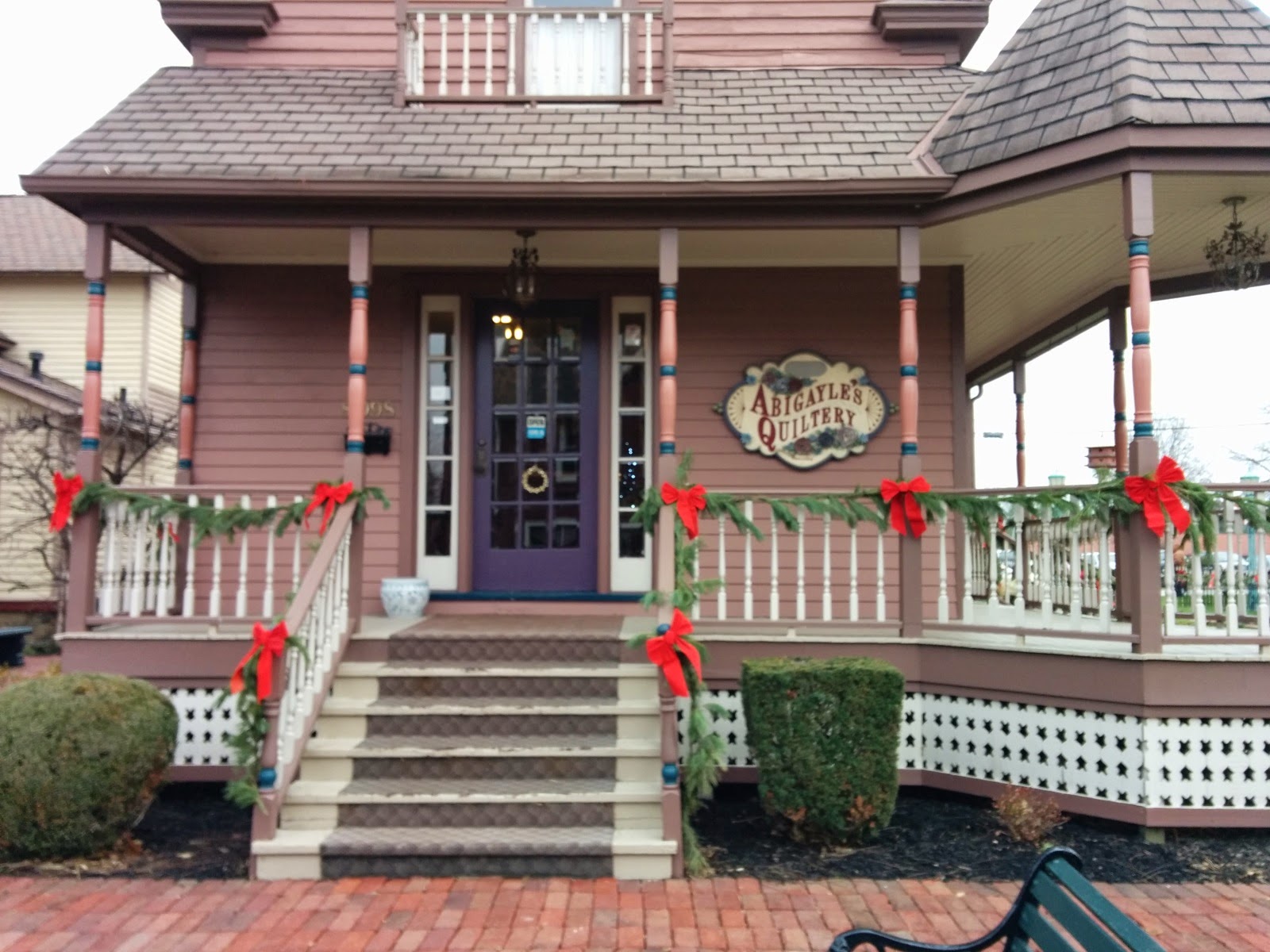 Many of the smaller stores are built around a green. All of the stores there are within easy walking distance from each other. 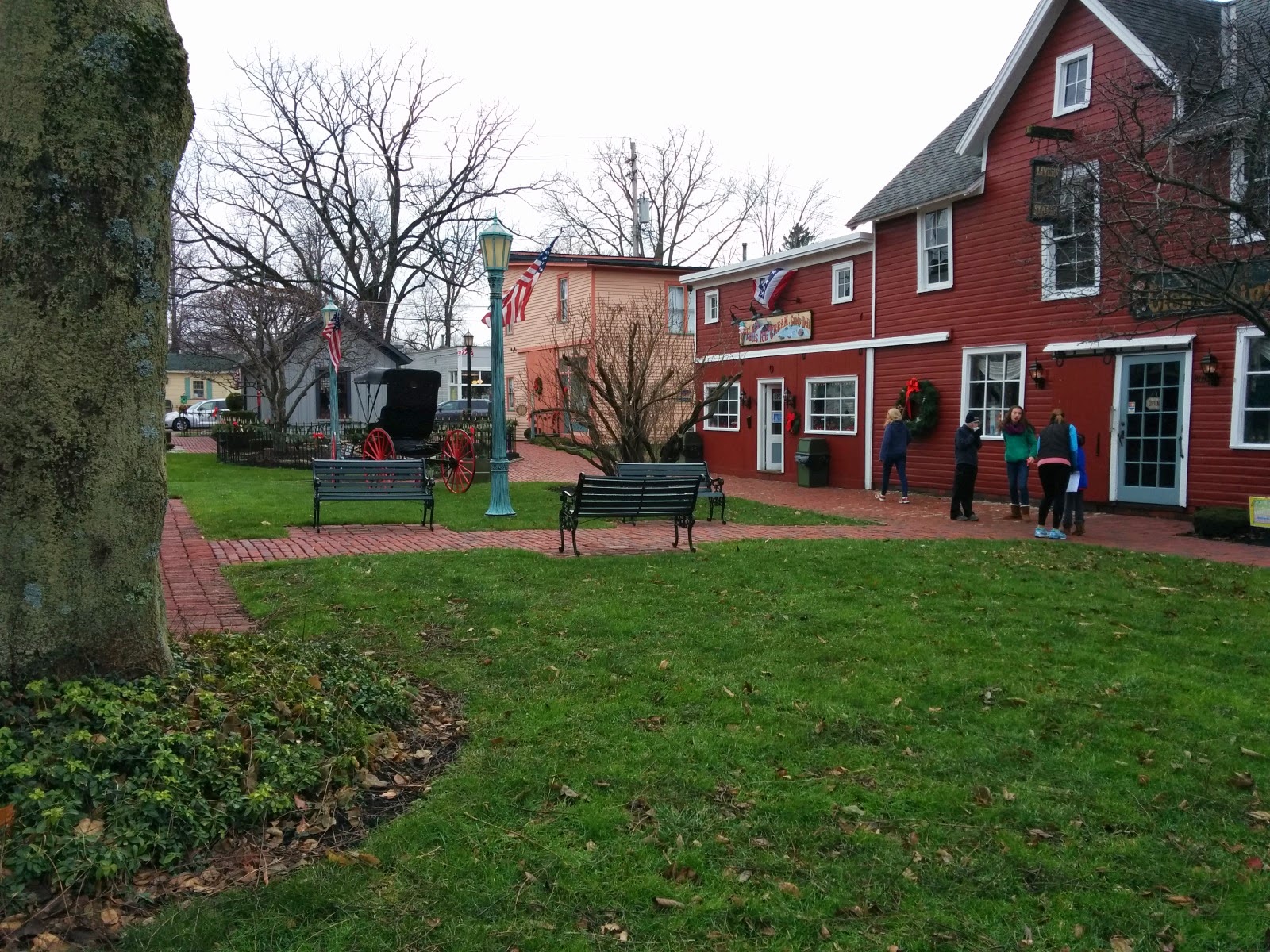 There is a full size old-fashioned train engine, with a car connected, by the central parking lot. I didn't get a picture of that; there were many people milling around it that day. Horse-drawn wagon rides were being offered for the Christmas holiday, and the starting and stopping point was in a gazebo right next to the engine.

This building below looks very much like the typical Midwest train depot. There's several of them dotted here and there in my area. All the ones that I know of have been turned into retail establishments, like this one. I'm not entirely certain that this is an original building, but I'm guessing it is, and that it was moved from the nearby tracks. Face painting was offered here that day, again as a holiday draw. 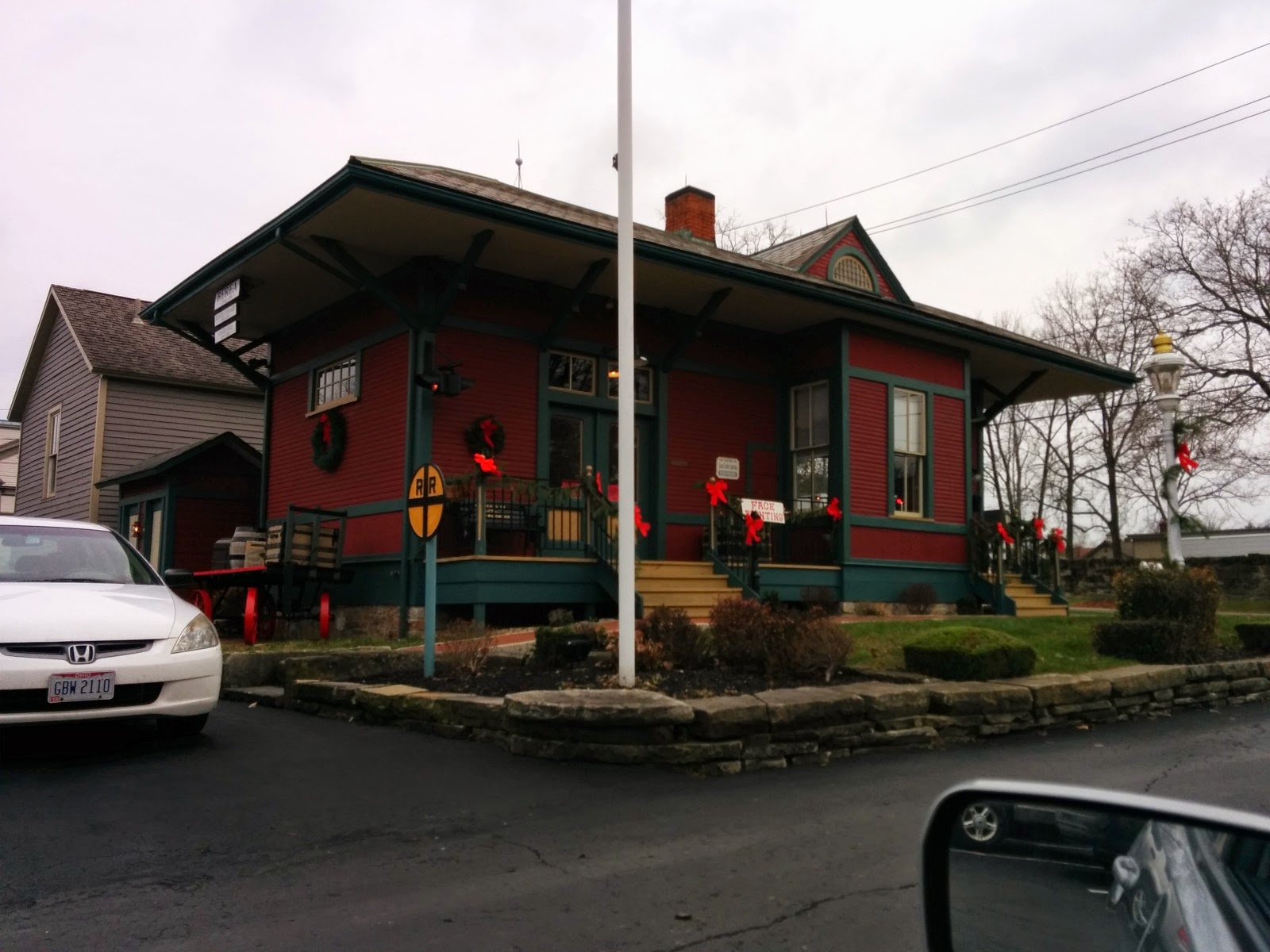 There's a old-fashioned telephone booth. Not very period, and I'm pretty sure these were only to be found in Great Britain, but I love the things for some reason, so I'm not picky. 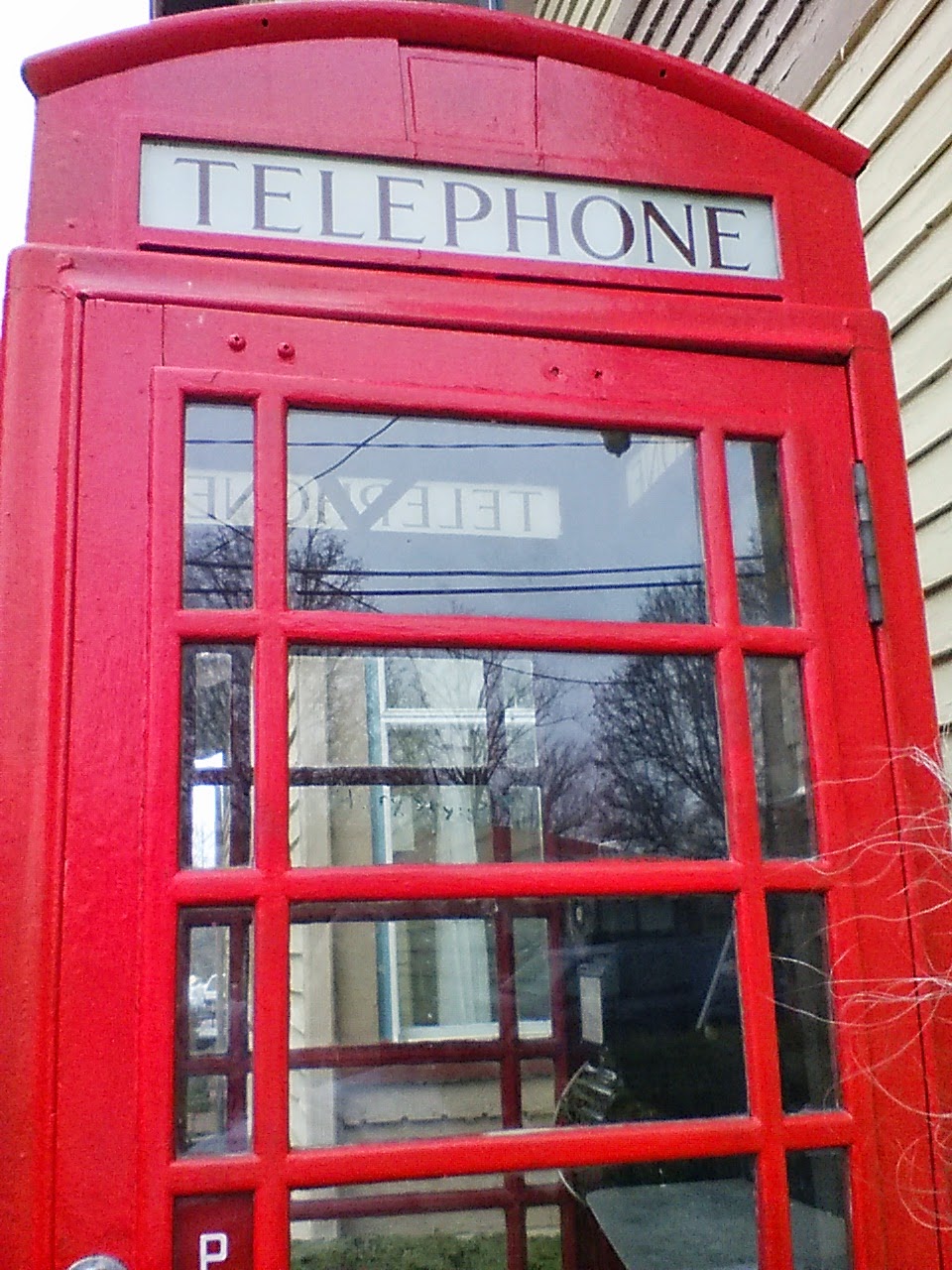 And here is the Grand Pacific Hotel building itself. It was built between 1830 and 1840, and is currently a banquet hall, in conjunction with a wedding chapel and wedding garden. The wedding garden is just a very short walk and across the street from this hotel. The wedding chapel is just a few buildings on the other side of the train tracks in the miniature store picture. You can see a corner of the hotel on the left side of the depot picture above. 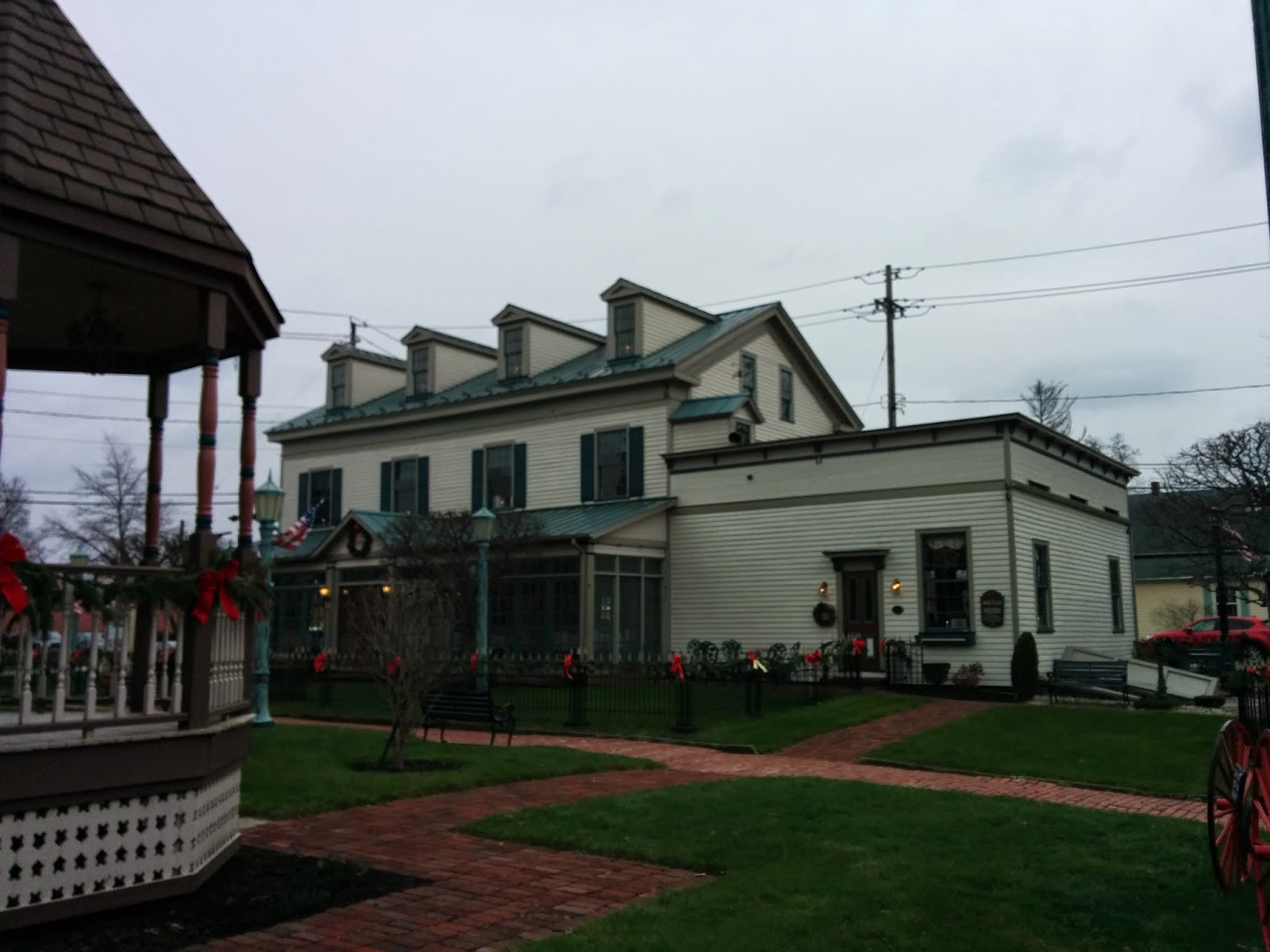 I'm not sure how many weddings this area draws, but the overall area, as well as the restaurant across the street, were certainly very busy with holiday shoppers. It probably doesn't hurt that there is more modern and general needs shopping, like a drugstore, just south of the corner above. I applaud the developer who came up with the idea of making this place into a quaint little place to eat and shop, instead of what was probably a bunch of not very well maintained vintage buildings. It was a fun trip, and successful too!
Posted by Barb the Evil Genius at 1:45 PM 14 comments:

Have Yourself a Merry Little Christmas

After a Christmas tree, very few things say "Christmas," like a fireplace. Madame Alexander agrees, as a fireplace was front and center in the Santa Baby Set for the 16" Alex doll. This Christmas, I made it a priority to find a light bulb for the Sindy fireplace I bought from ebay several years ago. I didn't get stockings or lights on the fireplace, but there is a nice array of Christmas cards on the mantel. Please excuse the dimness of the picture; I wanted to show off the cozy glow of the fireplace to its best effect. 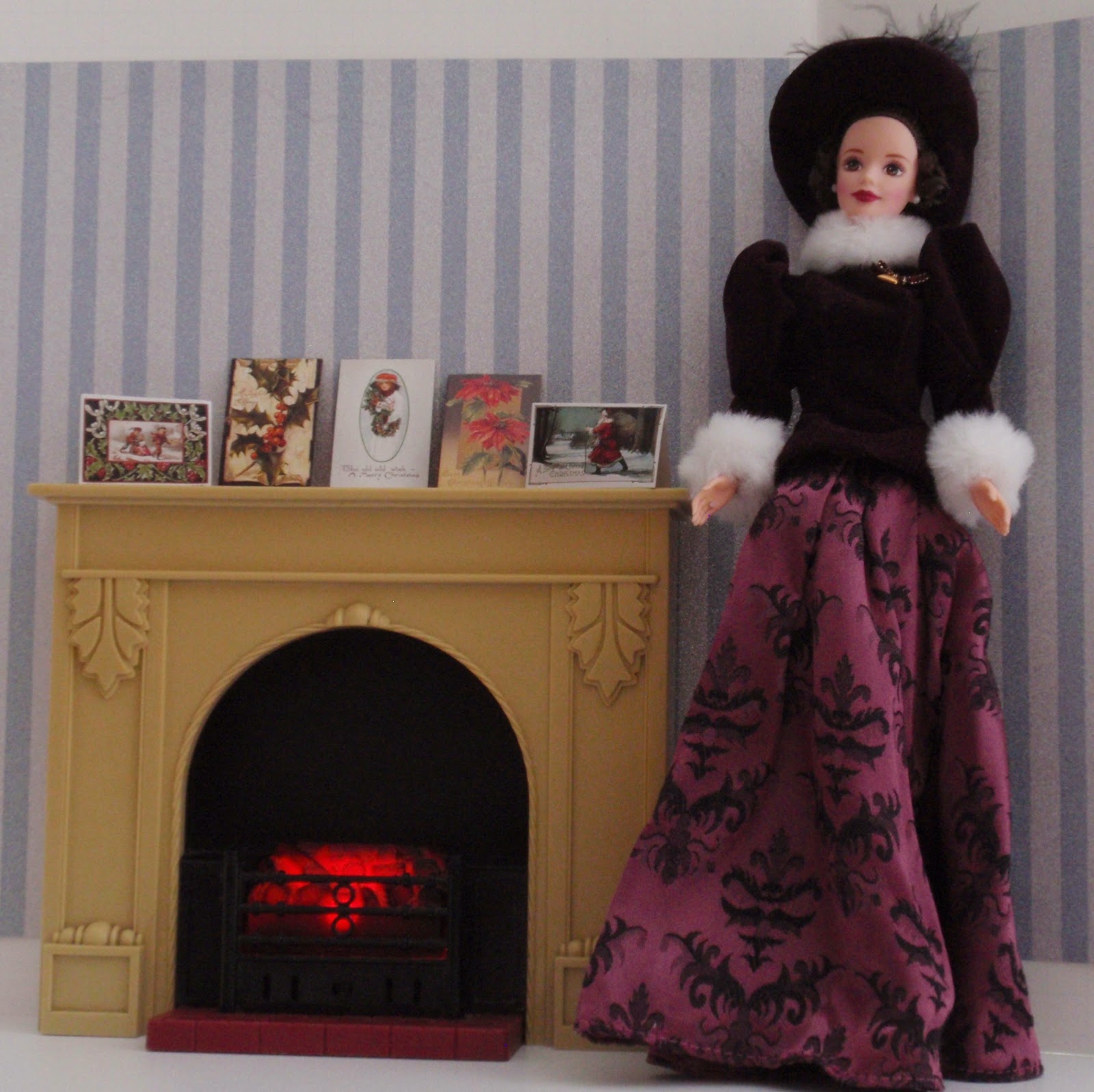 I want to paint the fireplace white; the years have left this piece rather yellowed.

Did any of you get any doll goodies for Christmas? I got a J-Doll. I think next I am going to post, however, on how I picked up the light bulb. It's a fun little story, and it will feature some photos of the little shopping area in Olmsted Falls that I promised to post about a long time ago.
Posted by Barb the Evil Genius at 3:18 PM 10 comments:

Since I've been too busy to post very much, or at all, this is going to be a two-for-one post. I'm going to introduce my two 18" Miss Americas, and I'm also going to show the one doll wearing a dress that I made from a Dale Rae Designs pattern. I'll be going into more detail about the dress on my doll sewing blog, which I've neglected horribly since I haven't done sewing for a while.

Tonner's 18" Miss America dolls were not on the market very long; they were produced in the early 2000s. Tonner produced a redhead, blond and brunette, and they came in a swimsuit version and a formal wear version. The brunette also came in ballet wear, presumably for the talent competition. There were a couple of outfits produced as well, one which I remember included a Miss America ball cap and casual wear. Miss America shared a body with Tonner's Kitty Collier dolls. Kitty Collier's story was that she owned a dress shop in... the late fifties, early sixties, taking a stab at it by the clothing style. There were several dressed Kitty dolls produced, and several separate outfits. 10" Tiny Kitty and her friend Simone proved more popular with doll buyers, although I remember reading that 18" Kitty is one of Tonner's favorite dolls.

I've considered selling the two dolls I own off. They aren't super articulated; their arms are jointed only at the shoulders, although their knees bend. And I don't know anyone else who owns these. But... I love their faces. I find them hauntingly beautiful.

We'll start with redhead Miss America, wearing formal dress. She came with a tiara, scepter, and Miss America sash, for her triumphant turn down the runway. I still have the tiara as above, and the scepter. 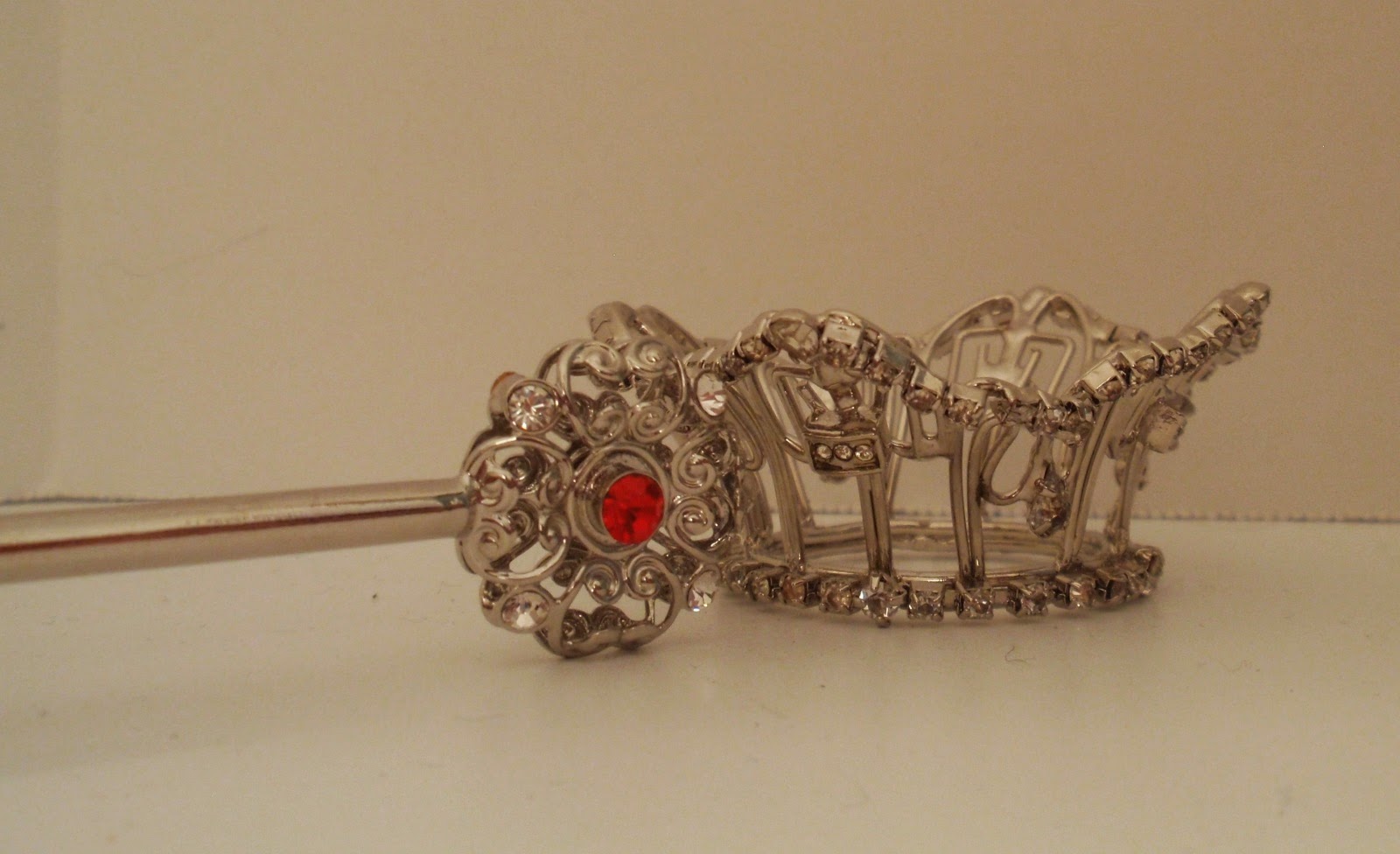 This Miss America wears a beaded brocade dress, with a column underskirt and train-like overskirt. She also has gloves, earrings, necklace, and matching brocade shoes. The necklace annoys me slightly because it is just that little bit too short so that the weight of the clasp is the heaviest part and pulls the necklace down in back. 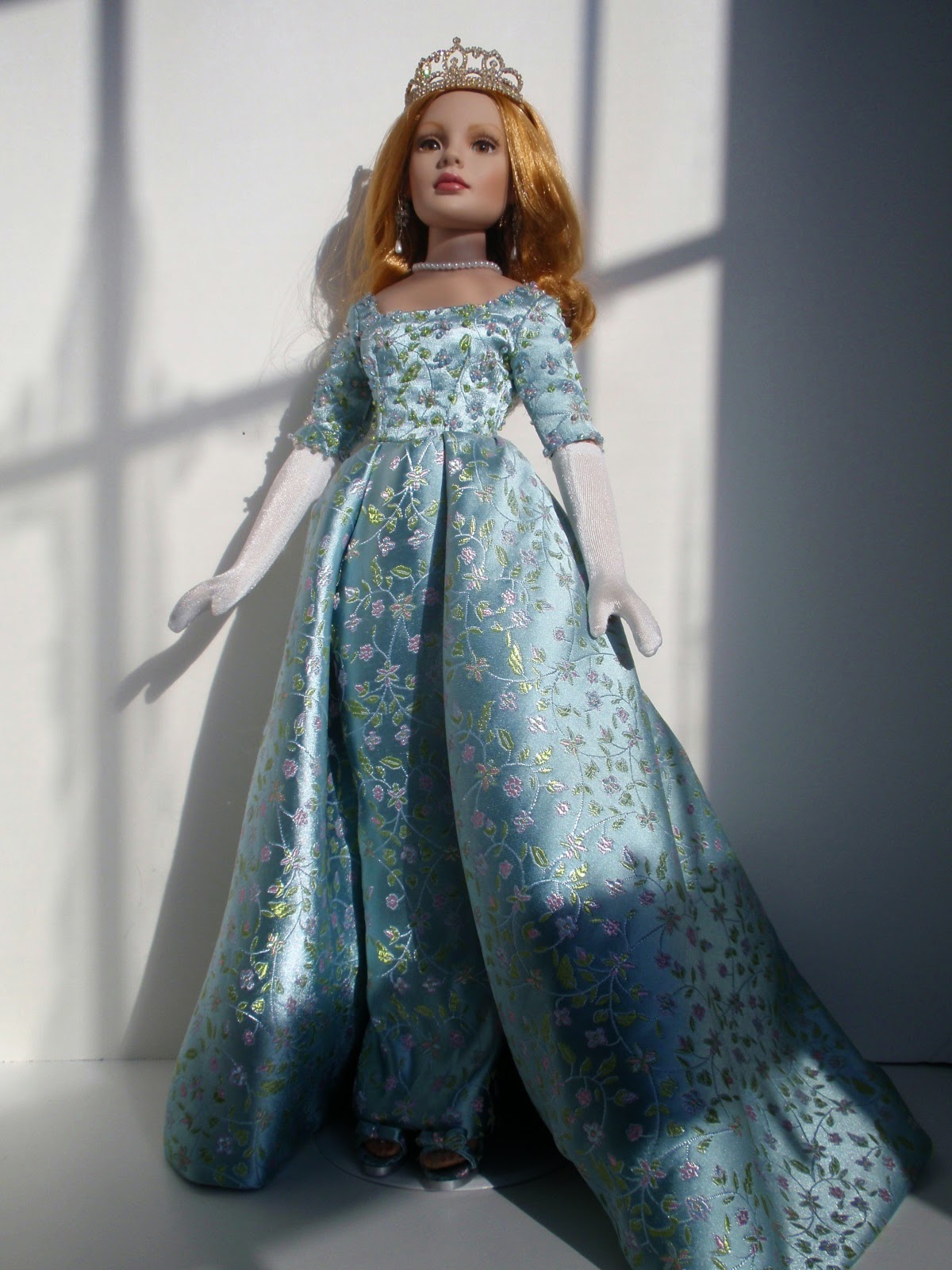 The other doll I have is the blond Miss America who came in bathing suit, earrings, and slip-on heels. I think she had the sash too. She was essentially basic Miss America. 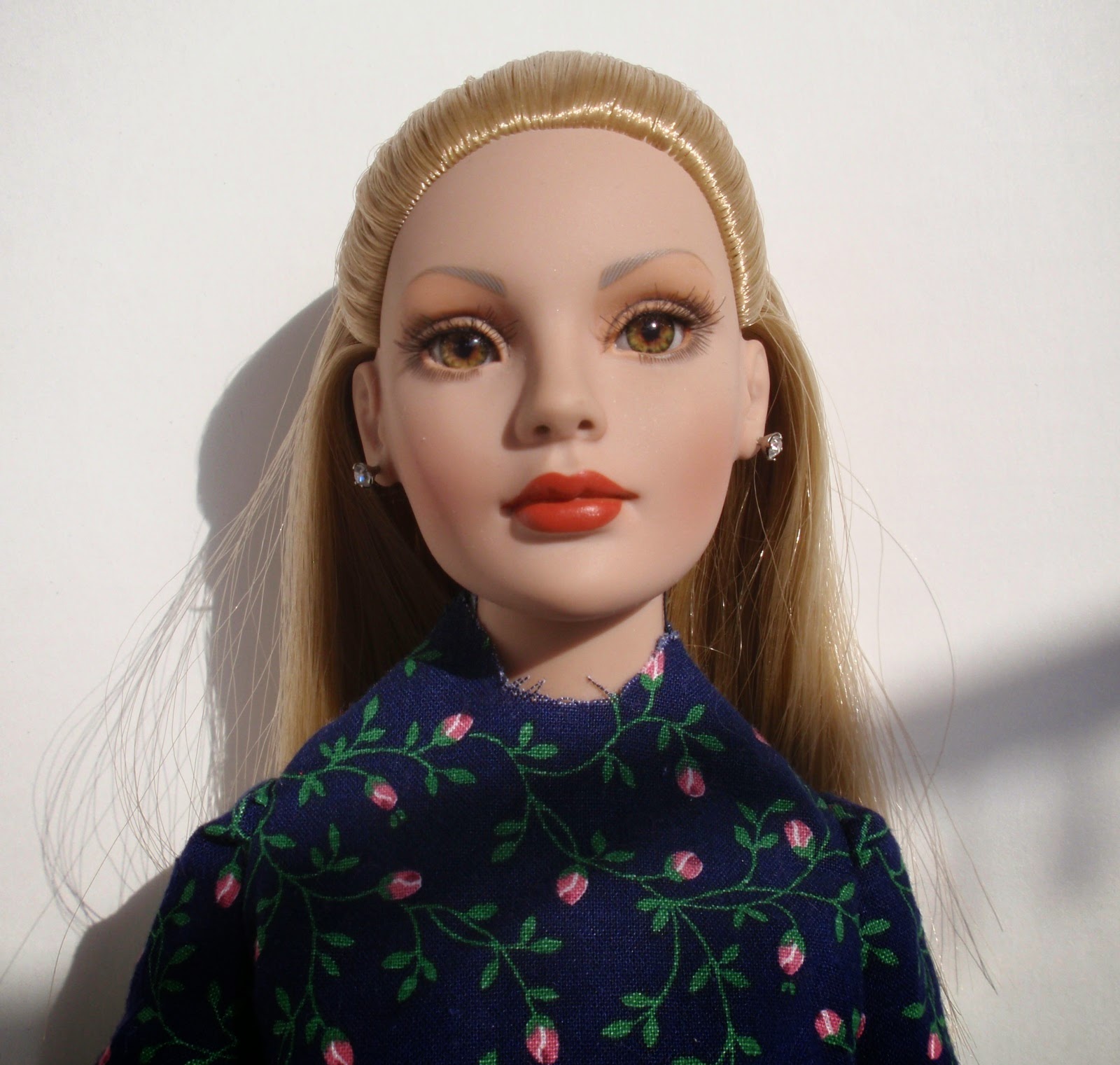 She's been wanting to wear something besides the bathing suit for years, so I bought the Dale Rae pattern, which includes the pieces for the dress she is wearing, and directions on making a stuffed cloth mannequin for more doll fitting, or to display clothes. The dress is extremely basic, and fits her closely, so it can be used to make pattern modifications for different looks.

I really do love these dolls, and I don't have to have a high degree of doll articulation, so in truth I will probably keep these girls for a long time, and add a brunette to the mix at some point. The one issue I have with them is that they all have the same hazel eye color. I find them gorgeous, and fun to display.
Posted by Barb the Evil Genius at 7:10 PM 5 comments: