My Entry in the Latest Requiem Art Sewing Contest

Some of you may know the Requiem Art name. She has an Etsy store that sells sewing patterns for several different sizes of dolls. She also has a blog where she talks about her patterns, and has an ongoing story featuring her Pullip dolls. She has had sewing contests in the past; this is the first one that I've entered. The theme for this contest was "Fancy." Do you think Ashlynn's gown is fancy? 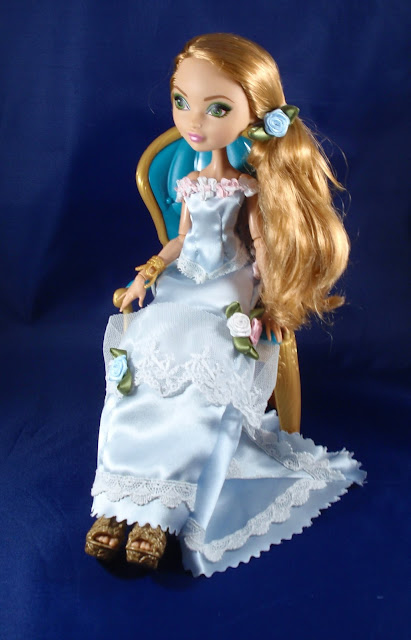 I picked an Ever After High doll because if I win, I get free patterns in EAH size until 2018! And EAH are the dickens to sew for. I've successfully created patterns of my own for Barbie's size, and Tonner Marley, but I'd rather not try to create patterns for EAH. Although, now that I say that, I did come up with the pattern for the skirt above by myself. Fitting around the waist was a pain, though, and I'm still not entirely happy with how the back came out, but it didn't have to be perfect for this photo. :)

Anyway, voting should start soon on requiemart.com, and runs until February 7th. If you like my design, I'd appreciate a vote!
ETA: Vote for me here. I am entry number one in the Petite Slimline category.
Posted by Barb the Evil Genius at 8:14 PM 12 comments:

Ever After High 2-in-1 Castle Playset Review

This was my big Christmas gift from Mr. BTEG and my daughters. And I do mean big! Fortunately for me, I was able to rearrange doll displays and get this castle onto the top of one of my dressers. 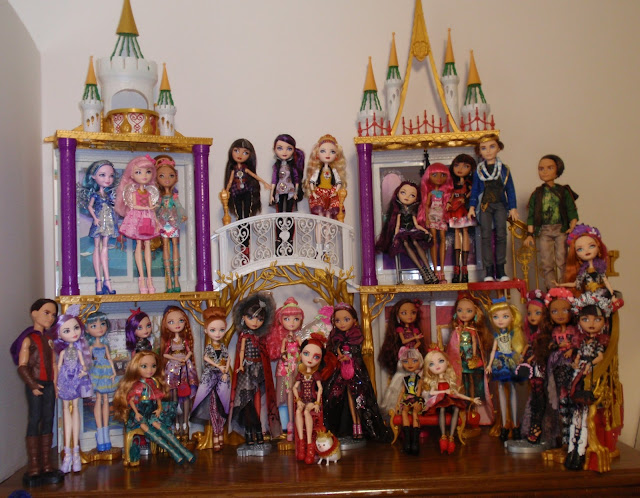 I took a lot of pictures of this, and some of them are not perfect. One of the problems is that I was struggling to find a way to get decent lighting for the pictures. But I'm tired of putting off getting pictures of my great new toy online, so it is what it is. Loads of pictures after the fold!

I ran out to my local TRU a few days ago, to get the EAH Birthday Ball Cupid and Duchess to go with my Birthday Ball Blondie. It became imperative to get them, after I saw that Target is now starting to stock the same version of these dolls, only without wrist articulation. Now that the less articulated dolls are out, I don't feel safe buying the dolls on Amazon anymore, either. So it was off to TRU to get the original versions. I bought the last Duchess at my store, and there were only a few Cupids left. As with Blondie, I'm pleased with the dolls for what they are. They have all the EAH articulation, plus their hair is very soft and not too thin, and their clothes and accessories have some level of detail.

I thought TRU was only going to be going to be carrying the Wellie Wishers dolls, but it seems a good bit of my TRU has changed into an American Girl Place, at least for the modern AG girls! I feel perhaps TRU and Mattel are both feeling a bit of a financial pinch since they seem to be trying to milk the AG brand for all that it's worth. I'll admit that it was neat to see all this stuff in person, and I do like the two American Girl dolls that I have. This set-up at TRU makes me wonder if the historical dolls might be on the way out completely, although I have no concrete reason to believe that. I will admit that the latest historical doll release, Melody, seems to have been hugely popular, and Felicity is also making a return. Still, I've also heard AG is releasing a modern doll for Felicity's line as well. She is the character who will go back to Felicity's time for the "choose your own" adventure style book that other historical girl dolls have. I'm not the target market for these dolls, however, so whatever happens, happens for the American Girl line. 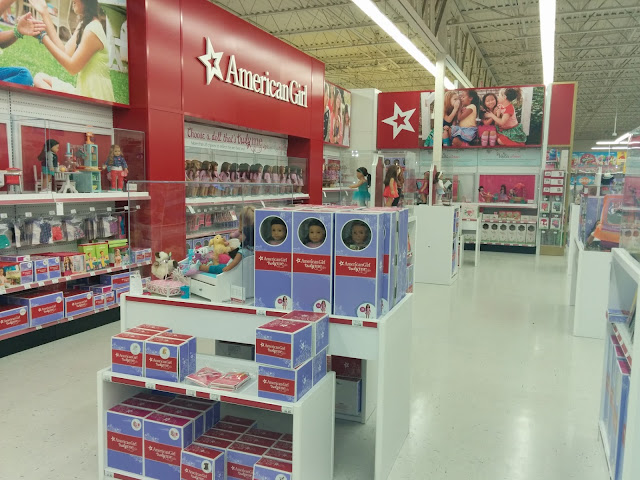 The display case model scheme was also carried into the Barbie aisle, which was just past the aisle that looks like a mini Claire's store. The actual Claire's store that was only a few minutes away from where I live, went out of business a few months back. But that's neither here nor there. Let's look at the Barbie aisle. 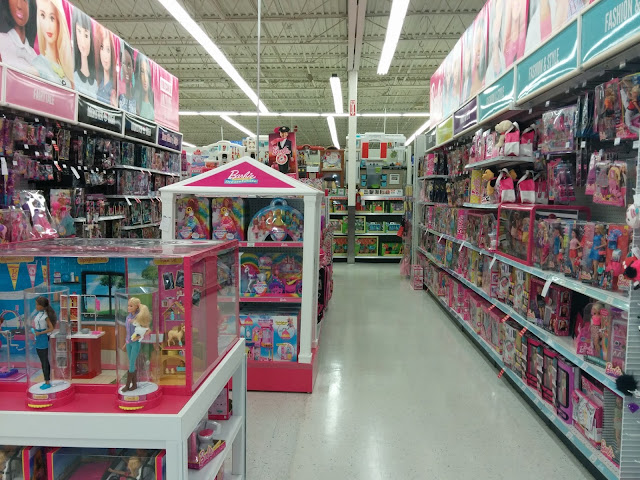 I guess you could also call this aisle the Mattel doll aisle, since as you can see, Monster High and Ever After High dolls are on the back left side of this section. People may not like the changes that are being made to Monster High, but I wish EAH was getting as much attention paid to its line as MH is getting. I can only assume the interest in EAH is just not as strong.

I didn't have time or energy to check out the rest of the doll sections, although I'm wondering now what they look like. I'm sure Hasbro has a pretty decent section with all the Disney dolls, except for Moana, who has her own large area near the front of TRU, since her movie just came out. I'm sure I can find an excuse to go to TRU sometime soon to find out. :)

I looked over my New Year's dollie resolutions from 2016, to see how I did, and what I wanted to change or continue this year. Last year, I managed to post four times a month for the first half of the year. The second half of the year got really crazy, and there is still some chaos and stress at Casa BTEG, so I don't feel too awfully about meeting my posting goal for the whole year. I'm going to shoot for four posts a month again anyway. I like to keep this blog active.

I was planning to photograph my 10" Georgia doll, but she needed a wig, which I never bought. I also have a Patsy that I need to re-wig. I've never bought a doll wig before, and I keep second guessing which wigs would look best. There are also a *lot* of choices out there! I ought to make the wig thing a higher priority this year, so these dolls can be complete.

Of course, I wasn't sure last January that I would be buying much, and then I went crazy about Ever After High, as you'll see when I blog about one of my Christmas presents. It didn't hurt that most of the EAH dolls I bought were marked down, being older releases. I was thinking seriously about getting another Makie, but that didn't happen, after the company suddenly disappeared.
Other than Ever After High dolls, I bought one curvy Barbie, one petite Barbie, two Star Darling dolls, and a discontinued LIV set that I bought mostly for the display window. Unless I fall in love with another doll line this year, my doll purchases will probably be down. However, I've also purchased some furniture, and a LOT of accessories like Re-Ment. That will probably continue in 2017. 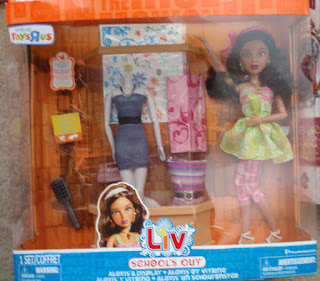 I've found making time to sew doll clothes difficult. This is probably partially because of my depression issues, and partially because of a schedule which changes every day. I keep trying for big blocks of time to get sewing (or knitting) done; what I need is to do a little at time when I have the opportunity. For some reason, I don't feel motivated to go to my sewing table unless I can get a huge amount done at once. That's just holding me back.

I have a couple of construction projects that I want to begin, but we don't have space for me to take on a big project right now. Likewise, I've been trying to paint doll accessories in my sewing area, which involves a lot of moving things around. I'd like to set up a dedicated space for painting (which I will probably share with my husband and daughter, who paint gaming miniatures.) That crafting space won't be free until later in the year.

Lastly, I've been thinking about starting a running storyline here featuring my dolls! I have an idea that I'm trying to develop into a working plot; hopefully I'll get it started within the next month.