The Difference New Clothes Can Make

My Tonner Ultra Basic Daphne doll from 2010 came dressed in a white one-piece swimsuit, as befits a basic doll, right? Only, I've been remiss, for various reasons, in sewing many new clothes for my dolls over the years, so poor Daphne has just been wearing her white suit. I still have plans to sew, but I also happened to buy a Tonner brand doll shirt recently, that to me just makes Daphne shine.

I couldn't find Daphne's original white suit. I've made big strides in cleaning up my doll stuff, but obviously I'm not quite there yet! So here's a picture of Daphne, modeling a necklace that I bought at the Tonner convention. 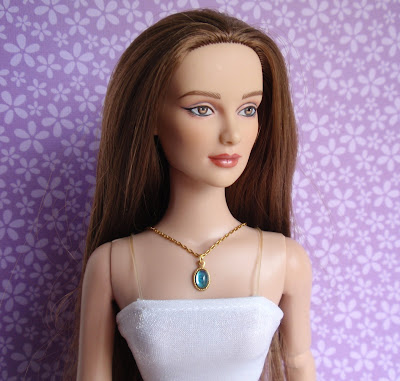 And here's Daphne now, wearing the new shirt that I bought (not at the convention), with a basic black skirt.
It may be more obvious in person (and with better lighting!) but I couldn't help but love how much more Daphne is a standout in her new shirt. 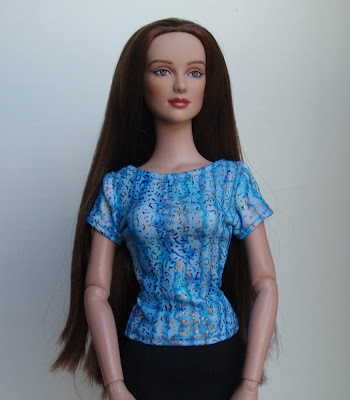 And it's also nice quality, with snaps up the back instead of Velcro. 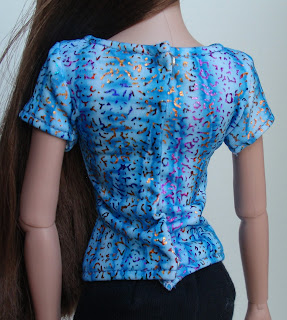 So Daphne's happy, I'm happy, and the other girls want new clothes too! I'm looking forward to making that happen. 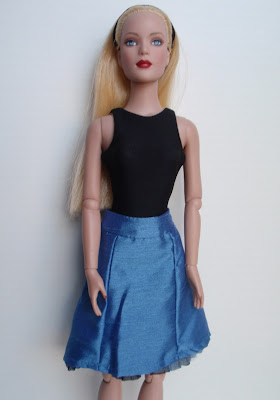 I have my eye on a table top photo studio set on Amazon. It seems to be the best way to get proper lighting for my pictures. Thanks to blogging, I've been taking pictures of my dolls again, and just enjoying my collection more, so I'd like to have proper equipment for the photography now. Something new to try out!
Posted by Barb the Evil Genius at 8:48 PM 10 comments:

In my experience, doll collecting is a lot more fun if you can easily find what you want, whether that is a new outfit, some jewelry, or even a backdrop or prop for display or photography. I wanted to show some pictures of a couple of changes I've made recently in how I store things related to my dolls.

First of all, I found a few double-decker small storage containers at Target. Unfortunately, these were being clearanced out, but there are probably similar storage items out there. I also picked up some more round stackable containers which are generally sold as a way to store beads for crafting. I already had some of those to store small snaps for doll sewing, but I've decided I also like them as a place to store doll jewelry, and some small accessories like sets of doll dishes. In so doing, I managed to cut down space in at least one of my doll drawers. I went from this: 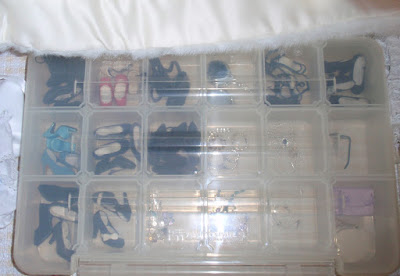 to this: And since my drawer is deep enough to stack the two rectangular boxes on top of each other, it takes up even less space. Coincidentally, most of my 16" size doll shoes fit really well height wise and width wise in this container. In this picture you'll see how a row of shoes fits nicely in the box, with another row of shoes lined up the same way on the other side of the box. The shoes in the top box are loose because most of them are too tall to stand up. 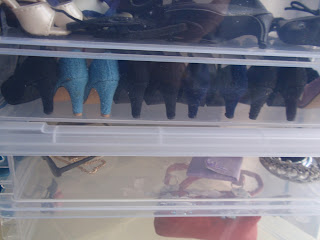 Next, I've never really had a single place to store clothes for my 11 1/2" dolls. They've just been stuck in several plastic storage boxes, since I didn't have anything big enough to hold them all, especially the large, poofy princess dresses. What I ended up getting was an ArtBin Super Satchel. I consider it worth it just because I won't have to buy anything else to store 11 1/2" doll clothes in for a long time. As you can see in my picture, I haven't used very many of the separators available for this box. I might put another separator in on the right side, and put tops and jackets in the new, smaller space, and pants and shorter dresses in the second space. Right now, I also have Stacie size clothes in the top left. In the top right section, for now, are larger shoes, the ones made for My Scene dolls, that I want to keep. I also have my one pair of Liv doll shoes in there as well. I'd like to find a doll who can wear them, and who fits in my collection. 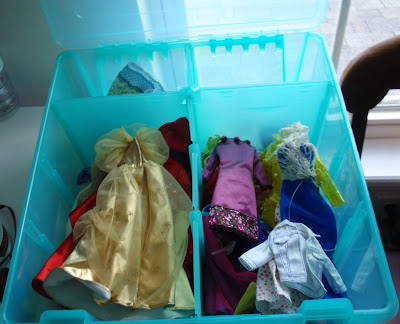 Lastly, like some of you, I've been buying more and more pieces of scrapbook paper, both to use for photo backdrops, and as wall paper and flooring in some of my smaller rooms. 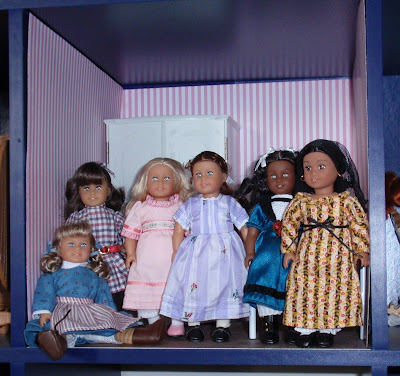 After a couple of pieces of paper got a bit crumpled, I gave in and bought a case specifically for storing scrapbook paper. Sometimes I do hate spending money on storage instead of dolls, or doll furniture or jewelry or clothes, etc.! But protecting and storing what you've got is important as well, so I got a case. 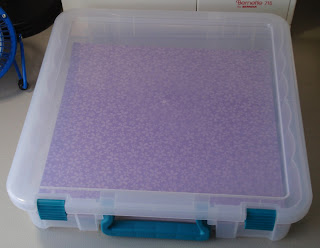 I'd been in a storing-things-the-same-way-forever rut. It was nice to make some changes for the better. And in the end, it works towards the same goal of enjoying what I already have in my doll collection. Do you have any clever ways to store things?

Rebodying Belle, and Ever After High Book Party Ginger Breadhouse

I've started getting into the trend of rebodying dolls with the new Barbie Made to Move bodies. However, the first doll I picked to rebody was an older doll, a Mattel Belle doll from... quite a while back. I have many dolls that would be fun to have out again, if they were a little more posable, including this one. I did have to wash Belle's hair, to clean out the rubber band that had dried out and stuck to her hair. I haven't managed to make her hair behave enough to avoid using a rubber band completely. 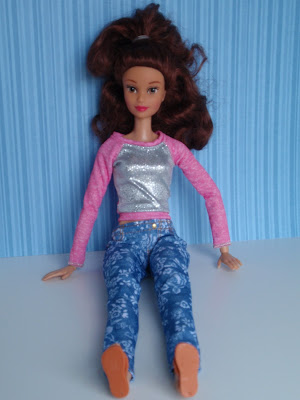 She has the ability to actually carry books now. :) 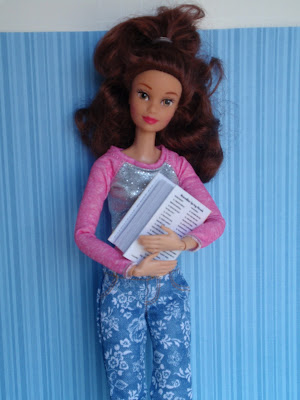 And here she is in her original clothes. The dress is too big in the bust now, but it works. Now she has the ability to offer tea to a visitor to the castle. 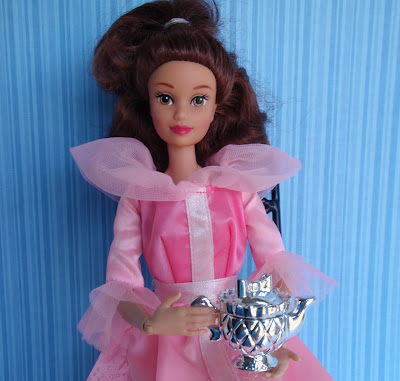 And she can reenact scenes from the movie. 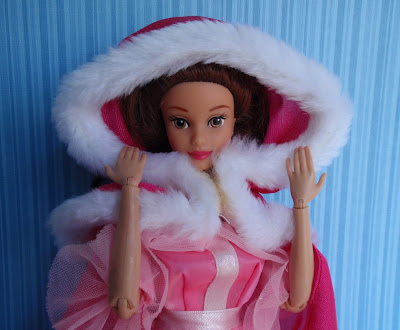 Below the fold, I'm going to put pictures of another older doll of mine who could really use a rebody, and my new Ever After High doll.

OG LORI and Basic Ever After High Dolls at Target

I could write a bunch of explanations, but let's just say that between my daughter's recital, and spending some of the Independence Day holiday out and having fun with real people, there hasn't been a lot of dolly stuff going on. I did buy a few things I will share pictures of later this month; I'm *still* working on making my sewing and doll areas better organized. In the meantime, I saw some pretty nice new outfits on some of the OG LORI dolls at Target.

These three dolls were in the OG mini doll ballet studio. I'm thinking this was not marketing as much as a little girl "playing" with the dolls in the store. 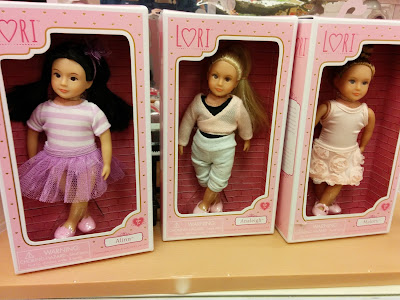 The LORI line seems to be headed toward fall outfits. Is this actual planning, or just what they decided to produce next? 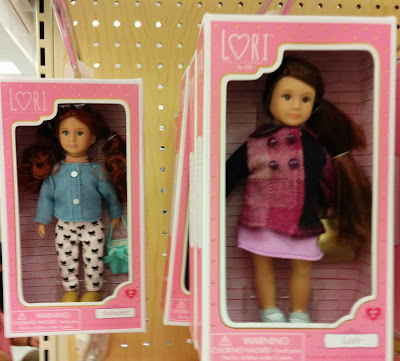 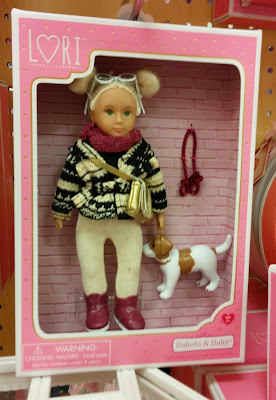 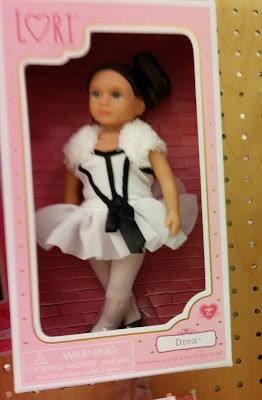 Some of these clothing pieces are cute, but I don't want the dolls. It is a very, very common complaint, though, that there not enough individual outfits produced, instead of dolls with outfits. However, I did end up not very thrilled with the LORI outfit that I bought to review, last year. If I see a 6" doll outfit that I want badly enough, I'll buy the dressed doll, keep the new outfit and donate the doll and the outfit I don't want to the Salvation Army or something.

I do feel like Our Generation missed the boat somewhat with LORI. They released some of the cars, campers, houses and furniture to some stores, right before Christmas, but never completely stocked them, leaving customers really interested in buying and not being able to. Even now, the LORI stuff is still just on an endcap, and there's usually only one camper, patio set, etc. when I look. I also still occasionally see people asking scalper prices for these items on eBay. In my opinion, OG should have introduced a new furniture set or a mini camping accessories set or something to keep people talking about the brand, after the Christmas fiasco. The posts I wrote about the LORI dolls are two of the most heavily visited posts of the ones I've written, so people were interested in this stuff. We'll see in the fall if they bring something new and exciting out for the Christmas season.

Speaking of brands, the Ever After High brand has been going through a lot of changes recently. Most of the EAH stuff that I saw at Target is on clearance. The only new dolls are the basics with the new smiling faces. I don't mind the basic line, as I'm sure it's profitable to have low costs EAH dolls available. As I've already talked about, I also bought two basic ballet dolls to do head swaps for the new faces. I don't mind the new faces either, although to me, they look more like younger siblings to the original dolls, and they may become siblings in my EAH collection. I do still want to see higher-priced doll waves, some with the older faces.

I've read people's opinions that while a smile is perfectly in character for Maddie, who is a Wonderlandian and enjoys craziness, Apple doesn't seem like she smiles much. I must admit I've watched all the EAH webisodes, and Apple does smile a lot, although a lot of times, it's in the prom queen/royal wave kind of way. Here Apple just looks like a little girl who wants to play. Then again, if their target audience for these dolls is three or four years old, that kind of friendly smiling face is probably appealing. 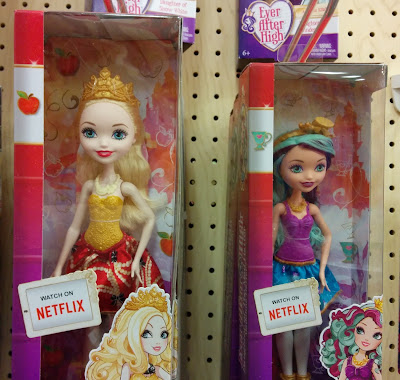 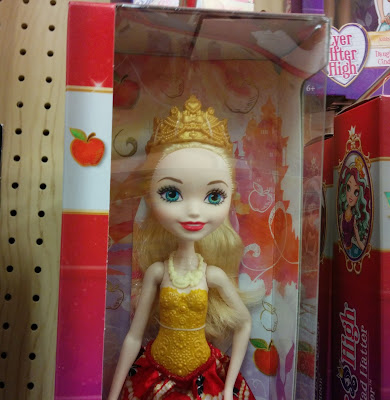 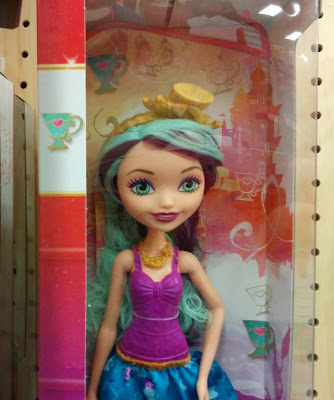 I also found a smiling Raven, although my pic is blurry. Even Raven does smile in the webisodes, though!

Maddie looks like she has molded on white tights. That seems a shame for the little girls who do like to redress these dolls. 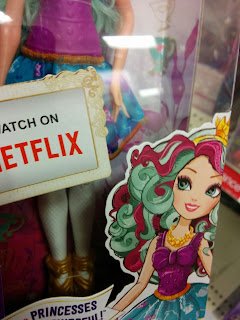 When EAH was first produced, I thought Mattel was going to follow some of the same themes as Monster High. I thought maybe we'd see an Art Class wave, maybe a Magic Spell/"Science" wave. Most of the waves we've gotten recently seem to revolve around the latest Netflix movie release, and I've heard there will be no more Netflix releases after Epic Winter. I have no idea what direction the EAH brand will take, but there are still a *lot* of dolls that could be made. The reroot/repaint artists out there are already making dolls that older fans want to see, so I'm sure at least some of the dolls that people want to see will be produced, in one way or another.

ETA: I forgot I was going to include this picture I took at a Toys 'R Us, of a first and second release signature Darling Charming. As you can see, the newer release (on the left side) is lacking the bracelet and the paint on her neckpiece, that the Darling doll on the right has. Re-releasing signature EAH dolls with fewer details is not winning Mattel any friends, either. 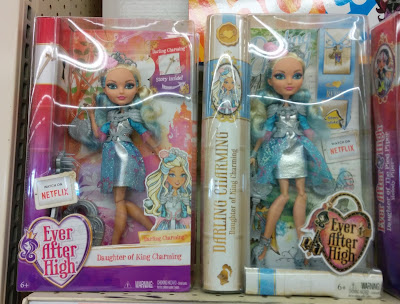