Twenty-Five Years Ago Today (Not Doll-Related) 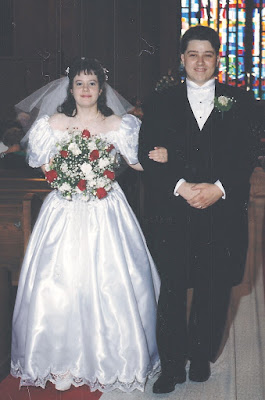 (Although Mr. BTEG did give me the doll that was to start my Barbie collection a short while later.)
Posted by Barb the Evil Genius at 2:32 PM 23 comments:

Let's start with Target, as one of the items there is time-limited. It's this doll-size grill. Tam already posted about it, and when I went to Target a couple of days ago, there were only two left, and one of them had come apart into two pieces and was on two different shelving units. However, when I went back today, there were three gleaming brand-new ones, and one of them was pink, which I hadn't seen before, but apparently Tam had. I imagine these will be in stores until after Independence Day, or close to it. In any case, if you want one and you have a Target near you, head in and grab one. They're in the dollar store section in the front. Tam's looks very realistic now that it's gotten a coat of black spray paint. 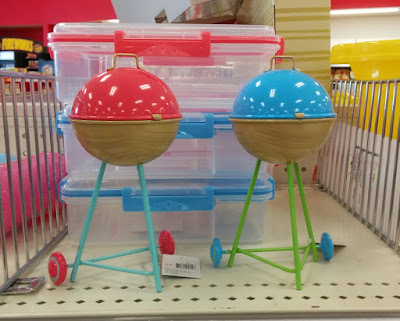 This Our Generation set caught my eye, because in my mind, I associate those build-a-molecule sets with chemistry, and not biology. Then again, the actual title of the set is Life Science.The Dancer and I had a small discussion about life science, biology, and atoms. According to the Dancer, they did learn about cell membranes, which have to do with things like potassium, in biology. I've only ever known students to get those molecule sets in chemistry classes, though. It doesn't matter too much, as the set is still cute (if you can call seeing someone's insides "cute.") I wonder if that set is structured with a real molecule in mind, or if the design is only to have an attractive grouping of "atoms." I flunked my high school chemistry final, so don't look at me! 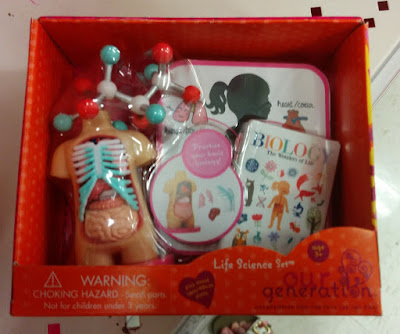 These pet sets also appeared to be new. It's fun to see a variety beyond the usual cat and dog. 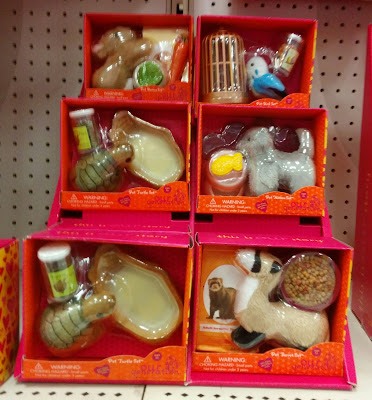 Speaking of dogs, this scooter set is super cute! It's the kind of clever, outside-the-box thinking that I like to see, that takes a doll product a step higher. Granted, it is easier to add something like this to products for the 6" size dolls. The actual product also makes use of "girly colors" beyond pink, even if the boxes themselves are pink. 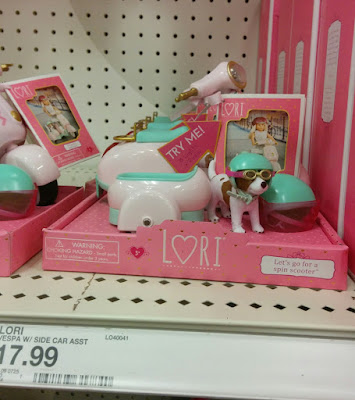 And lastly, I took a picture of this science desk set, only because it is still full-price at Target (as far as I could tell) but also available (and marked down) at my local Tuesday Morning. The art desk set was also at Tuesday Morning. 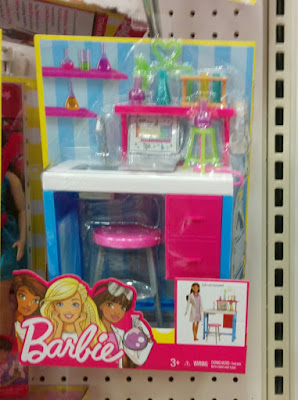 Also, there were a couple of LORI dolls at Tuesday Morning. That surprised me, because I thought Target was the only brick-and-mortar retailer of LORI dolls, and Target generally clearances stuff down until it's gone.

As for what I got, I picked up my second Ever After High Raven and Apple School Spirit set from Tuesday Morning. I got, and reviewed, my first School Spirit two-pack for Mother's Day of 2016. The last time I went to Tuesday Morning, there were two of the packs on the shelf. I had enough self-control to only take one of them home the last time I was there, but for $14.99, I had to grab the other one when I found it still there two days ago. The dolls can always be re-rooted, re-painted, and re-dressed. $7.50 each for a full-dressed and articulated Ever After High doll is nothing to be sneezed since they're pretty much not around anymore. There was also a Budget Apple with straight arms and legs still on the shelf. Hopefully some little girl will find her and be happy with her.

I also picked up the Barbie violinist pack for $2.99, solely for the violin, even if it does say "Barbie" on it. 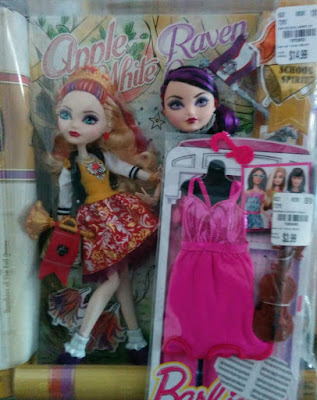 I passed on an Ever After High Castle Set, marked down to $30.00. You'd better believe I'll be looking to see if it's been marked down some more, though, the next time I go in.

Tuesday Morning has many kinds of products for sale, and I love to cruise some of the other aisles, looking to see if there are any other bargains that I can pick up. I got a cardboard scratcher for cats, and a small make-up type bag for the Dancer, since she's traveling a couple of times this summer. I also found a few great things for dolls, in the craft aisle: three of these three-bag sets of sticky-back white tiles. Each set of three bags was only $1.99! I also picked up one set of pink, as that was all they had of that. Not enough to tile a 1/6 size floor, which would have been fun, but they can be used for mirrors, tabletops, and kitchen/bathroom counters. 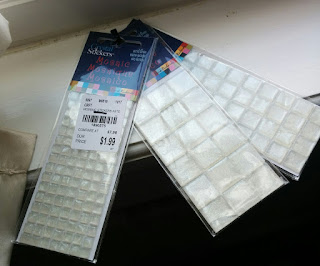 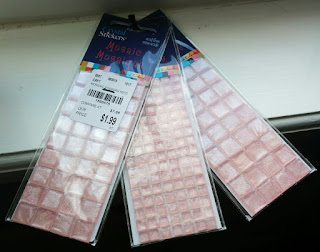 Anyone else pick up a good find lately?
Posted by Barb the Evil Genius at 5:38 PM 10 comments: