I was in Walmart yesterday and checked out the Barbie aisle, like you do. I found a fashion pack I'd been interested in and decided I didn't want it, when I glanced further down the aisle and saw a large pack in the Sweet Orchard Farm section. Mattel has had some farm dolls and play sets for a while, but they currently produce a whole line of dolls, playsets and vehicles called Sweet Orchard Farm. I couldn't find this pack online on either Amazon or Walmart.com after I got home, but there the pack was in the store, brightly colored and appealing. When I noticed that the two dresses both appeared to also be printed on the back, I leaped over and grabbed a box. They *were* printed on the back, and there was also a t-shirt, a skirt, shorts, a vest, a hat, a purse, and a pair of short boots. The whole set looked decent, for $9.97, so into the cart it went. I'm going to share all the pictures from my photo shoot, and then talk about the pros and cons, at the end. 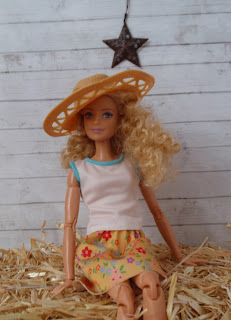 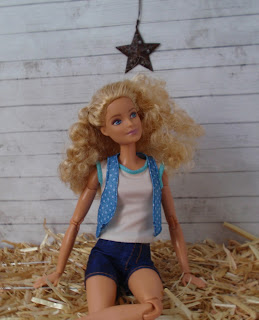 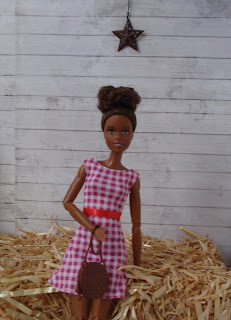 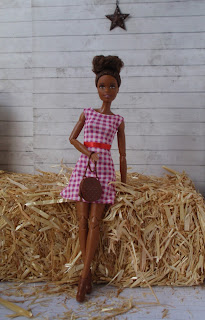 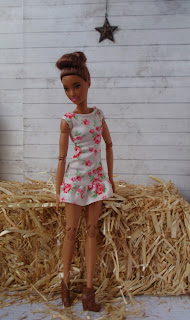 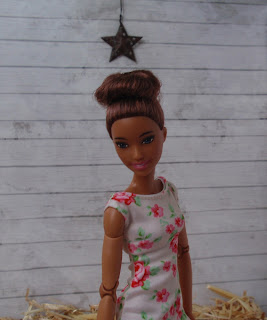 Pros:
-The only piece that isn't finished in some way is the flowered skirt, and only the hem is unfinished. Since the skirt is made of knit fabric, it shouldn't unravel.
-The pieces are very wearable, for everyday. Although that rose dress *is* a little short. Even the vest, though, looks better on than I thought it would.
-Most of the items were not held on by tags in the package! Maybe Mattel has heard all the complaints about tags tearing holes in clothing? Most of the clothes were merely slipped over cardboard tabs in the box, but they all looked fine in package. The vest was held in by tags, but the fabric is woven, and a little thick, so there was not as much chance of it developing a hole. The hat and purse were also held down by tags, but the tags on the purse went through the "loops" holding the strap to the purse. Once you pulled the tags free, you could slide the tags out because the tags had small ends on the back side of the cardboard.
-The dresses are printed on both sides!! The ribbon belt does not go all the way around the back of the checked dress, but that's not as big of an issue, and happens on real clothes sometimes.

Cons:
- Except for the shorts, all the clothing pieces have no back openings. You have to sliiiiide the dresses and t-shirt on, and those clothes are tight! There is not a lot of give, even though the pieces are knit. I wonder how they fit on a non-MtM Barbie? The Sweet Orchard Farm dolls all have straight arms and legs.
- The hem isn't finished on the flowered skirt. I think the skirt looks not quite right, because of that. It looks unfinished, because of course it is.

If you find this pack at your local Walmart, or another store that happens to carry it, I'd definitely pick it up. The shirt, shorts and vest will all work with other things, and the boots and purse are cute. I definitely want to perk them up with some paint details. The dresses would be nice with jackets and pumps, to make different looks. Even the hat can be worn with other styles. I would have liked to see back openings, but then again, maybe the backs wouldn't match the fronts of the dresses then. The rose dress does not have a front or a back; it's two identical pieces sewn together. Plus, the pack wouldn't have been $9.97 if more of the pieces had closures. I do wonder what it would cost though; I wonder if I would think the price was worth it.

While I was pulling the hay bale from the back of my storage shelf, I saw the set of three rustic metal stars that I picked up at a craft store, and I used one in my photo shoot. I thought it looked nice hanging on the "barn" wall. Here's my secret: those three stars shed rusty pieces like crazy. Here's residual bits in the plastic bag that I store the stars in. 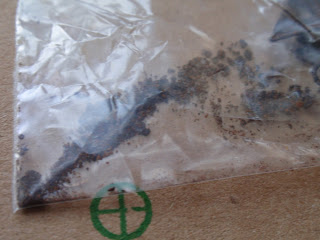 And the pack that I didn't buy? It's this one: 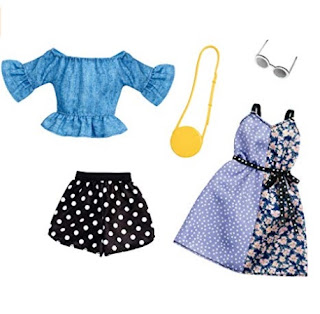 The flowered print on the right side of the dress looked very dull in the store. The elastic around the neck of the denim shirt was already folded over a bit, and I was afraid that the neckline would fold worse on a doll body. Plus, I had forgotten that the black polkadot piece was shorts and not a skirt. The fact that the purse doesn't look well with either of the outfits is just a plus. Or, a minus.

Autumn is coming soon here, which means farm visits, for pumpkins and apple cider and corn mazes and hay rides! Do you like visiting farms? Do you live on a farm? (I think I know at least one reader does.)
Posted by Barb the Evil Genius at 7:35 PM 8 comments: