Today's J-Doll is a concoction of pink fluff, wearing an outfit that would make Barbie jealous. It's no surprise that she's going to the mall! Stephen Avenue Walk is a pedestrian mall in Calgary, Canada. Basically, it's a street lined with stores and restaurants, that is closed to vehicles during shopping hours. Our girl is a real mall doll! 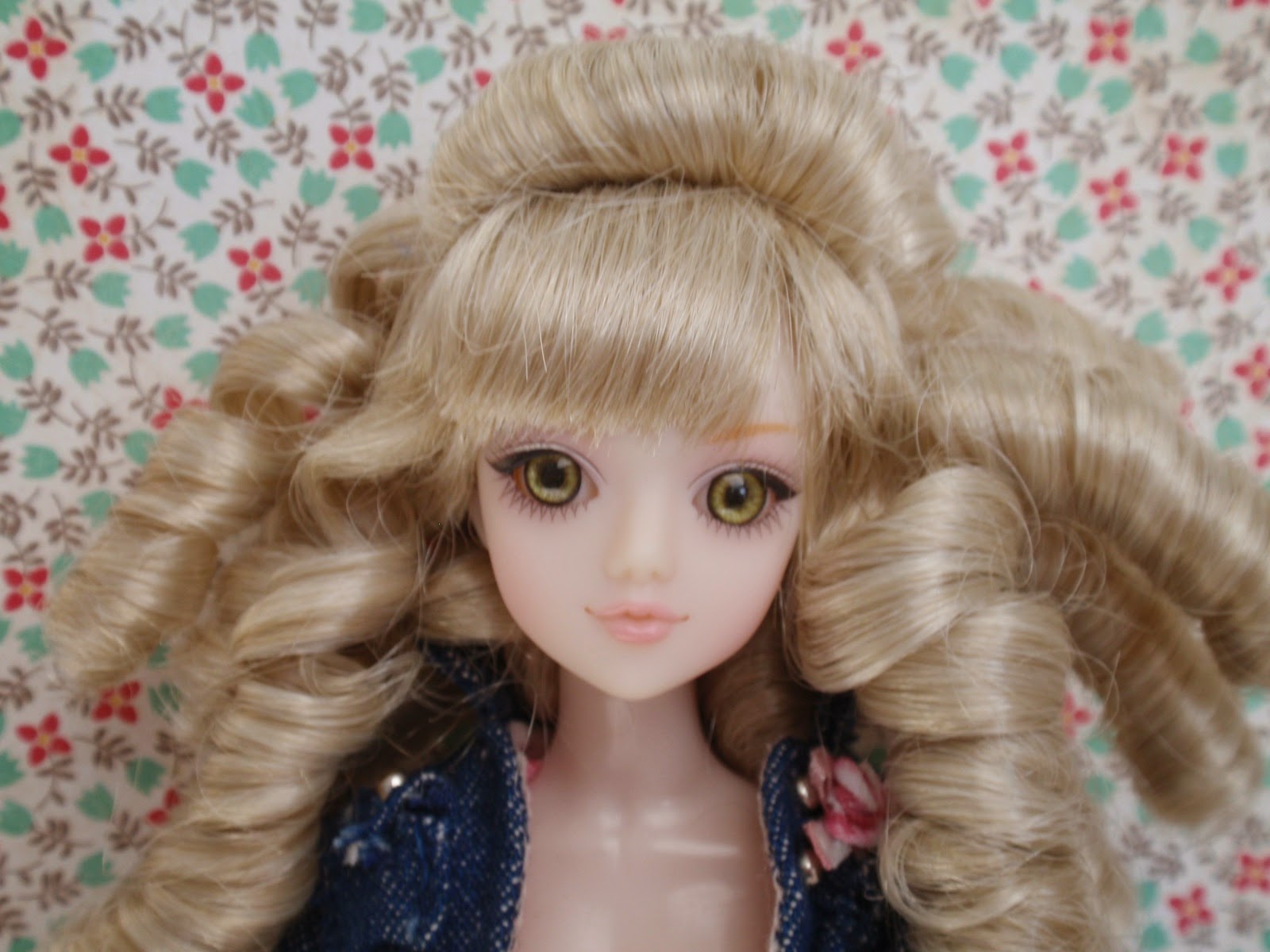 She has blond hair, with a roll on the top of her head, and a profusion of ringlet curls. Her eyes are yellow-ish, and her lower eyelashes are different from any other J-Doll that I own. They look like V's, instead of the individual lower lashes my other dolls have.

Let's start with her basic clothes. She wears a sleeveless yellow dress, with pink flowers on the fabric and pink ruffles and ribbons as decorations, as well as a tulle-type overlay on the skirt ruffles. The shoulder straps on her dress keep wanting to slide down. She also has lace stockings with ruffles at the tops. 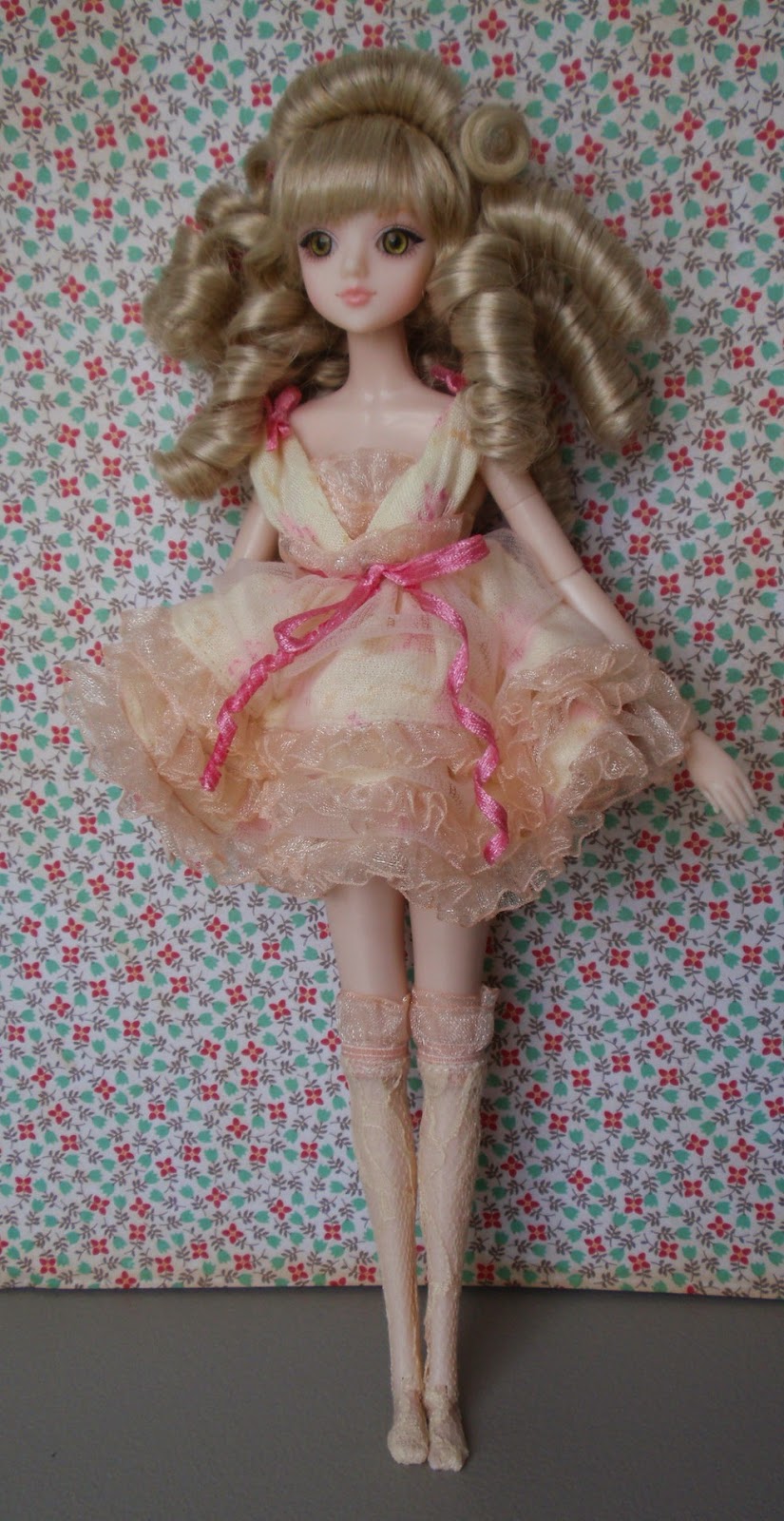 She has a pink purse that feels like leather but probably isn't. It has a ribbon strap threaded through a gold chain, and is decorated with a pink cameo and yet more pink ruffles. One of the ruffles on my doll's purse folds the wrong way, in towards the cameo, instead of out. The purse does open, slightly. You could maybe stick a little tube of lip gloss in for her. 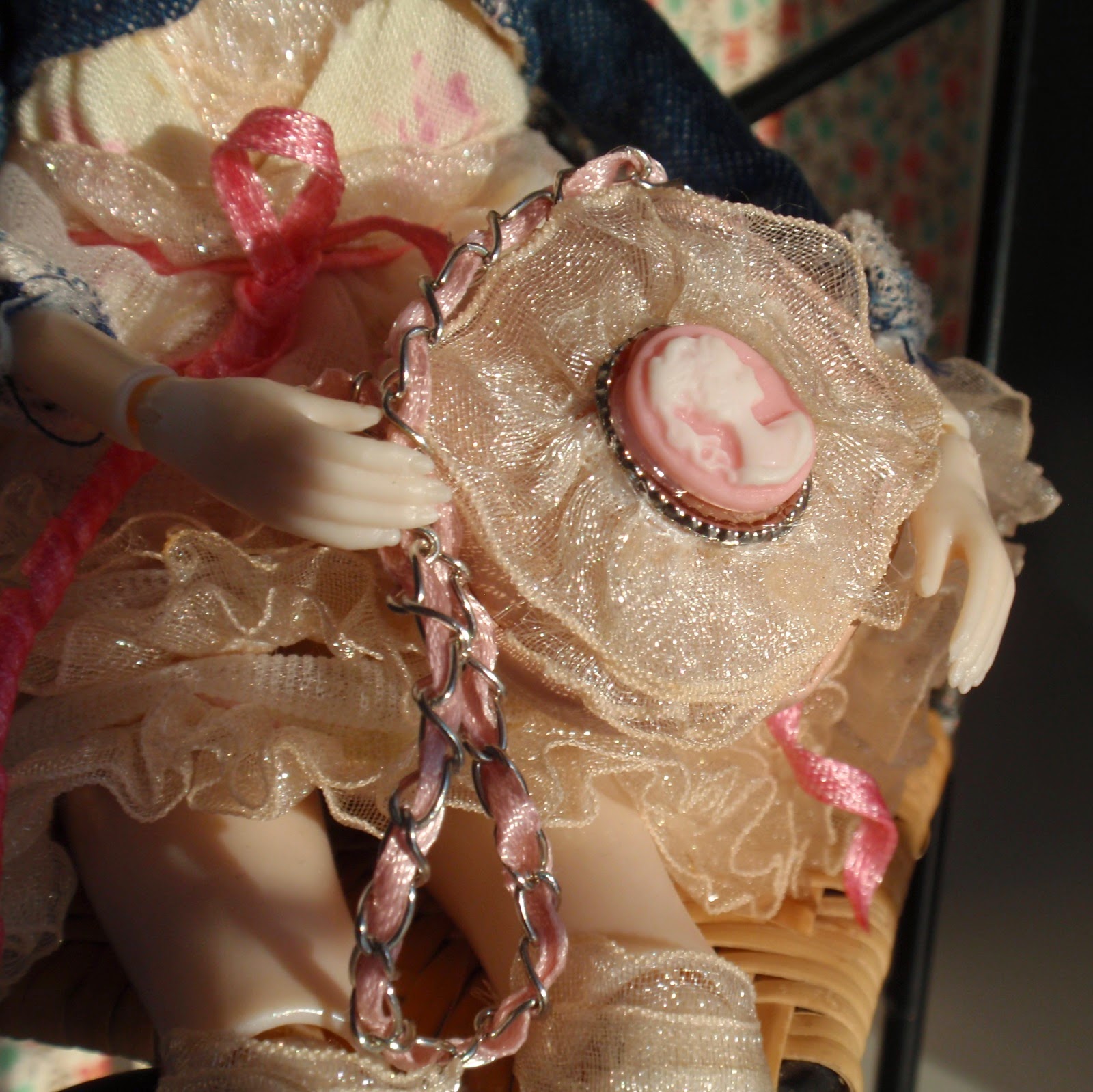 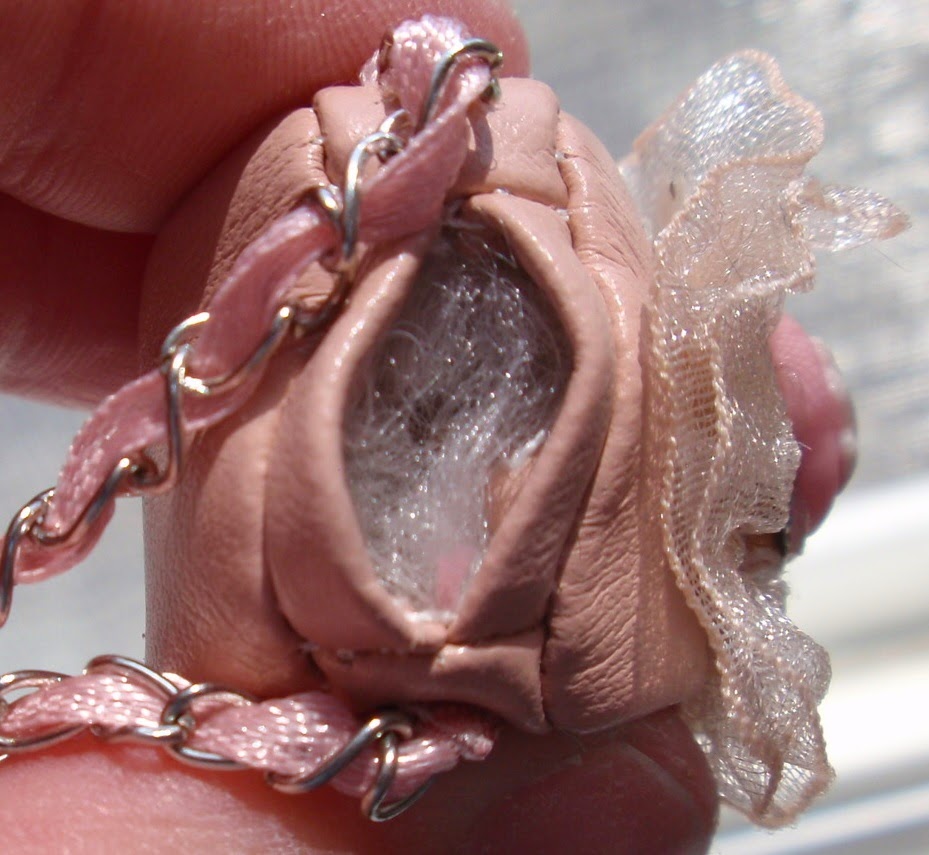 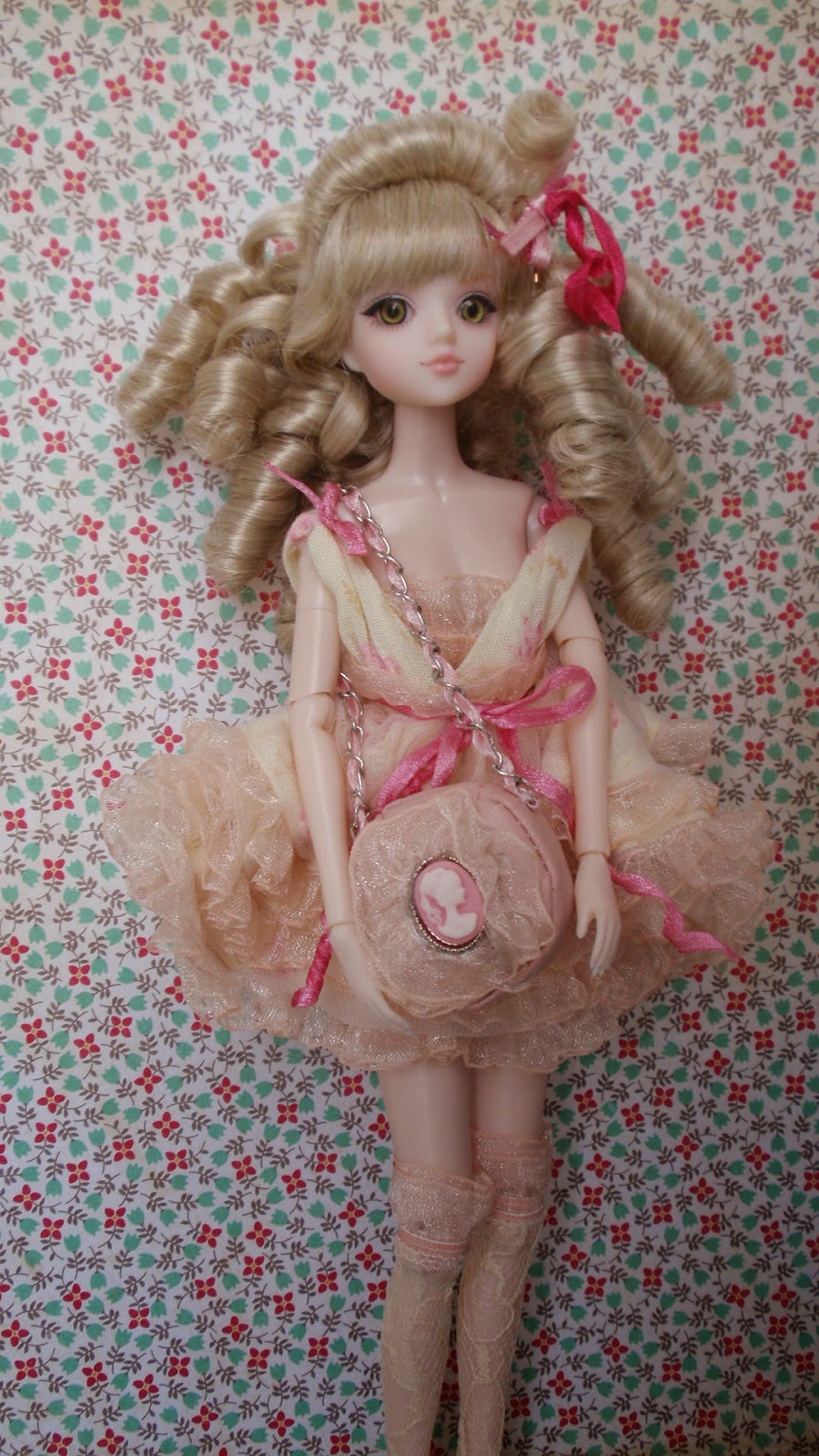 As you can see, she has pink ribbons in her hair. This cluster of ribbons is attached to a small piece of curved metal. It's harder to put in and take out than you might think, since I don't want to loosen that big curl on the top of her head. There's also not enough hair in the curl to really hold the metal without it slipping down some. But it is workable with care, and it adds to her outfit. Since I've taken these pictures, I've lost the bit of metal. It's probably lying somewhere by my other J-Dolls and their loose clothes; I need to straighten things up. Dolls never clean up after themselves. 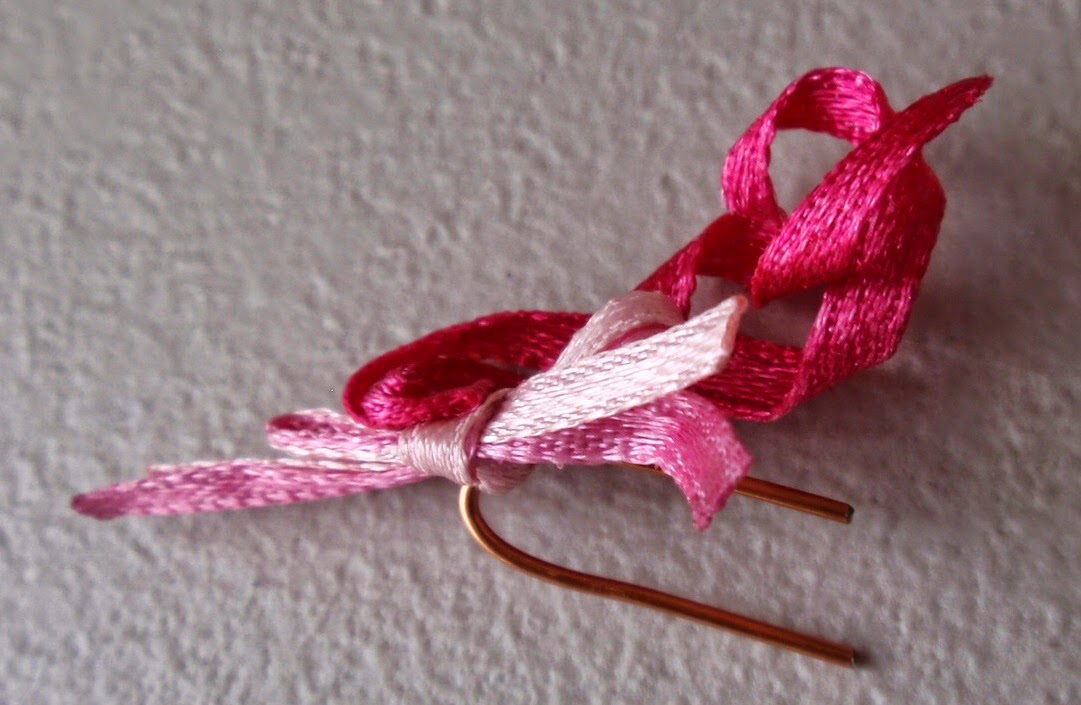 As usual, the J-Doll shoes are so-so. They're a sort of hard rubber, so at least you don't have breakage issues. However, they don't fit the doll as well as I think they could have. I also wonder how far she's going to make it walking at the mall in these shoes. They are colored turquoise on the bottom, which I don't quite get. The color is no where else in this doll's outfit. Still, the extra touch of the pink rosettes and ribbon is something. 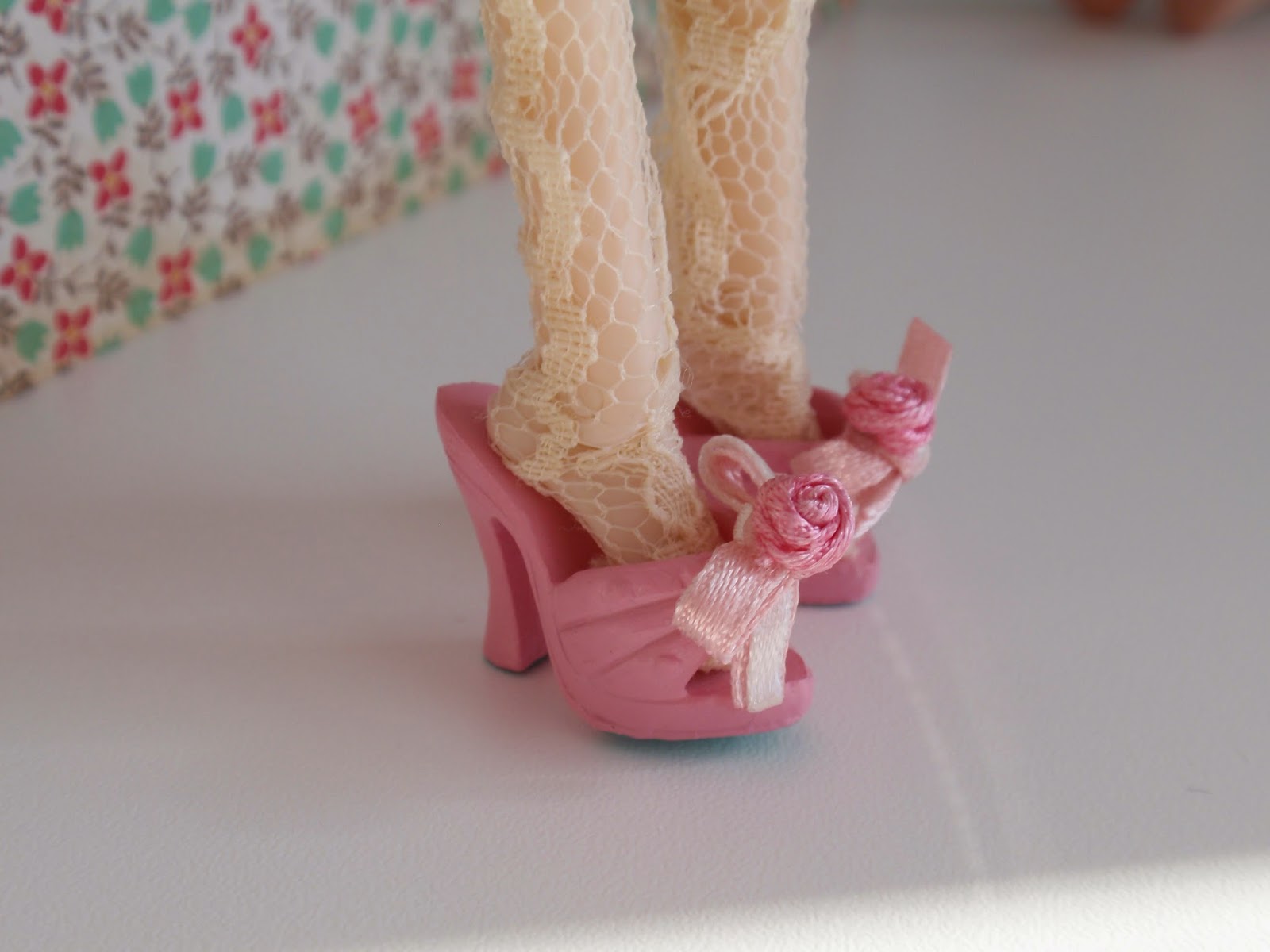 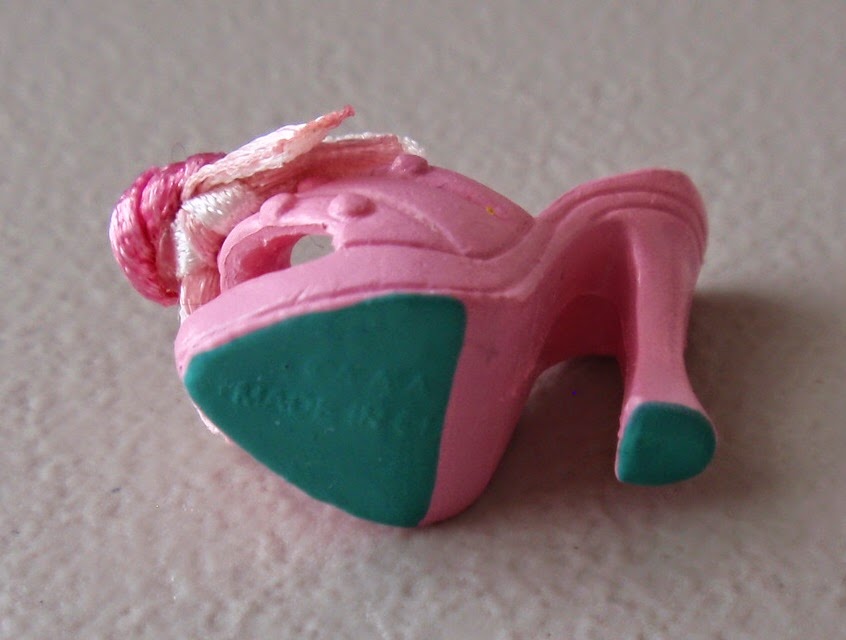 Lastly, she comes with a faux denim jacket, with two pink-and-white rosettes and yet more pink ribbon. To me, the rosettes kind of look like big lollipops, which just adds to the over-the-top sugar sweetness of this doll. I say faux denim because the jacket fabric just seems like a plain navy and white woven, and the scale is slightly too big. The bodice of the jacket in lined in pink lace, and the cuffs also have the same lace. Unfortunately, the lace is too big proportionally as well, so the cuffs really don't look right. And again as usual with J-Dolls, the sleeves on the jacket are really hard to get over her hands. 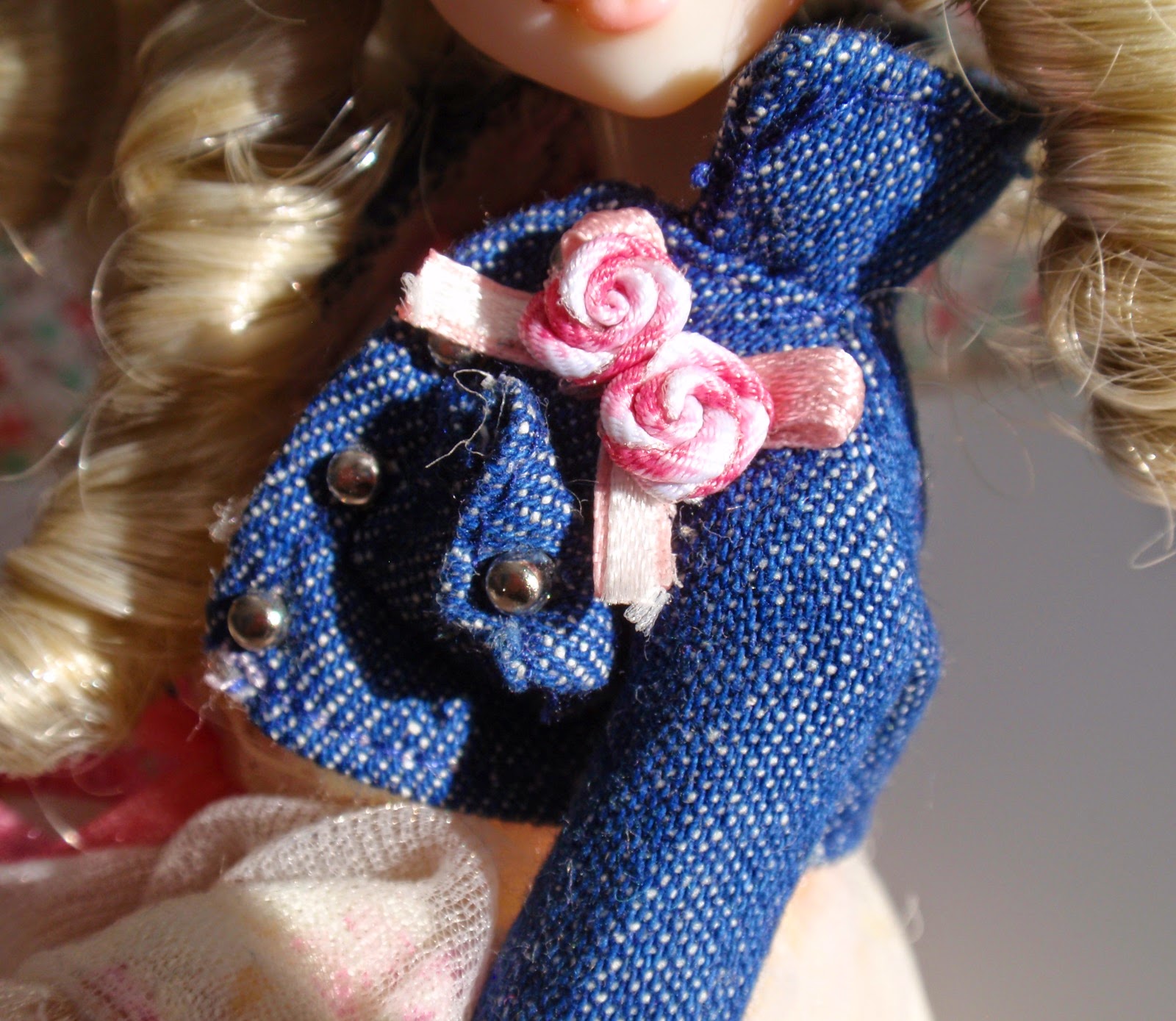 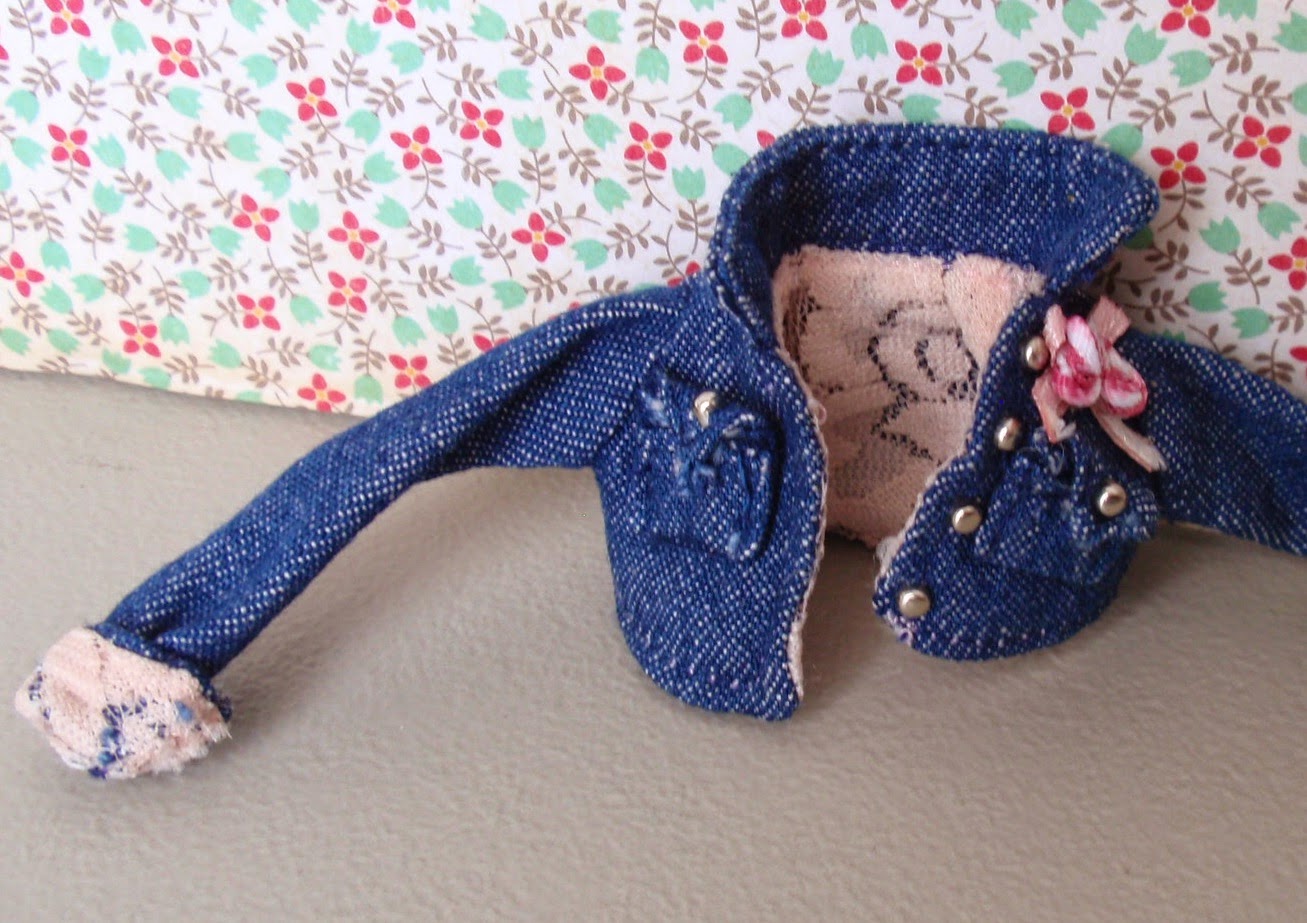 I like this doll. Her flaws are not surprising, except for the "bent" ruffle on her purse. I'm wondering if I can make that lie flat. Otherwise, there are certainly a lot of details in this, and as long as you don't mind the alliterative ribbons, ruffles and rosettes, it's a cute outfit, and a cute doll. 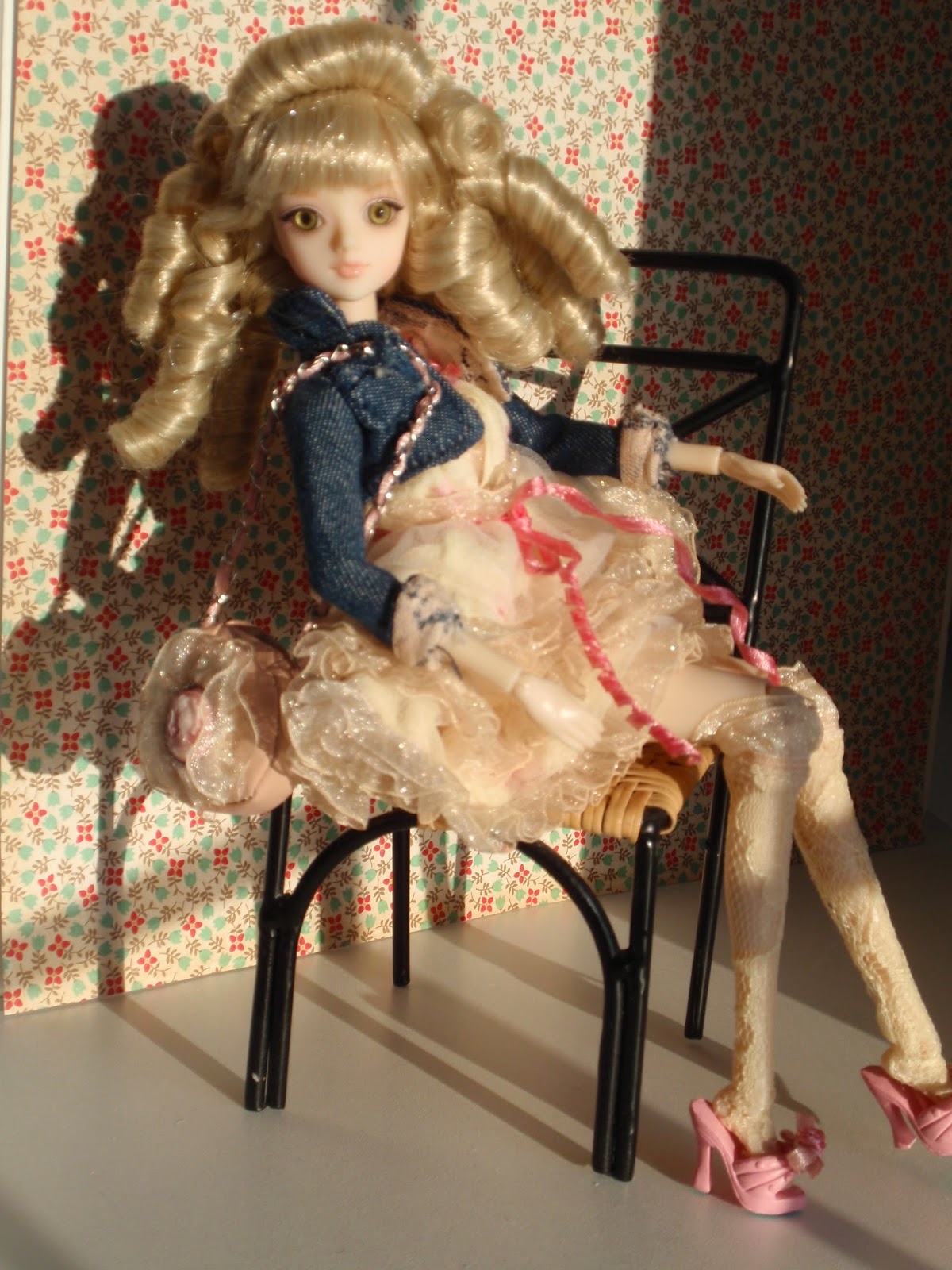 Sunday evening Mr. BTEG and I had to take a run to Target, despite the bad weather. On the way there, we got the expected robocall from my daughter's school, saying that they were closed on Monday. Woo hoo! Since I was going to have a cozy snow day at home, I felt like it would be nice to have a couple of new dollies to play with.

I've been looking at the Mini Mooshka dolls for a while. I'm not into the bigger cloth dolls, but the minis look like homemade wooden toys. Between their appearance and the Russian-sounding names, they remind me of matryoshka dolls. They're made by MGA Entertainment, which also makes Lalaloopsy, among other dolls, and seems to own Little Tykes as well. 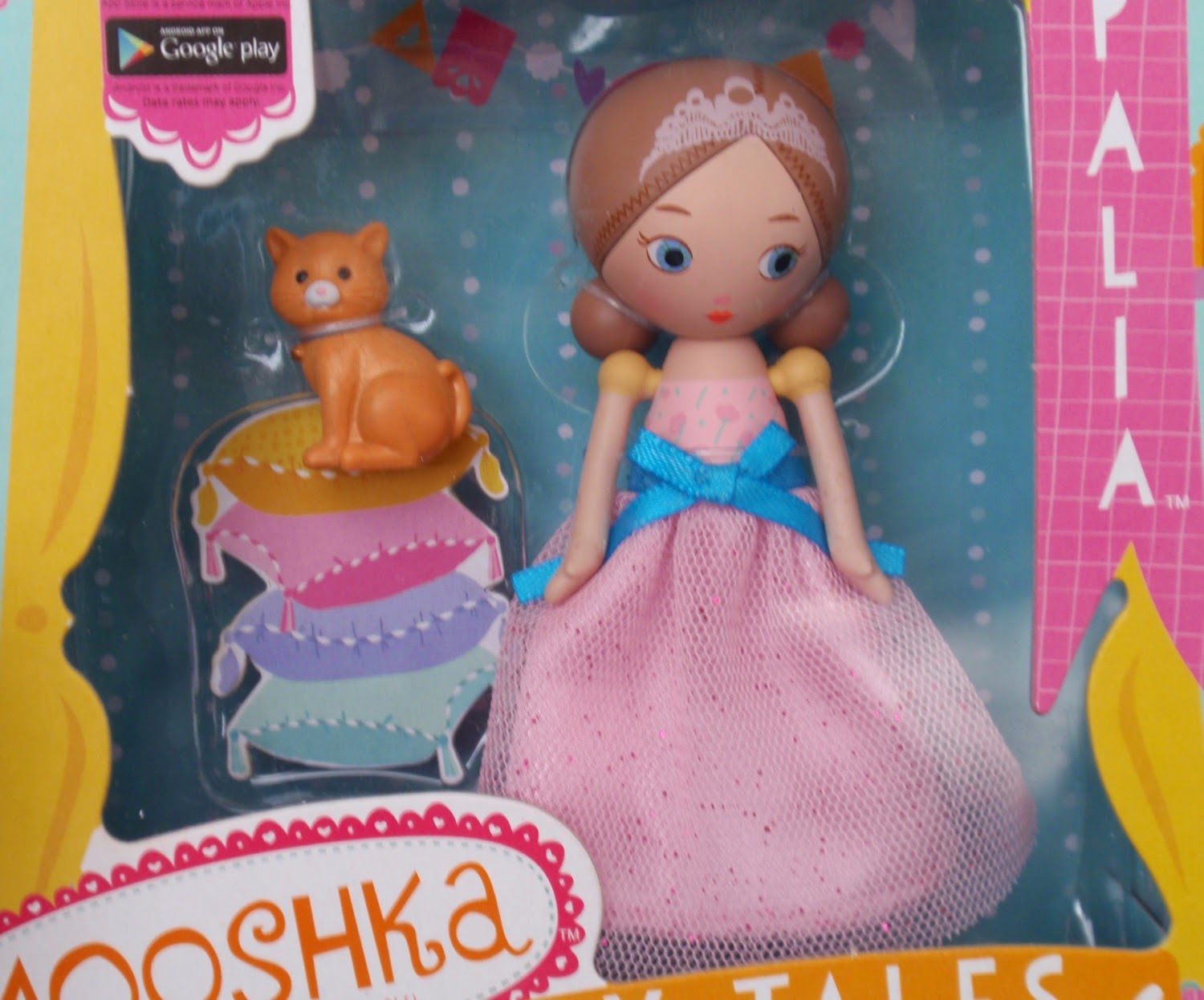 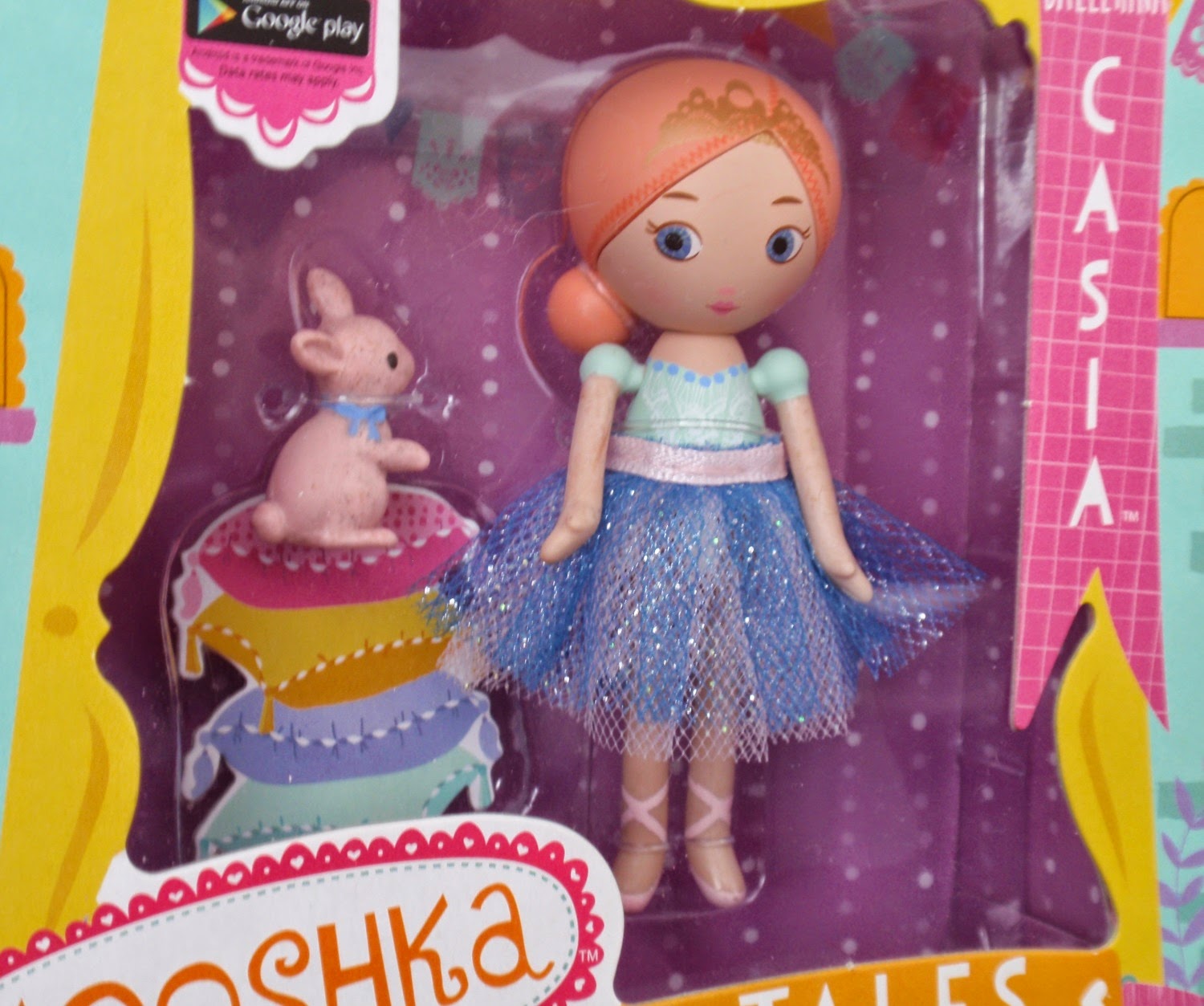