Yep, it's early in the year to have a vacation, but Mr. BTEG's employer paid for him to attend CodeMash again this year. CodeMash gives a yearly tech conference, based out of the Kalahari indoor waterpark in Sandusky, Ohio. There are a handful of hotels that offer overflow rooms, and one of those is Great Wolf Lodge, also an indoor waterpark, and just down the street. Mr. BTEG has attended CodeMash before; you can read a review about the waterpark and general facilities here. You can see a doll-sized 3D printed tea set that I had printed at CodeMash here.

We as a family have very fond memories of Great Wolf Lodge. The first time we attended was in 2004, and we've been back several times since. Since Mr. BTEG knows how much I love GWL, he booked his room there this year, and I hung out and used the waterpark, while he was attending classes and functions at Kalahari. So I had a lovely vacation from Monday night to Friday morning.

Great Wolf Lodge is really targeted more for younger kids. There are no large water slides or more adult-friendly only water activities at GWL. There are several storytimes, including one at night when kids get to come down in their pajamas. There is a "dance party" where they play kid-friendly dance music, and the kids bop around in their jammies.

There is an "interactive, live-action, roleplaying game" called MagiQuest, that is really slanted towards tweens and younger, although I have seen some enthusiastic roleplaying adults running around the hotel. There are various treasure chests, and interactive screens and so on, situated throughout the hotel lobby area's four floors, and there is a scenario that you go through, after you buy a "magic" wand to activate the items. There are also accessories like capes and swords available for purchase. My niece had a great time playing this back in September. She was ten. 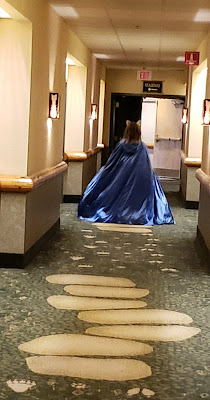 There's also a small craft area, where coloring pages and other simple activities are offered throughout the day. It was fun to see that the chairs are the same as the one as I have in the doll-sized Ikea furniture set that I bought. For some reason, I forget to get a picture of the doll-sized chair back then, so here it is, and then the (small) human sized chairs. 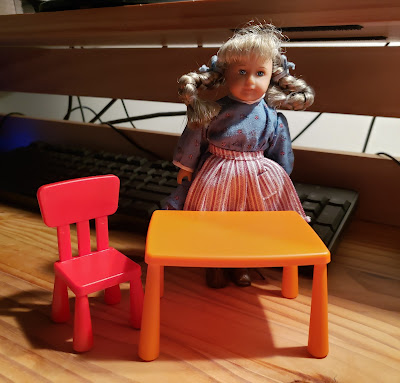 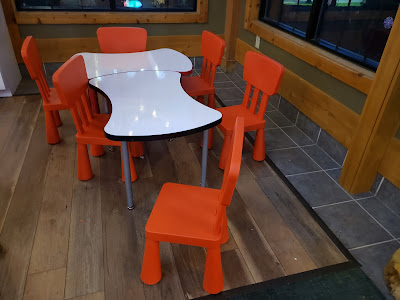 Here's a picture of the waterpark, and of the giant water bucket that fills up and tips every so often. 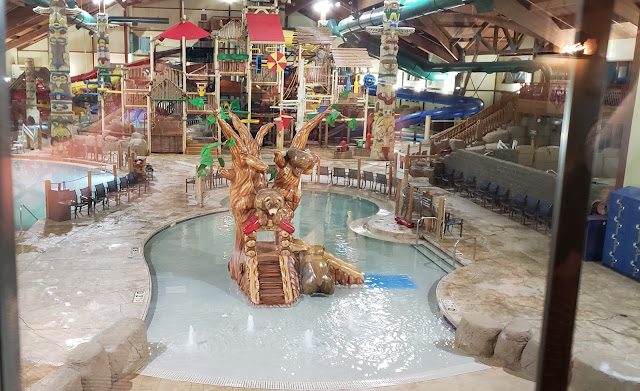 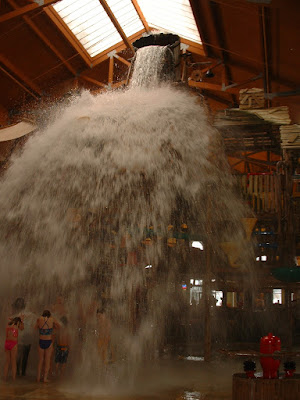 There is a doll (figure) involved here! The gift shop at Great Wolf Lodge offers some of the World's Smallest brand items. This trip, I picked up a Totally Hair Barbie mini. Despite the name, this Barbie is definitely not the world's smallest Barbie doll. The mini original Barbie, that I got with the 40th Anniversary Barbie doll, is much smaller. The stand is a nice touch with Totally Hair, though. 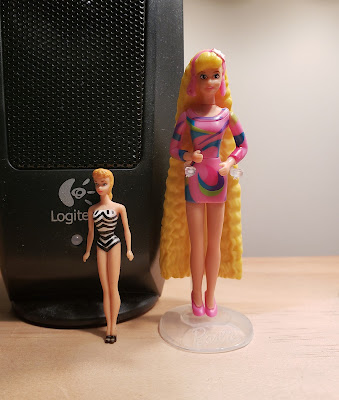 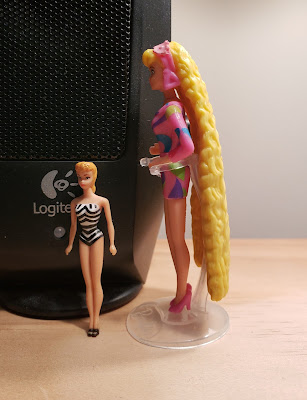 There was also another figure involved in the trip, a 3D printed one. Thursday night, CodeMash paid Kalahari to keep some of their water attractions open late, and there was food and free beverages, as well as alcohol to buy. There were also a bunch of board games available in one of the conference rooms. Some of the CodeMash coordinators hid mini, 3D printed Baby Yoda figures around the conference area, and if you found one and turned it in, you got entered into a drawing to win a larger Baby Yoda, about a foot and a half high, or 31.75cm.  Mr. BTEG found one, but he didn't win the big Baby Yoda. 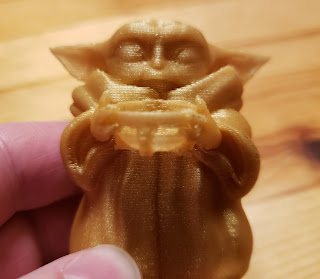 He did win an Artistic Achievement award in the Badge My InternetofThings Life competition. Badges were given out (run by an ESP32, if you're a geek) and people customized them. Mr. BTEG designed the 3D printed case, but he also created a program on the screen that Rickrolled other convention goers. 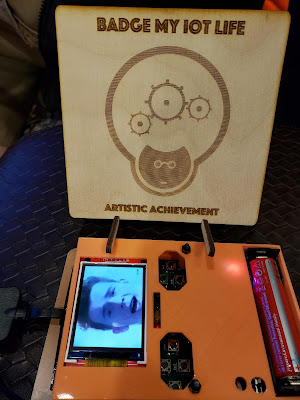 Lastly, I wanted to share this picture with my Australian readers, especially. It's a ride at Kalahari, that gives you the chance to surf, if you can get up on the board. Most of the people that tried it couldn't stand up. A few did a 360 in the wave; most just held on. It's the closest thing that we have to surfing here in Ohio, although I did have a Surf Ohio shirt when I was in my twenties. :)

I hope you don't mind this mostly off topic post! It's what has taken up most of my time so far this year!