Ever After High Back to School Madeline Hatter and Holly O'Hair

If you read the news and gossip about Ever After High dolls, you've known since March that these dolls were coming out. Well, actually, by this point, you were probably not sure you would see them at all. The Apple White set with the desk and accessories became available, but where were the rest of the dolls? Then in September, you started seeing pictures of the rest of the Back to School dolls, but at that time they were only available at the Mattel store in California. And then finally, last week, the dolls became available for sale on Amazon. It. Is. About. Time. We'll talk a bit more about all that later. For now, let's look at the dolls. 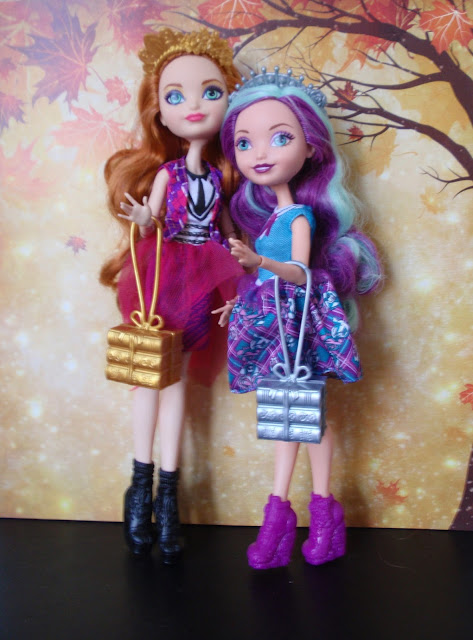 As all current releases do, these dolls have the new smaller heads and smiling faces. These two, Meeshell, and Apple have all of the regular EAH articulation. There is also a budget Blondie, Darling and Cupid from this line, who only have bending elbows. Those dolls also have different clothes and accessories from the others. As far as accessories, I think all of the hand-held items are repeats from previous doll releases. My dolls' purses are recolored versions of Ginger Breadhouse's stack of books from her Book Party release. The laptops are from Apple White's Fainting Couch. I think the laptops are nice, even as a re-release. If you didn't get/don't want Apple's couch, you can acquire multiple laptops here for your girls to get on the MirrorNet. 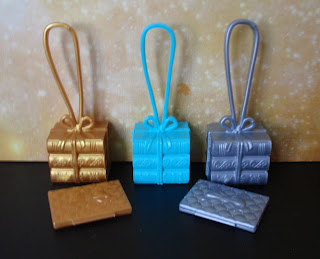 Holly's headband fits in very well with previous accessories she's had. The flowers and braided effect on this piece is almost a perfect match for her Spring Unsprung belt, for example. 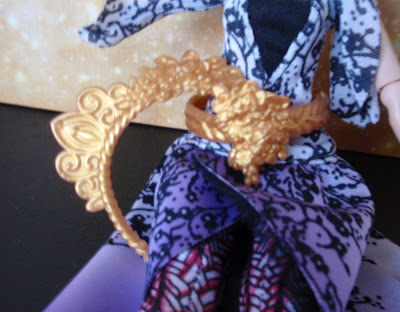 The shoes don't go with any older accessories as perfectly, but they have a kind of theme of flowers climbing up a tower. They are also completely original, I think. I don't recall any doll having shoes like this before. 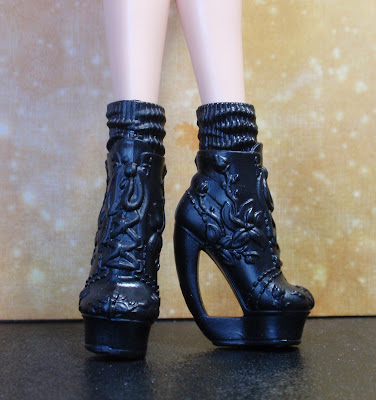 This version of Holly's face is a little bit off. I think the eyes look a bit too big and intense, and I don't think the color of her lips suits the rest of her coloring, even if it matches her very bright dress. I've lined up original Holly, ballet Holly with the new smaller head, and Back to School Holly, so you can compare different versions. 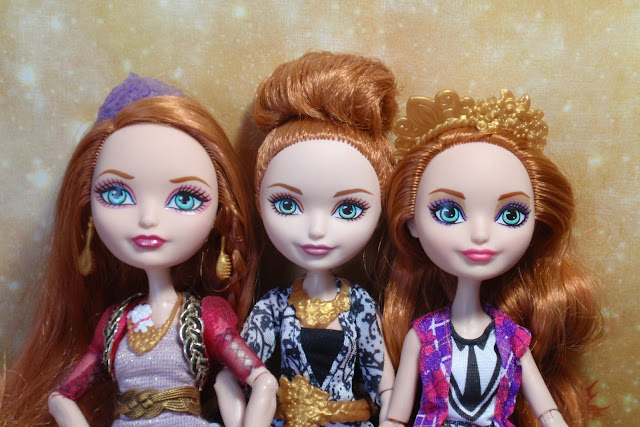 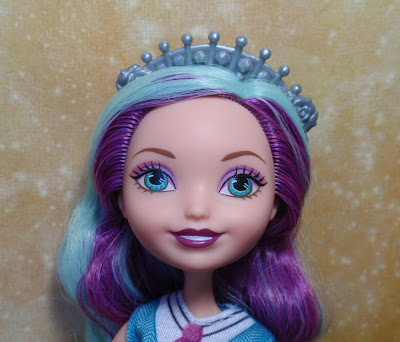 I had to take a picture of Maddie's boots in direct sunlight. The camera just wasn't picking up that bright pinky-fuschia color she wears. Although in the sun, I think the color here is a bit too hot pink. I just couldn't get a good color representation. 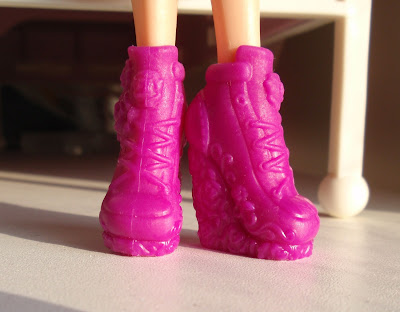 And here is a trio of Maddie's for another face comparison. We have original Maddie, Epic Winter Maddie, and the new Back to School Maddie. The original Maddie certainly looks less like the cartoon Maddie than the newer two, although none have Maddie's rather manic smile. 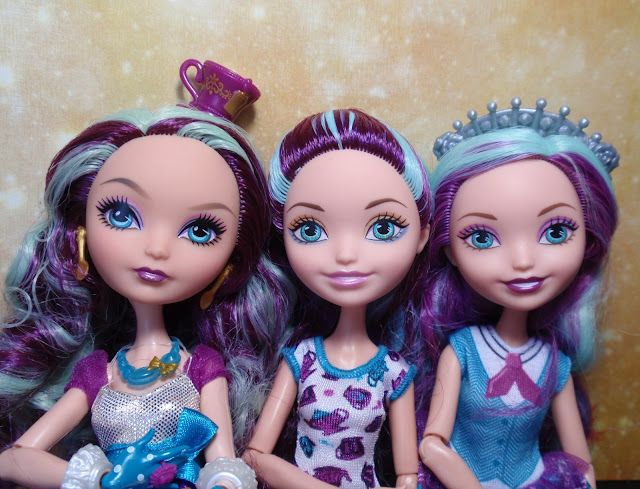 Also just so you know, the middle Maddie and Holly have both been rebodied. I don't think Ballet Holly had bending arms. I forget what Epic Winter Maddie's top half was like.

Since there isn't a lot to review with these dolls, I'm going to do a list of pros and cons of the two new girls, both as themselves and within the EAH line.

Pros:
- More Ever After High dolls, and more of a chance for Mattel to see there might still be a market for these girls. Holly, Maddie and Meeshell are already sold out at their regular price on Amazon, and they're now only being offered at $42.99. I wish I would have thrown Meeshell in with this order, but the prices should come back down again, as they have with previous doll lines. When I ordered my two late last week, I grabbed the last Maddie at regular price.

- The hair items and shoes are nice, and the laptops are a great accessory.

- Both dolls have soft, non-gluey hair. And Maddie is just a very pretty doll. Holly may improve with new lip color.

- Full articulation. The three Back to School budget dolls, with bending arms only, are all still available at their regular price on Amazon. I'm not sure if that means just collectors are snatching these up, or if there are some parents who buy the articulated dolls for their kids.

Cons:
- The "purses" are not only a recolor of something we've already seen, they're kind of boring. On the other hand, the books are consistent with the theme.

- The dresses are boring. Holly's only real theme item on the dress is the print of the skirt, which has several braided ropes. I didn't pick up the skirt very well in my picture, especially since it has the tulle overskirt. :( Maddie's dress doesn't have anything to do with Maddie, besides being in her colors.

- I didn't get a picture, but each doll comes with a student ID. Maddie's ID has Holly's signature on the back, and Holly's has Maddie's signature. That's just odd, and shows a lack of quality control.

- As an EAH fan pointed out, it would have been cute to name these dolls Book-to-School. That shows a lack of serious attention to detail with these dolls. Considering we've been waiting since March for these dolls, it's not like they were rushed onto the market, but it certainly doesn't seem a lot of time was put into designing these. If you go to Amazon, there are also new budget Ashlynn, Maddie and Briar Thronecoming dolls that are appalling compared to the original Thronecoming release. Why couldn't those dolls just be going to some kind of regular dance?

So I'm going to be brutally honest here. I'm glad I own Maddie and Holly. I'm going to buy Meeshell when she gets to be her regular price, especially since I don't have her original version. But I think we need to see better from Mattel if the line is going to continue. At this point, I don't know if Mattel wants it to continue, although if that's the case, why wait so long to release all these new dolls? September or October would have been a far better time to release Back-to-School and school dance themed dolls, if Mattel wanted to sell these to anyone but non-collectors. At this point, what parent is going to know about these new EAH dolls, and what kid is still a diehard EAH fan? Plus, Mattel has only now gotten around to releasing the "EAH/Monster High universes meet" book that so many collectors of both lines have been clamoring for. Is Mattel trying to make a few weak attempts to keep interest in EAH/MH alive while they retool? Or are they just throwing the last shreds of ideas they had out there to make a few more bucks?

It's obvious that Mattel's in trouble. Its earnings are down, and while this is partially blamed on the collapse of Toys R Us, Mattel is just not bringing its A game. The new Barbie body types don't seem to have been a big boost to sales relative to the hype they received, and what else is there very exciting from mainline Barbie, or any other Mattel doll? Now Hasbro is expressing interest in merging with Mattel (h/t EverAfterHighLove). Mr. BTEG agrees with me that the Federal Trade Commission probably wouldn't let this go through, but it does seem to indicate that Hasbro sees Mattel at a very weak point.

These dolls are cute, but if this is the best Mattel's got, I don't expect to see its financial future improve anytime soon.