Sewing for 16" Dolls, Designed By Me -- Update with Movie Answer

Now that Eldest Daughter has moved out and is getting married, Mr. BTEG and I, with the help of Youngest Daughter, are reconfiguring the second floor of our home to give us more room to pursue our hobbies. A table for my use is going into our new hobby room this week, so I'm holding off taking doll pictures until that happens. In the meantime, I talked with RagingMoon about some of the 16" doll clothes I sewed a very long time ago, and she expressed interest in seeing some of the pictures. And when I say a long time, I mean at least fifteen years or more. So you'll also get to see some older dolls.

First up is Franklin Mint's vinyl Lily doll. Her more famous FM counterpart was Josephine; they share body and face sculpts, but Josephine got the wardrobe trunk and all the outfits. They were dressed in clothes from around the turn of the last century, and their figures were also perfect for the era, featuring the S-bend that was popular in the early 1900s. Unfortunately, their bodies are not really articulated. Anyway, here's a cotton chemise and drawers that I made for Lily. 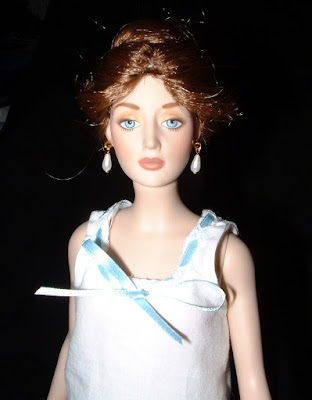 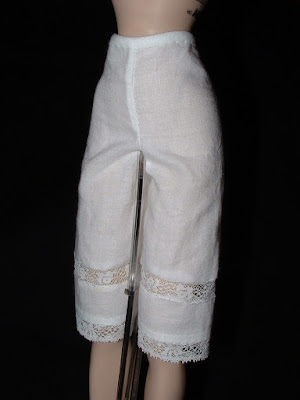 And here's Josephine wearing a petticoat that I made, and a muslin 1890s balloon sleeve style bodice that I was drafting, and then a green chambray dress. 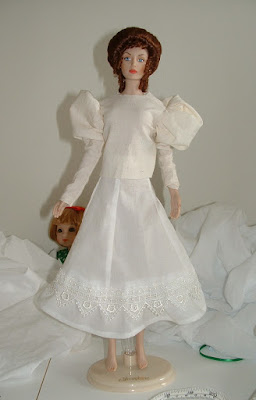 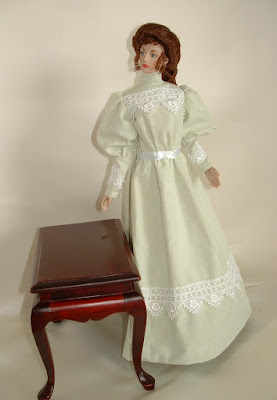 Here is Tonner's Daphne wearing a two piece jacket and skirt outfit. This outfit is the only one for which I did not design the pattern. The pattern is the work of Vince Nowell, who at one time was extremely famous in the doll sewing and collecting community. 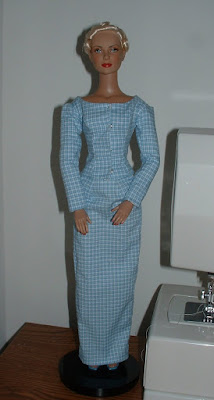 I owned some dolls from the Gene line by Mel Odom for many years. Here's Madra wearing a dress from a pattern that I designed. In this one, I was going for the feel of a 1930s day dress. 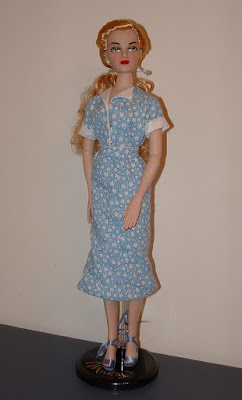 Here is a raven-haired Madra wearing a costume I made for a secret gift exchange, run by the owner of a Gene doll forum that I was on at the time. You win the internets for a day if you know the movie from which I took this costume. I'll update with the info after a few days, unless somebody guesses it first. 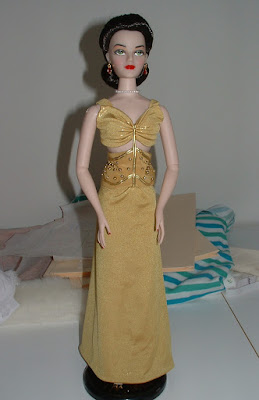 So, the movie was a 1939 film called The Women. The entire cast of the movie, including some pets and other animals seen in the film, was entirely female. The three leads are all well-known names in film: Norma Shearer, Joan Crawford, and Rosalind Russell. I based this costume off the dress that Joan Crawford wore in the climactic scene of the movie. She's wearing it in this still of the three stars of the movie. 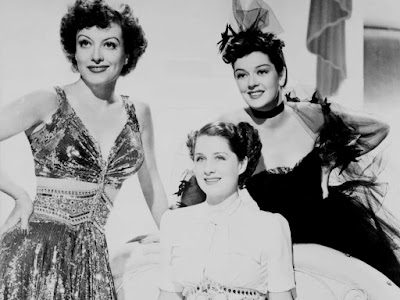 Unfortunately, I couldn't find a gold fabric that was as "sparkly" as the dress Joan is wearing, but I thought that it still turned out okay. I've always thought that the doll Madra's personality in the Gene line was perhaps partially based on Joan Crawford. Madra is a Hollywood star like Gene, and she usually plays roles like Joan Crawford does here; Crawford's part is that of an assistant at a perfume counter, who's out for a wealthy husband, and doesn't mind being a home-wrecking hussy to get one. (Does anyone use the word hussy anymore?)

I accepted a commission to make a dress from the opening scene of the movie Breakfast at Tiffany's, which would fit the Gene doll. The collar in back ended up being a real pain to draft. I lined the whole thing in white, to try to prevent staining. 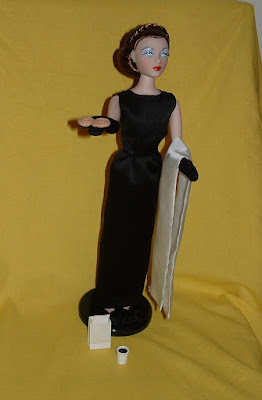 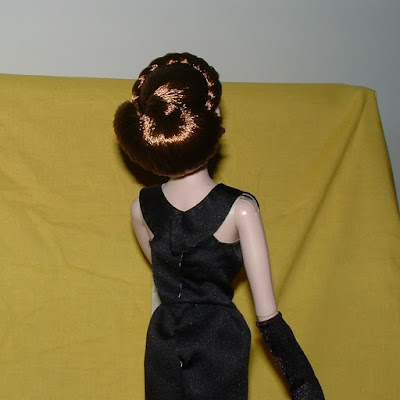 And lastly, an entire costume which I designed and made myself, for an Ashton Drake design competition for Gene. This one I've had on my blog before, but I don't know how many of you have seen it. The look for this one is from 1907. 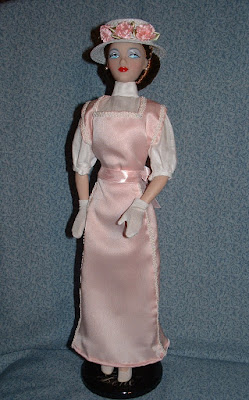 I hope all of you have enjoyed this trip down memory lane! Once my table gets up in our new hobby room, I'm going to try to get some photography backgrounds and my photo tent set up permanently, or at least mostly permanently. I do have lots of new things to share!

Sig was relieved the next morning to see that Addi was not as uneasy and worried as she had been the evening before. It didn't seem to be particularly like her, though, to seem so relaxed in the face of the uncertainty about this situation.

"I got some good ideas from some of the things that you said last night. I've got a plan laid out," Addi replied with a smile.

"So you're the brains, and I'm the brawn?" Sig flexed his arm teasingly, but didn't press Addi to reveal her thoughts. Observing her at the site of the chateau remains would tell him much more about the way that her mind was working. He put the issue aside to concentrate on eating the hearty breakfast with which their hostess had provided them. 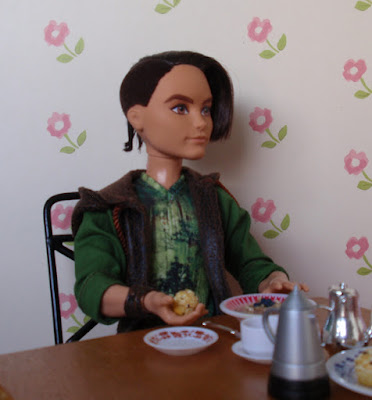 "I do need to tell you one thing before we start out," said Felicie. "We are going to have to be very cautious in our exploration. Our Queen, Eleanor, has declared it illegal to explore or excavate at the chateau ruins. Fortunately, we have an excuse to at least be on the hill on which the remains sit. There is a type of wild rose, called la rose epineux, that grows very thickly on the hillside. You might have seen the plant for yourself in my gardens when you arrived yesterday. I grow vegetables and herbs to eat and to sell, but I also grow plants for medicinal and health uses. Rose hips from that strain are full of vitamins and make a good tea. As the best time of year to gather them has just begun, it's a perfect cover to be on La Colline Chateau, although not up to the top height. I think Queen Eleanor would forbid her subjects from being near the area at all, except that the roses seem to thrive there more than any other part of this region. I have hard work to maintain the few bushes that I have in my garden." Felicie stopped herself here from getting into a discussion of soil and drainage issues. 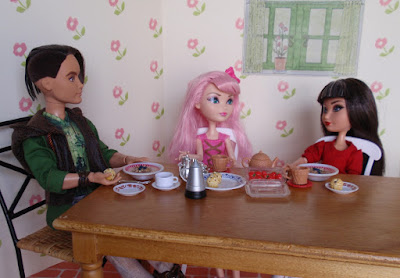 Addi was more interested in Queen Eleanor's attitude. Addi's own work was preserving these time-worn stories of magical beings and happy endings, or not. She always found fascinating how the outside world saw her life's occupation. "Why are the ruins forbidden to explore? Are they unstable, unsafe?"

"Your cousins say no." Felicie folded her hands on the table. "There has always been interest in the place, to varying degrees. Sometimes people seek to visit looking for ghosts or hidden treasure, sometimes it is only an object of curiosity at the center of a quaint fairy story. But Queen Eleanor dislikes having the old story even mentioned at all, so the Chateau Corseul is forbidden to be spoken about, much less viewed. The Queen gives off the impression that she finds the old tales a slur to her royal lineage, reading between the lines of what I've heard her say." Felicie shrugged. "Well, of course, there are some versions of The Sleeping Princess that aren't really suitable for wholesome children's tales," she added wryly.

"You're the resident authority on this story, then," Addi said.

"Yes, I've always had an interest in it, perhaps because I've been gathering roses there since I was a little girl. And speaking of roses, we should get started." Felicie turned to Addi. "We'll start by doing some actual work with the flowers, and then you and Sig should be able to do some surreptitious exploration on your own. I hope we'll find something. Your cousin Louise seemed certain that you would."

2. For the time being, I've given up on having the proper accent marks on French and other languages' words, because I can't get the formatting right. If you have any tips on how to do this with Blogger, let me know. I might do my own experimentation as well, but in the meantime, no accent marks.