About a month ago, I acquired the 1/6th scale Kenmore kitchen, and I got it out to photograph for a theme on Instagram. I want to take more pictures for this blog, but I have some other things that are taking up some of my time at the moment, so I'm just going to put this picture up that I also used on Instagram. The theme was "Kitchen," and I thought it would be cute to include my Little Tikes kitchen, which is small enough to be a toy kitchen for the 1/6 scale little ones. It's kind of special to me because it's exactly the same as the play kitchen that my daughters had when they were little. 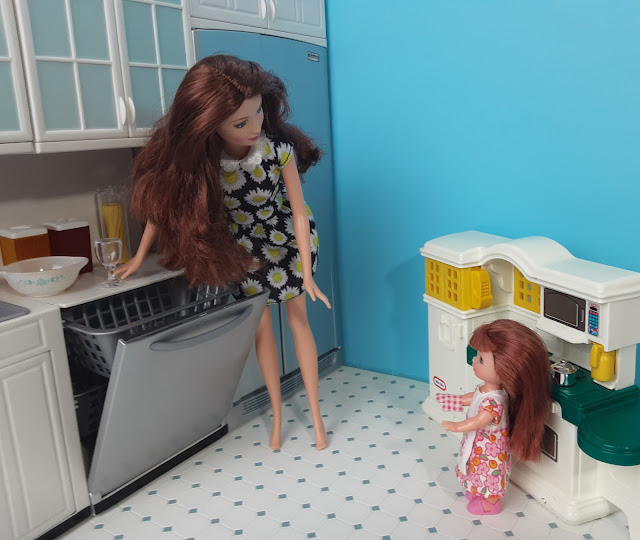 Erin and Ju-Ting are celebrating St. Patrick's Day at their favorite Irish bar. 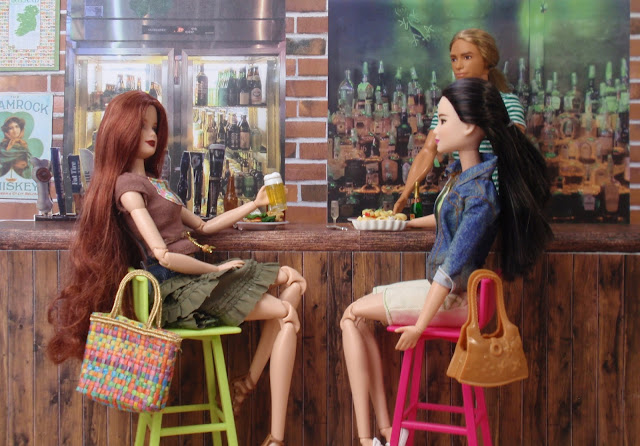 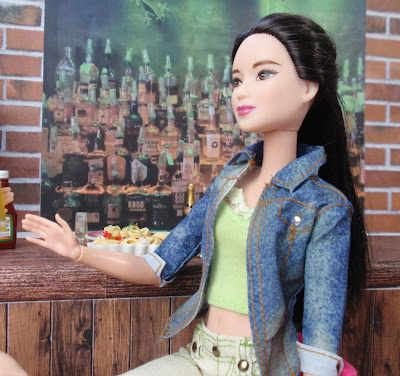 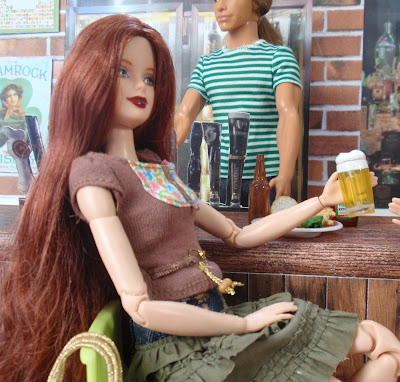 I ended up having to take pictures at my own favorite restaurant to use on the backdrop wall of the bar, because it's really hard to find good pictures online that aren't quite expensive. It was fun to make, though. Hope you enjoy St. Patrick's Day if you're also celebrating!

This is part two of the dolls that I bought from Rachael. There are seven dolls in this group, including some new face molds. Two of these dolls got new bodies, too.

Three of these dolls all have a headmold marked with 2000, which means they should all have the Kayla/Lea face. The girl with the green eyes has the Summer mold, from 2003. According to Katti, the dolls with this headmold have "blown up" looking heads, and I can't argue with this. I'm not sure how she'll fit in with the rest of my crew. What do you think? 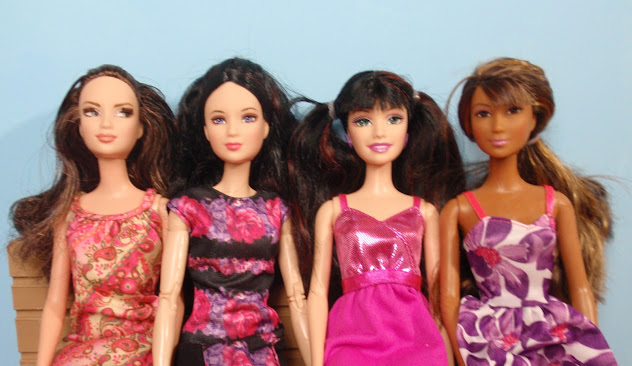 We'll call this first doll Kayla. The direction her eyes are facing is unusual, and I don't own a lot of dolls with eyelashes. Her lips follow what I think was the unfortunate trend of outlining your lips in a different color than the lipstick. 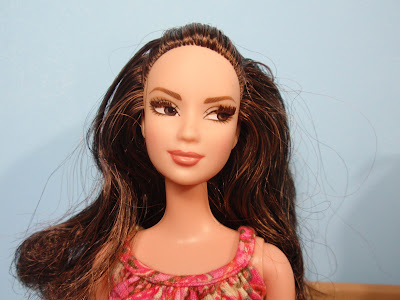 For now this next doll can be Becca. Looking at her next to Summer, it looks like maroonish looking streaks were a thing for awhile? I think I vaguely remember my hair stylist sister-in-law having these colors in her hair at some point. 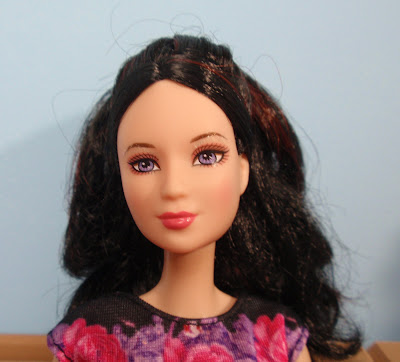 I wondered if Summer was originally a fairy from one of the Barbie movies, because of her slightly larger head and big eyes and open expression. 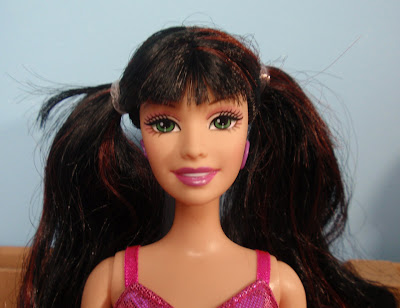 The last one can be Cara. She's got an interesting look, and odd hair. She's got the sideswept bangs, but then she's got a short piece on the right side of her head that really isn't part of the bangs. The braid on her left side also will make styling awkward, I think. It's hard to see the braid the way I pulled her hair back. 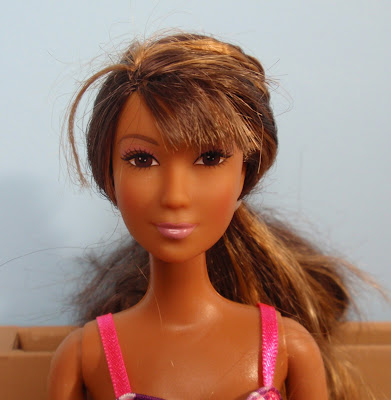 Of the next three, the first one has the Mackie face, which came along to save us from the monotony of the Superstar mold. I know a lot of people do like the Superstar face, but for me the Mackie face was a nice change of piece. The last two are marked 1998, and I think they both are Ana/Lara faces.

This girl's curls are in fairly good shape in the front, although there is "box hair" on the back of her head. She will need a boil perm at some point. Let's call her... Shirley. For now. 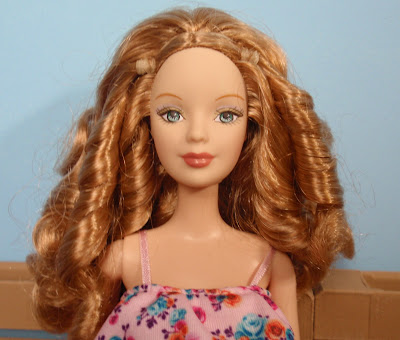 I think this doll should be named Chelsea. She has a husky voice and plays the guitar, and is a little Boho. 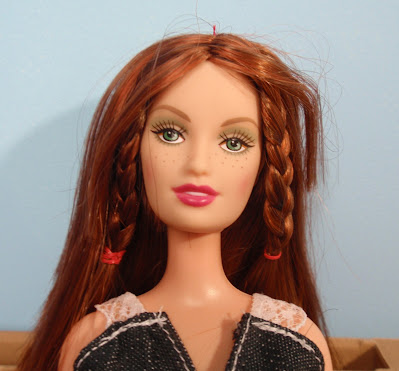 And for the very last, is this girl with the thick blond mane. Her eyeshadow really does not stand out as much as it seems to in this picture. This photo really does not flatter her.We'll call her Ana, since we haven't used that name yet. 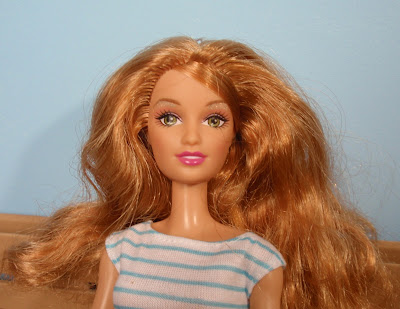 The late 1990s/early 2000s era was really a golden one for Barbie collectors. We started getting new face molds, great outfits, and even some nice furniture. I'm glad that Rachael gave me the chance to own these dolls.

And I don't know if you looked at all what these dolls were sitting on, but it is a pallet sofa, made out of six pallets that Mr. BTEG printed for me on his 3D printer. The couch needs cushions, but it was a great size to use for these pictures. 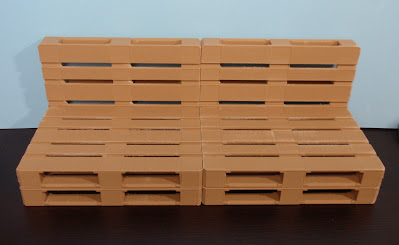