Since the last time I posted about my Tonner 10", or "tenner," line, I've acquired two new dolls. The first is named Strawberry Cupcake Mimi, not to be confused with the more recent release, Strawberry Cupcake Patsy. The second doll is Ann Estelle's baby sister, Lilah. She's 9" according to Tonner's website. I wanted to get a Mimi and a Babette from the Petite Filles line for my tenner collection; there were only a few styles of each doll produced, and the faces are unique, except for a couple of dolls made in Dr. Seuss styles for a Tonner convention. And of course the convention ones are even rarer. 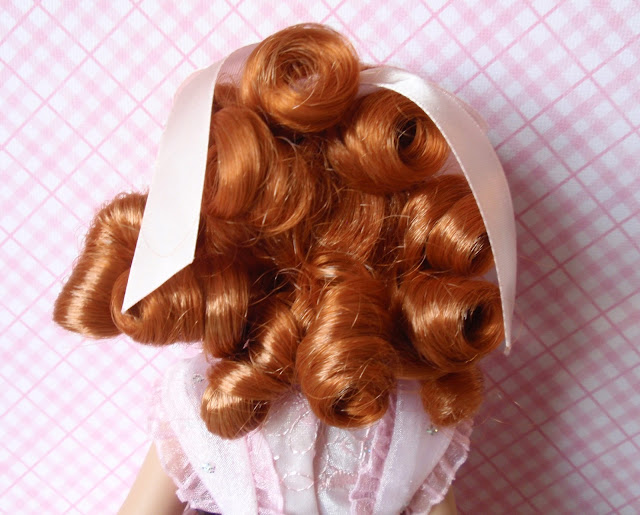 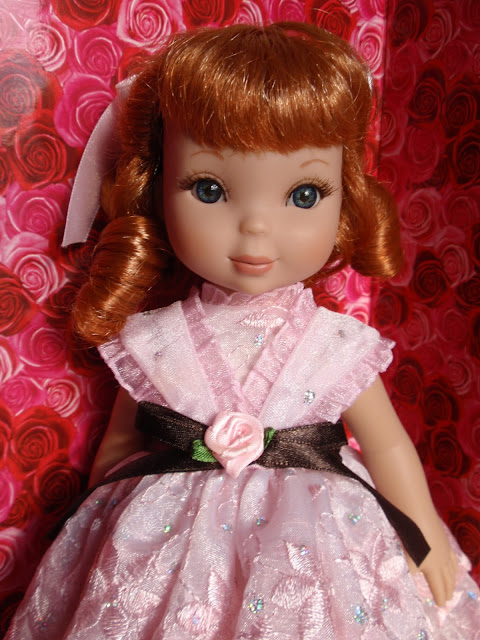 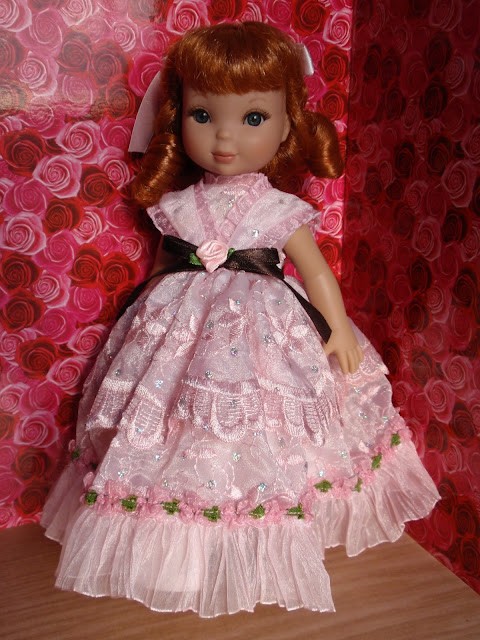 Here Mimi is with two of her 10" friends, from the Mary Englebreit and Patsy lines. They each have very unique faces. Sophie's face is also different from Ann Estelle's, but I didn't want to mess around with that many dolls in the picture just then. I'll take a picture of the whole gang sometime. 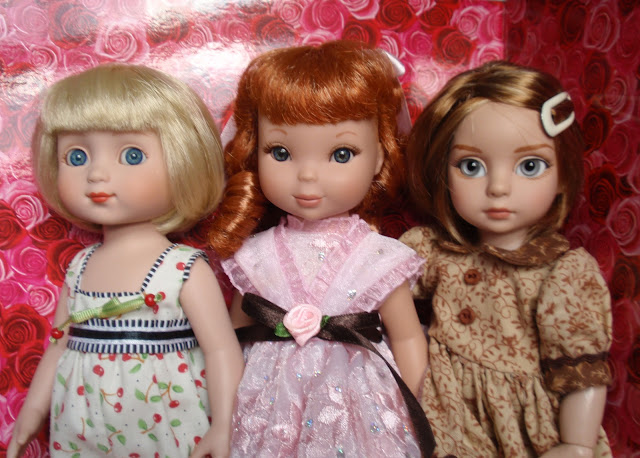 Lilah dolls are relatively hard to find as well. From what I found, there were only three different Lilah dolls produced, and one of those was also a convention doll, and came riding a large seahorse at that, so her value is much higher. I got my Lilah at just above original retail price, however, so it seems she is not hot in the doll market right now. I still like her. :) 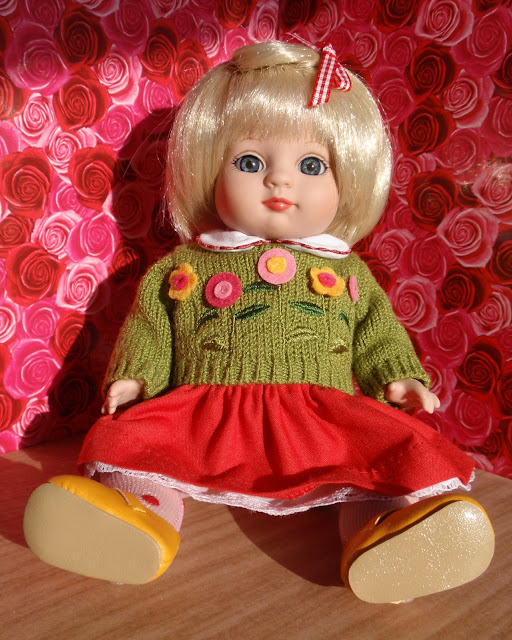 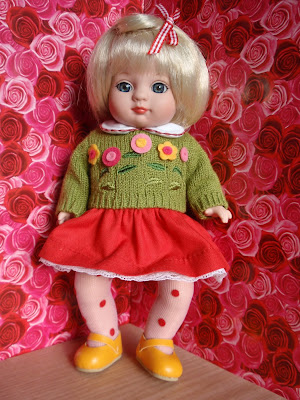 Lilah is described by Tonner as being in a seated leg position. I guess that means she's not old enough to stand up on her own yet. I did stand her up for a couple of pictures, but she doesn't really stand well.
However, the dress underneath the sweater does not have sleeves. The dress is cute, but there is one flaw. In the bottom right of the picture below, you can see a black thread in between the two layers of bodice fabric. At some point I may try to take the dress apart at the waist to get in and get that thread out. It's not like I have to worry too much about ruining the dress; it's unwearable by itself in this state. 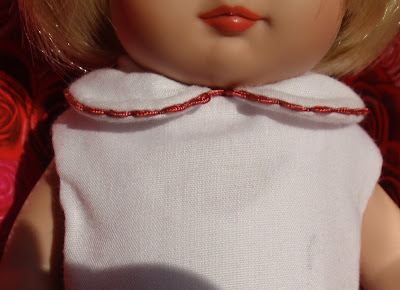 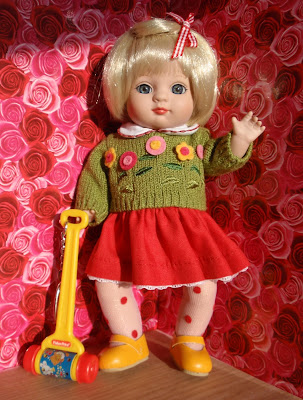 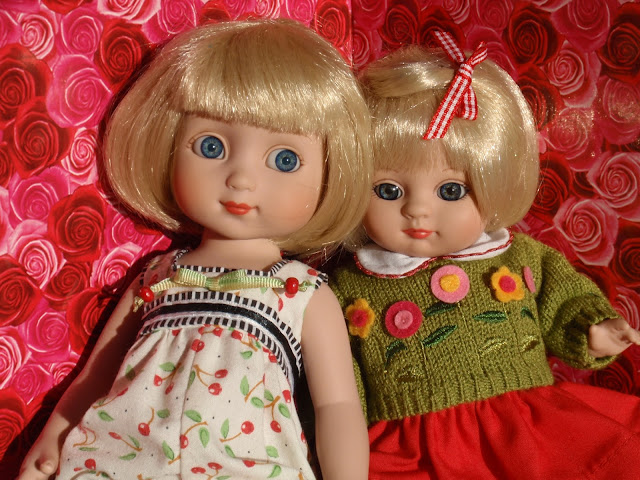 There's also something rattling somewhere in Lilah's body. I may try to get her head off at some point and investigate that.

There are more faces I would like to get for my 10" collection, but I'm not on eBay nearly as much as I used to be, so that might be an issue. I'll talk about the eBay thing sometime soon. In the meantime, I'm glad I expanded my collection of little girls.
Posted by Barb the Evil Genius at 9:07 PM 9 comments:

A Walk in the Park

I've been a little out of it lately. I use a light box from about September through April, to help with my Seasonal Affective Disorder. Basically, when we get less sunlight here during these months, and the sunlight is less potent, my body wants to hibernate. A half hour or so sitting in front of my light box helps. But I hadn't been using it reliably, making me more tired and depressed. I'm trying to change that and get back to regular light box use.

ANYway. Meg and I went to a local park back on October 21st. This park is made for walkers, runners and bikers. There is a long paved path that takes you from one neighborhood to another, a paved path on one side which also takes you through one part to another of my town, and a dirt path. As it was a gorgeous day, there were lots of people out there enjoying the day, but no one seemed interested in what a middle-aged woman was doing taking pictures of a doll. Many people were friendly and said hello. Most of those people were walking dogs. A correlation perhaps?

The main path through the park. Doesn't this look like a magical place? I would like to get out here during the winter when there is snow on the ground and get a picture. 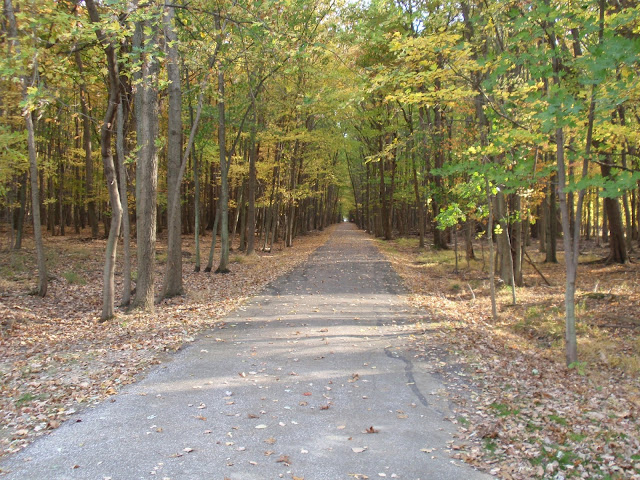 We found a few slender long branches (trees?) which had formed into arches. Meg discovered that the branch bounced up and down when it was pushed. She had fun "riding" it. If I weighed less, I would have enjoyed a little bounce as well. 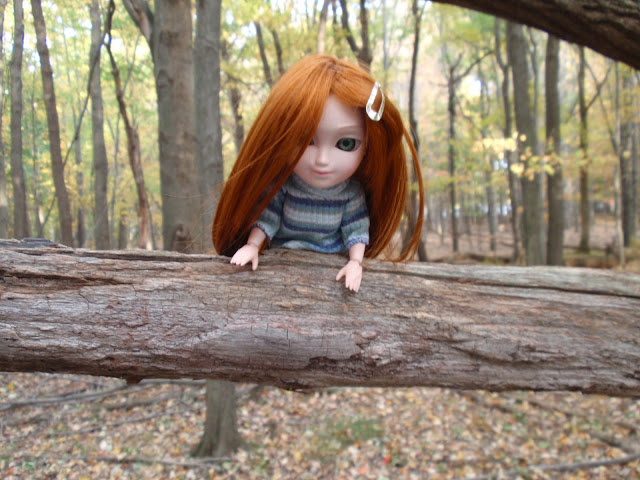 The best place for photography, at least for me, came when we found a place where city park workers were clearing out trees. Not only did one of these large sawed up pieces make a great seat for Meg, there was a bench right next to it, which provided a comfortable seat for this middle-aged woman to take pictures. :) 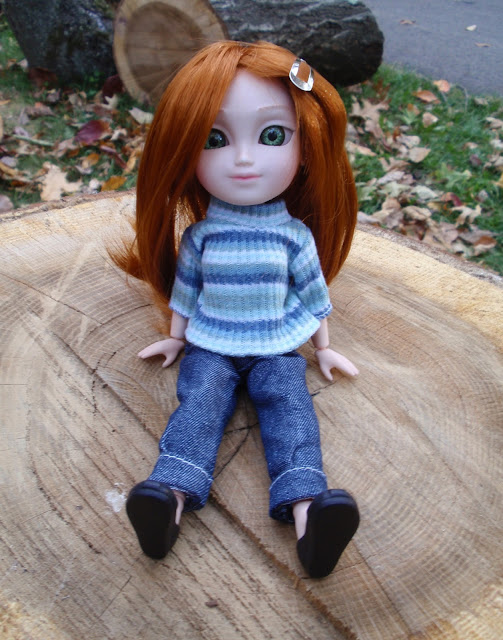 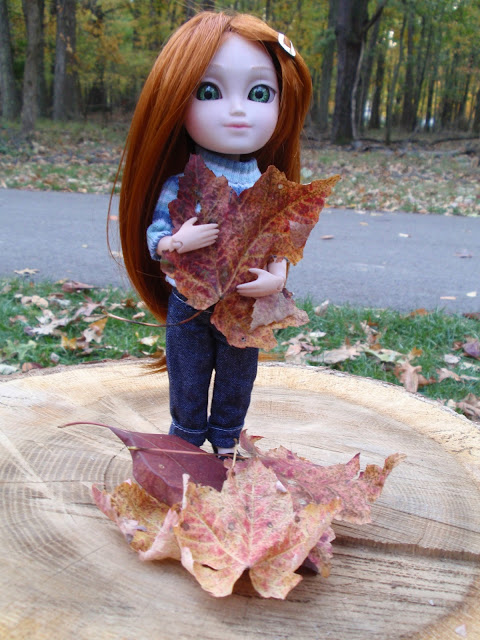 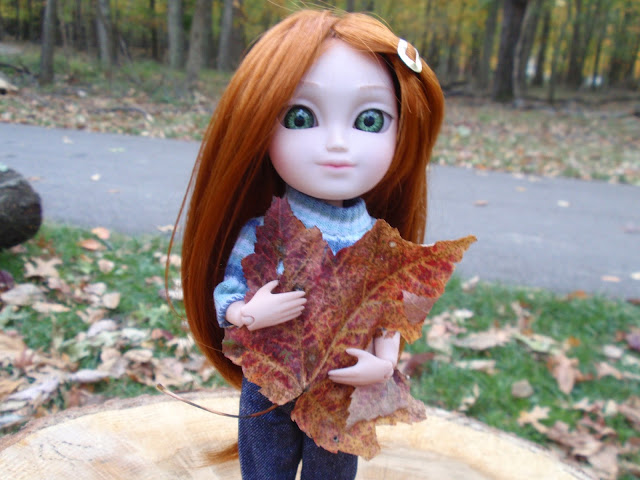 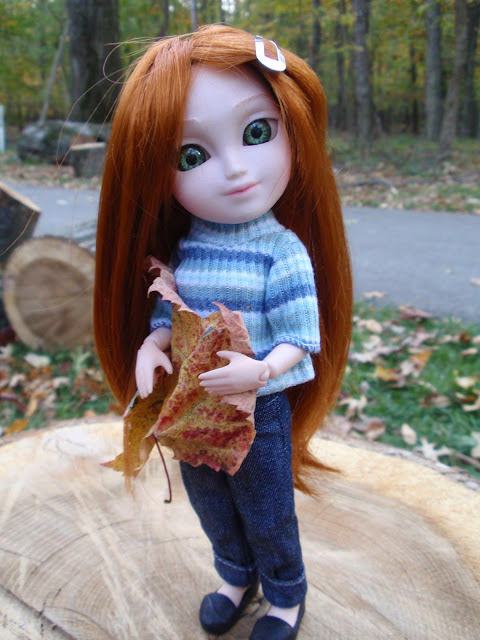 We wanted to find some leaves that were more fiery, like Meg's hair, but this park didn't have a lot of those.

Lastly, a somewhat blurry picture of five does having their dinner in the park. Despite my area being suburban, there are an awful lot of wild animals around, including foxes and coyotes, of all things. 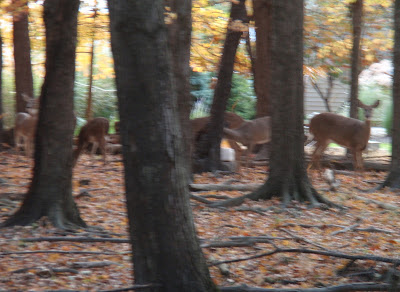 What I've been lacking is large blocks of time to go out and take pictures. This photo time was a rush job, done in between picking up my youngest daughter from school, and going out somewhere that night. Good planning and more energy will hopefully help with that. In the meantime, I do have some new doll purchases which need photo shoots of their own so I can show them to you. Do you find it hard to find time to set aside for doll photography? Or do you accomplish it in small bits?
Posted by Barb the Evil Genius at 1:55 PM 12 comments: