I'm sure at least some of you know about the great products that Re-Ment produces that are doll-size. They are made in Japan and apparently come with candy or gum. The detail and breadth of items that Re-Ment has created is incredible. I've picked up a few items here and there on eBay, and I'm going to share pictures of my latest set. But what I'm going to show pictures of first, is my new set of minis made by another company called ORCARA. I've read its products are Chinese. There's a lot fewer sets produced, but what they make is pretty nice. Please excuse the lighting in these pics. I was going to take them when there was more light outside, but when your daughter says she wants help cleaning her room, you don't want to turn her down!

The ORCARA items are definitely a better value than Re-Ment. I got this entire set, plus more, for about what I paid for the Re-Ment set, which you'll see at the end. 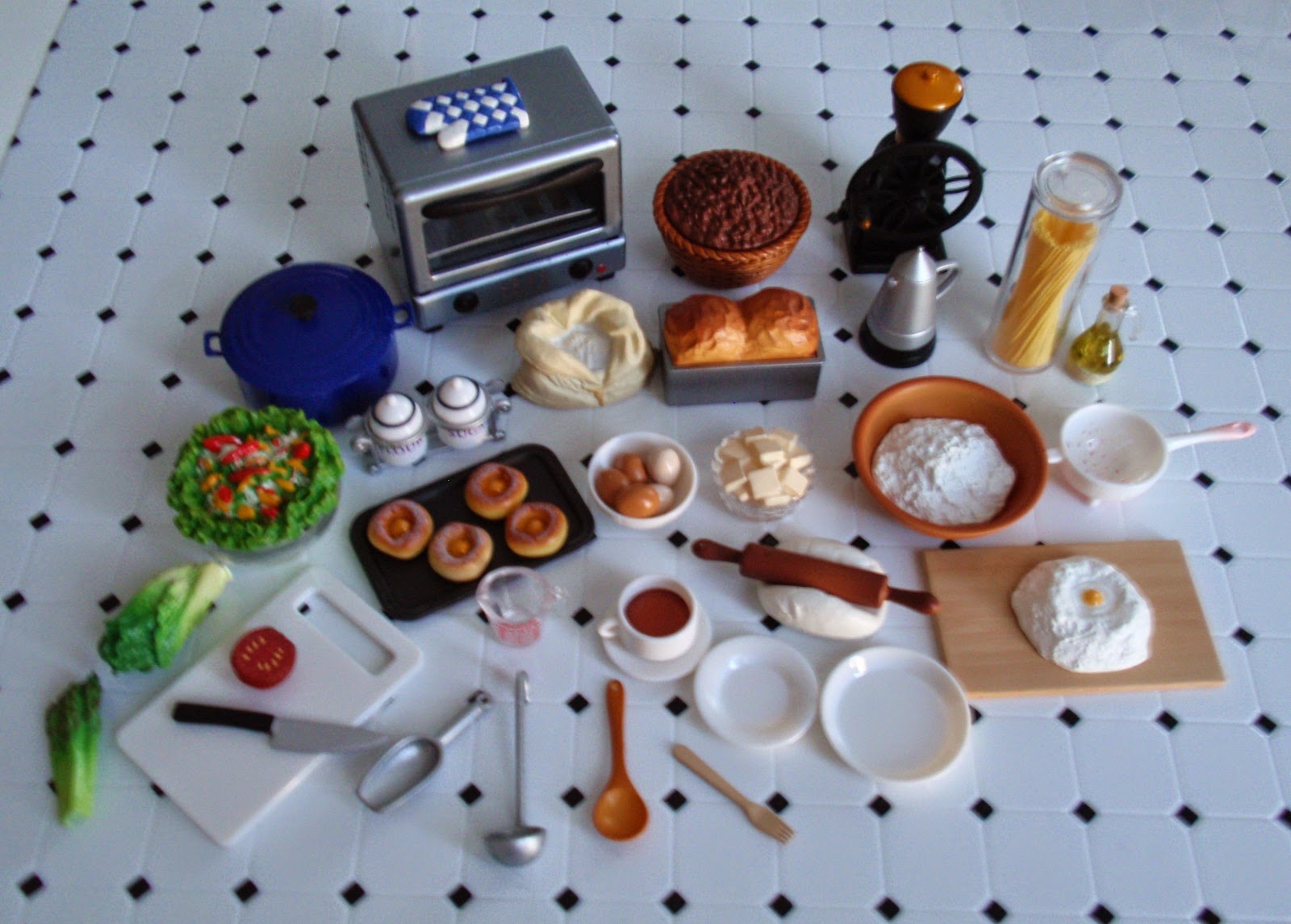 In the picture above is everything that I'm going to keep. The set is called Cooking with the Master. As you can see, there are pieces that enable you to "make" various items, although I wouldn't call grinding and brewing coffee beans, nor making a salad, cooking. 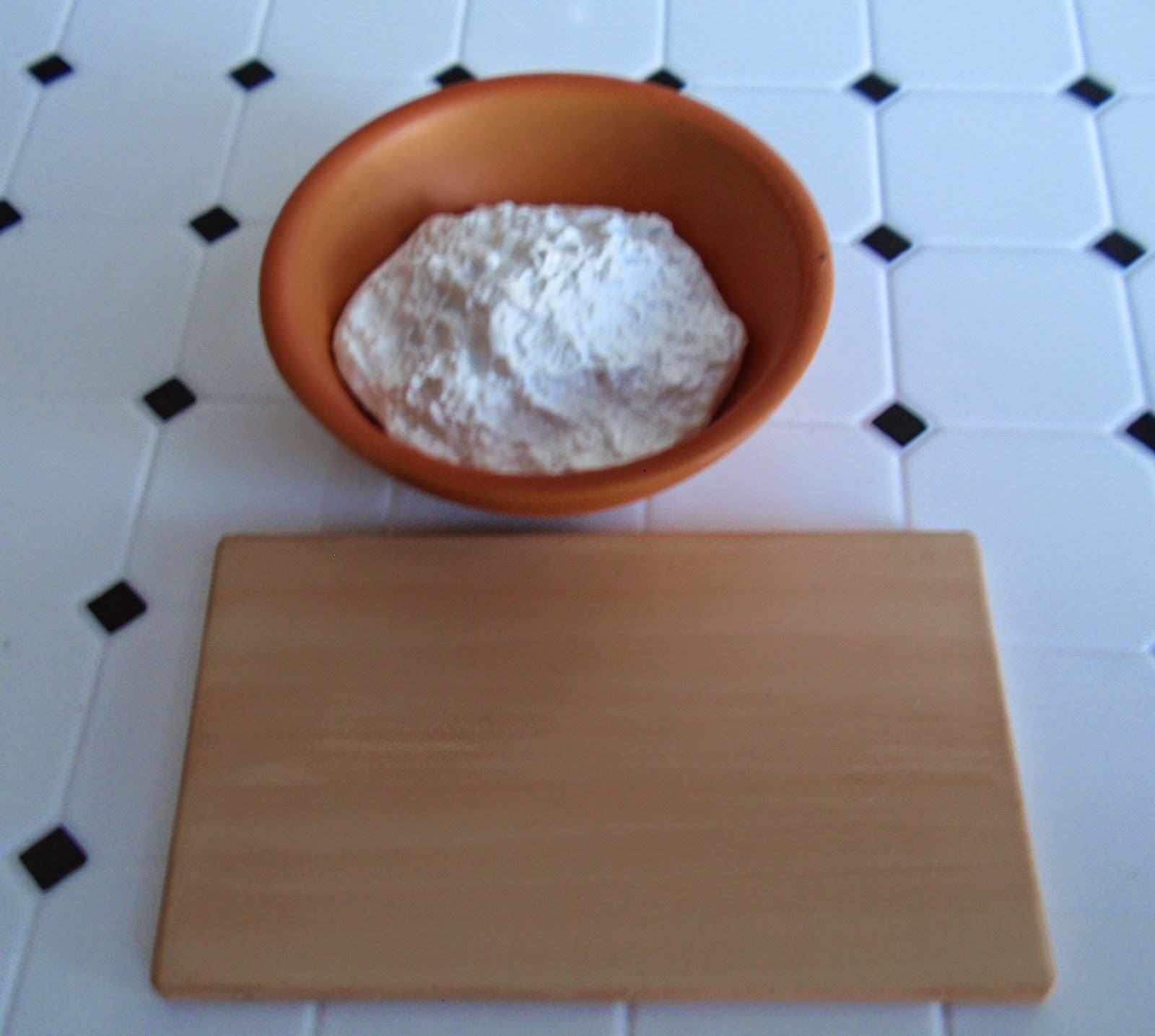 Some of the pieces are incredibly realistic. It really looks like a pottery bowl and a wood cutting board in this picture. 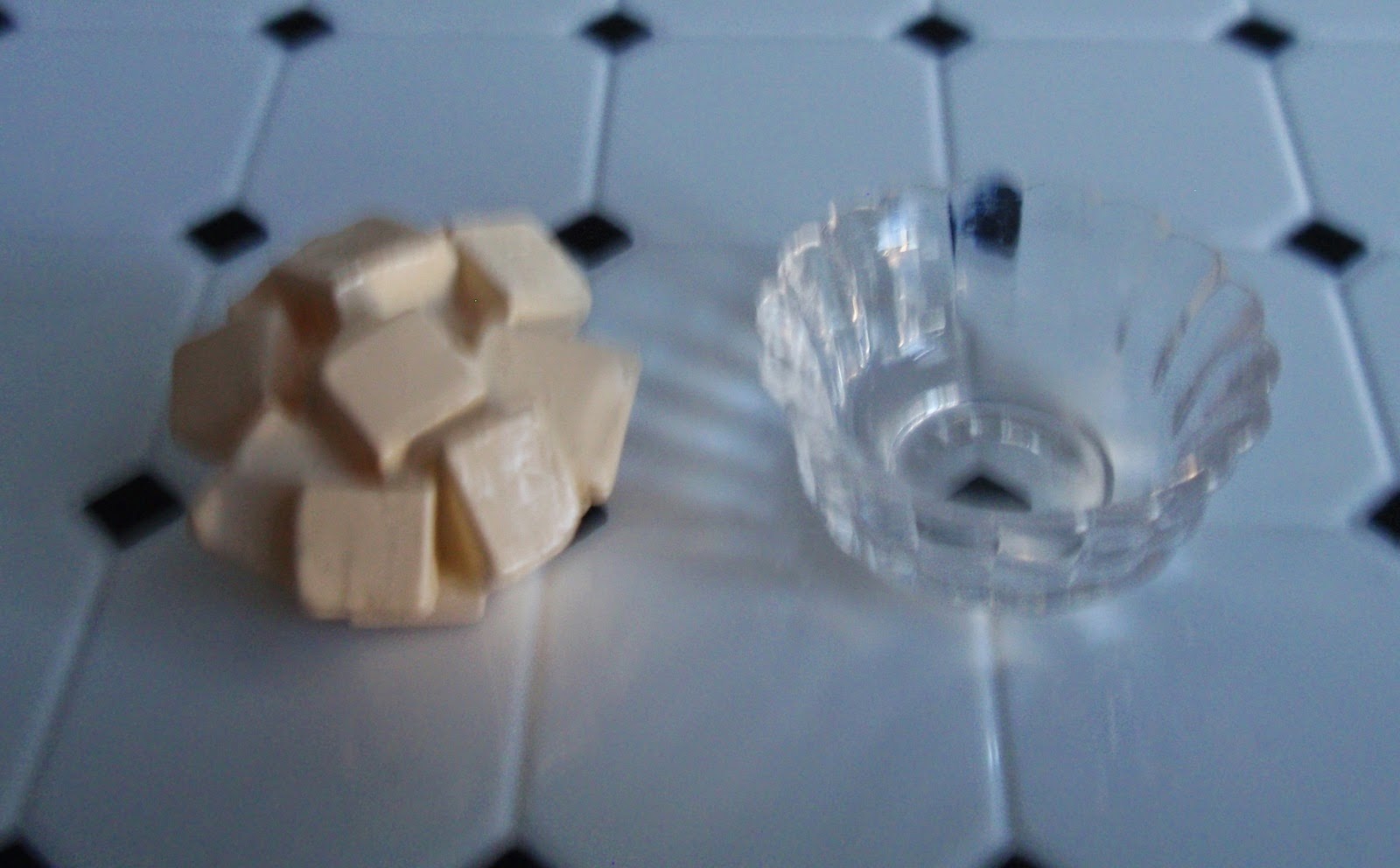 Most of the items can be taken apart. The lids come off of the coffee grinder and coffee pot. The flour and salad come out of their bowls. And there is a tiny molded plastic "milk" piece that can go inside the measuring cup. I haven't put that in for fear I won't be able to get it apart and I might want to do something else with the cup. And as you can see, the bowl that holds the pats of butter looks very nice on its own. 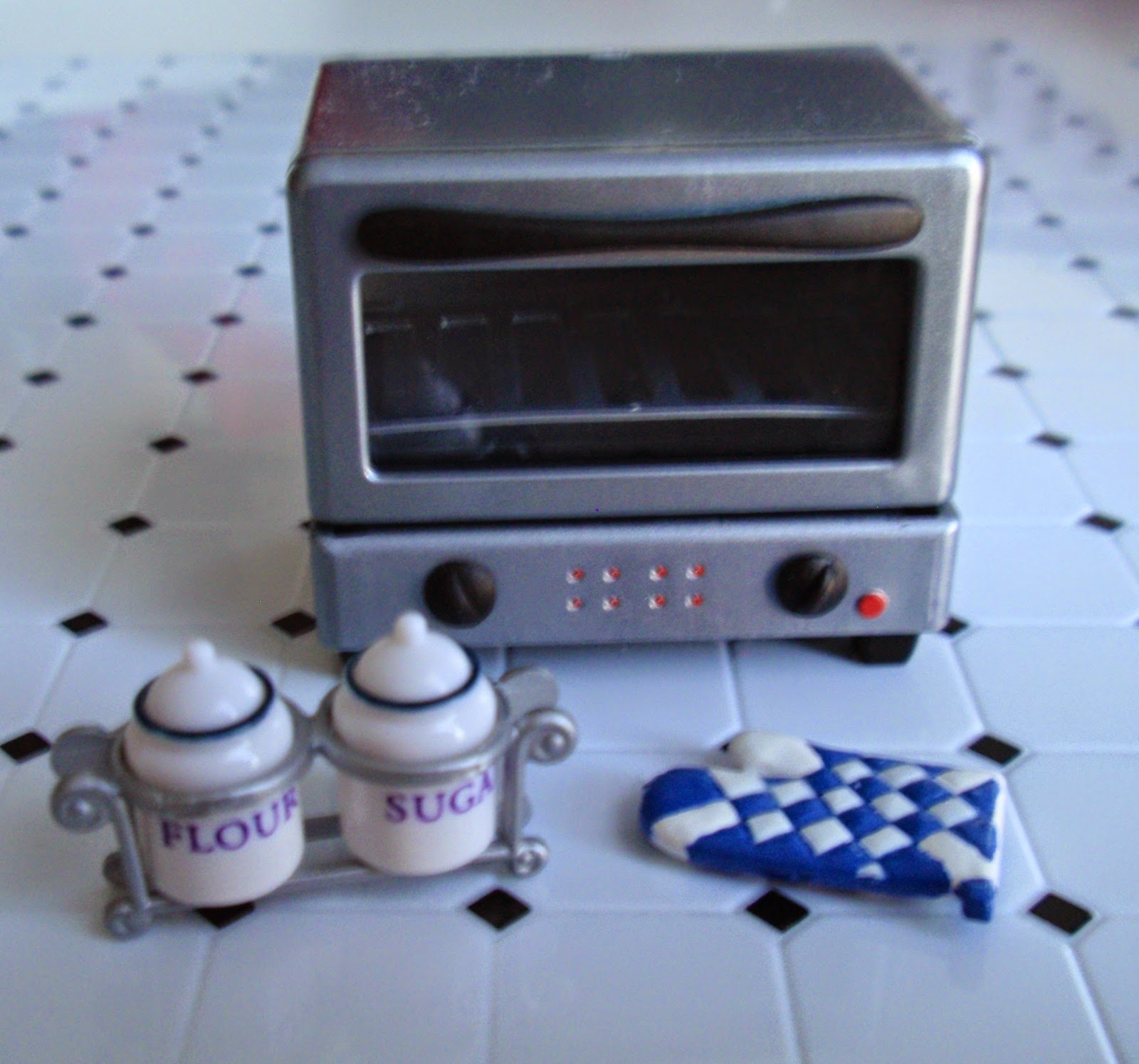 Considering that the toaster oven is relatively in scale, the flour and sugar canisters are unfortunately wildly out of scale. The sugar one might look nice on a tea table. The flour one would be useless in a real size kitchen. 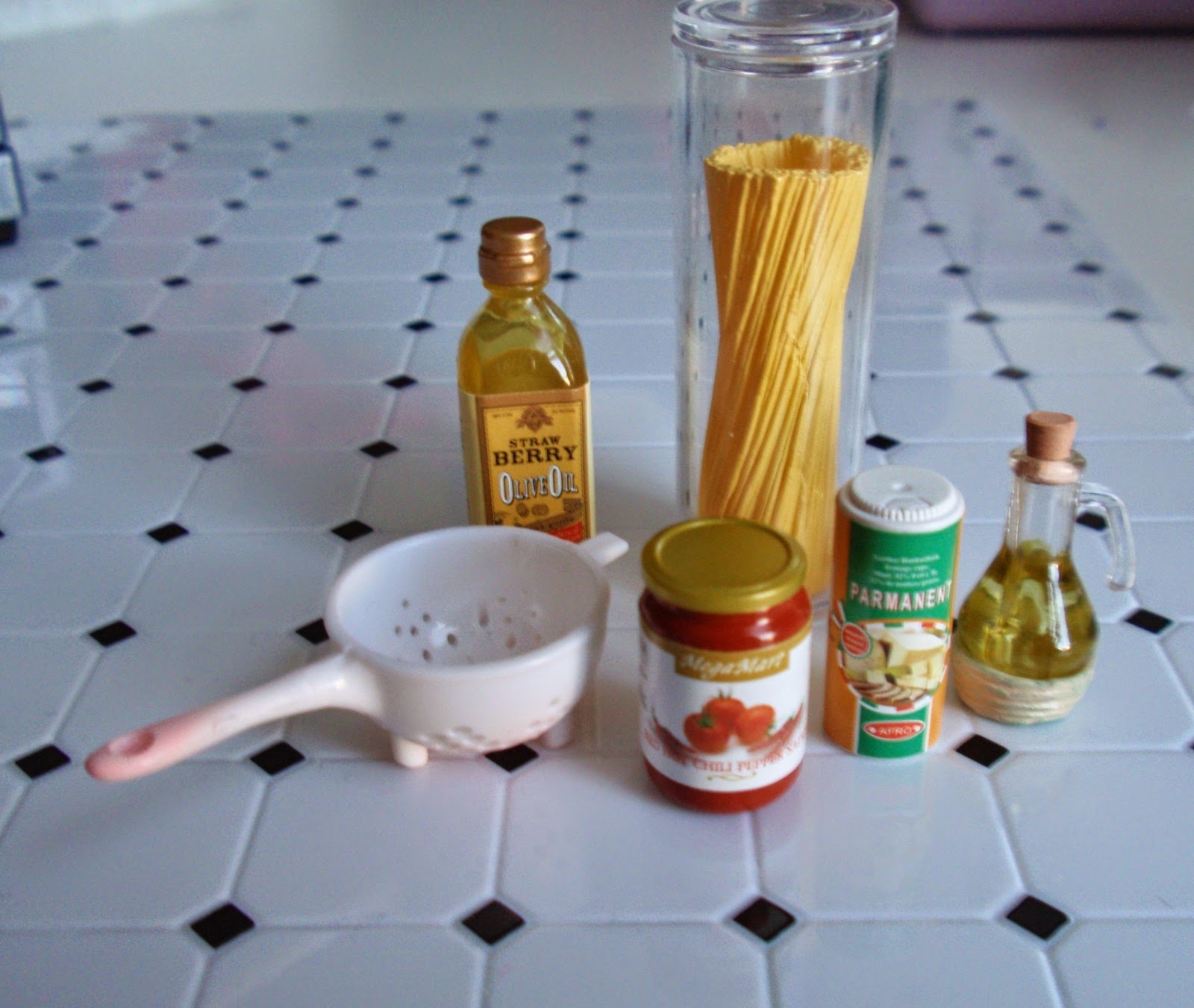 The spaghetti, strainer and corked bottle of olive oil go nicely with a few Re-Ment pieces I've been saving for a long time. 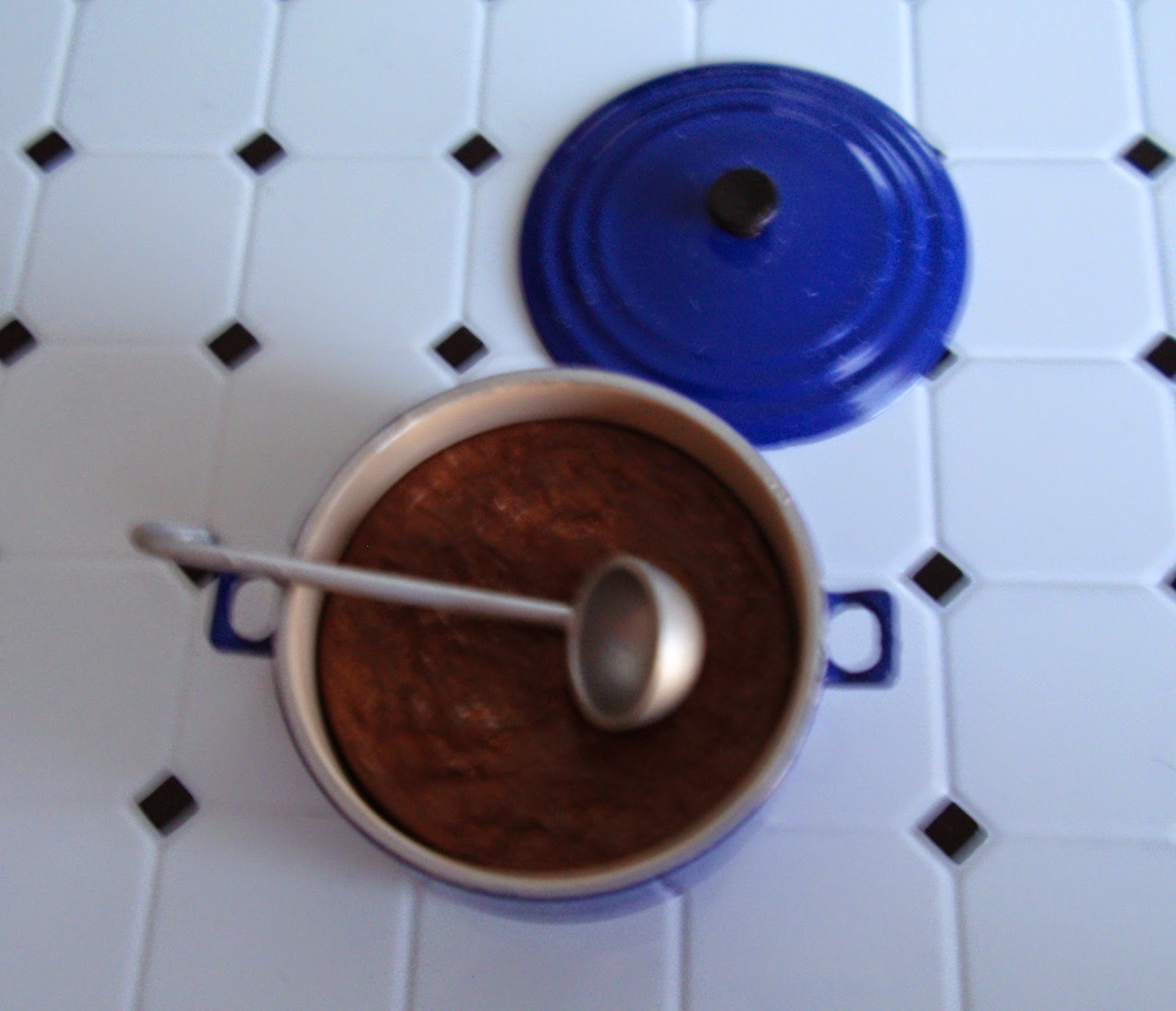 There is something to go in the blue pot, and even a little dent for the ladle to rest in. It's a nice idea in theory, but...

it doesn't look edible or appealing to me at all. Apparently it's supposed to be spaghetti sauce, which makes sense within the context of the set, but it really does look close to this shade of brown in person. To me it looks more like lumpy cake batter than anything else. 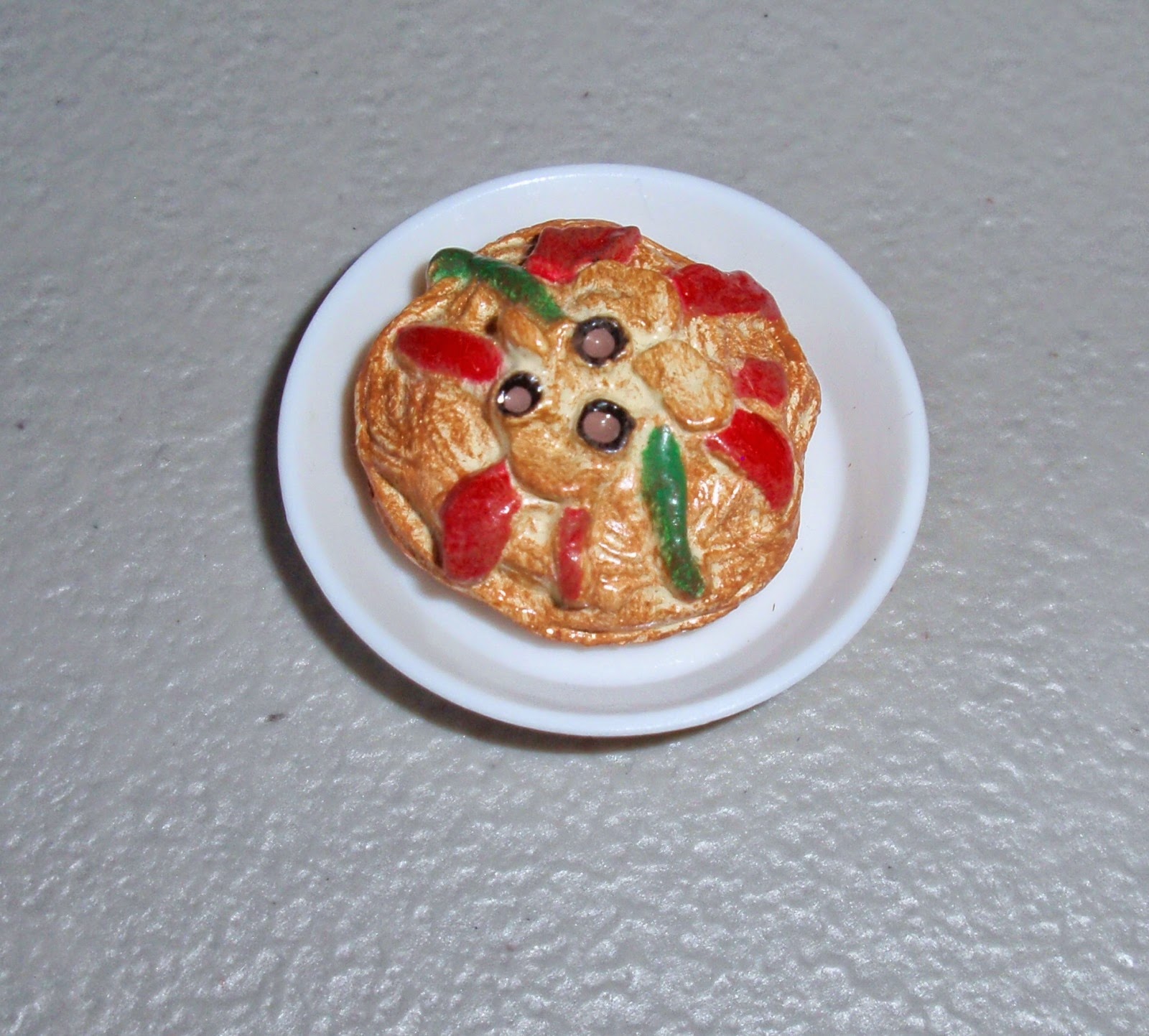 The finished spaghetti product also does not look like any kind of spaghetti that I've ever seen. The spaghetti and sauce pieces will be tucked away somewhere.

And here is my Re-Ment set, a bread machine with bread, oven mitt and jam. 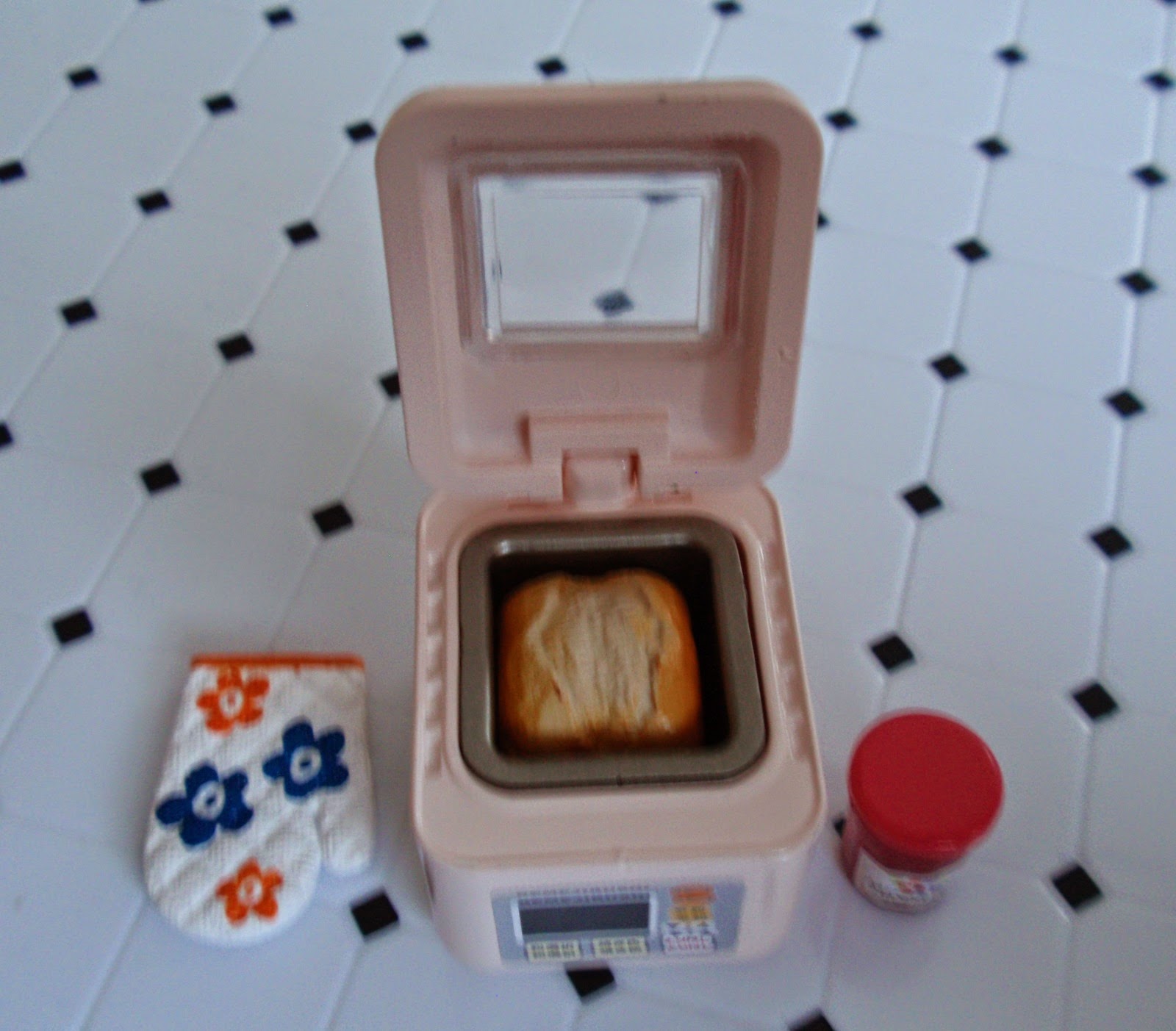 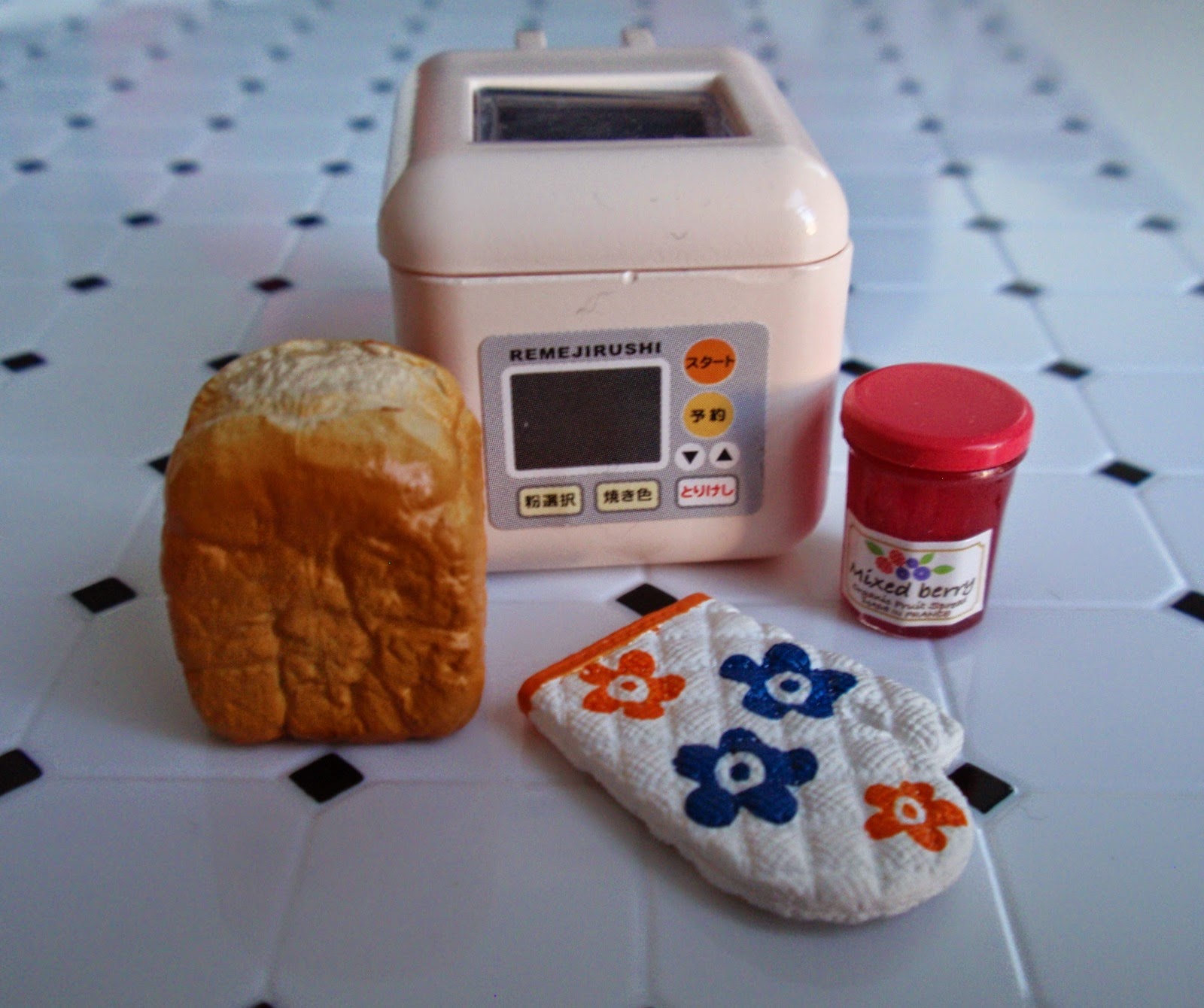 The "glass" lid of the bread maker is a little wonky, but that bread looks good enough to eat. The metal baking pan also comes out. I tried looking up the name in English letters that is on the front of the bread maker, but could not find anything. Maybe it's two Japanese words combined into one. 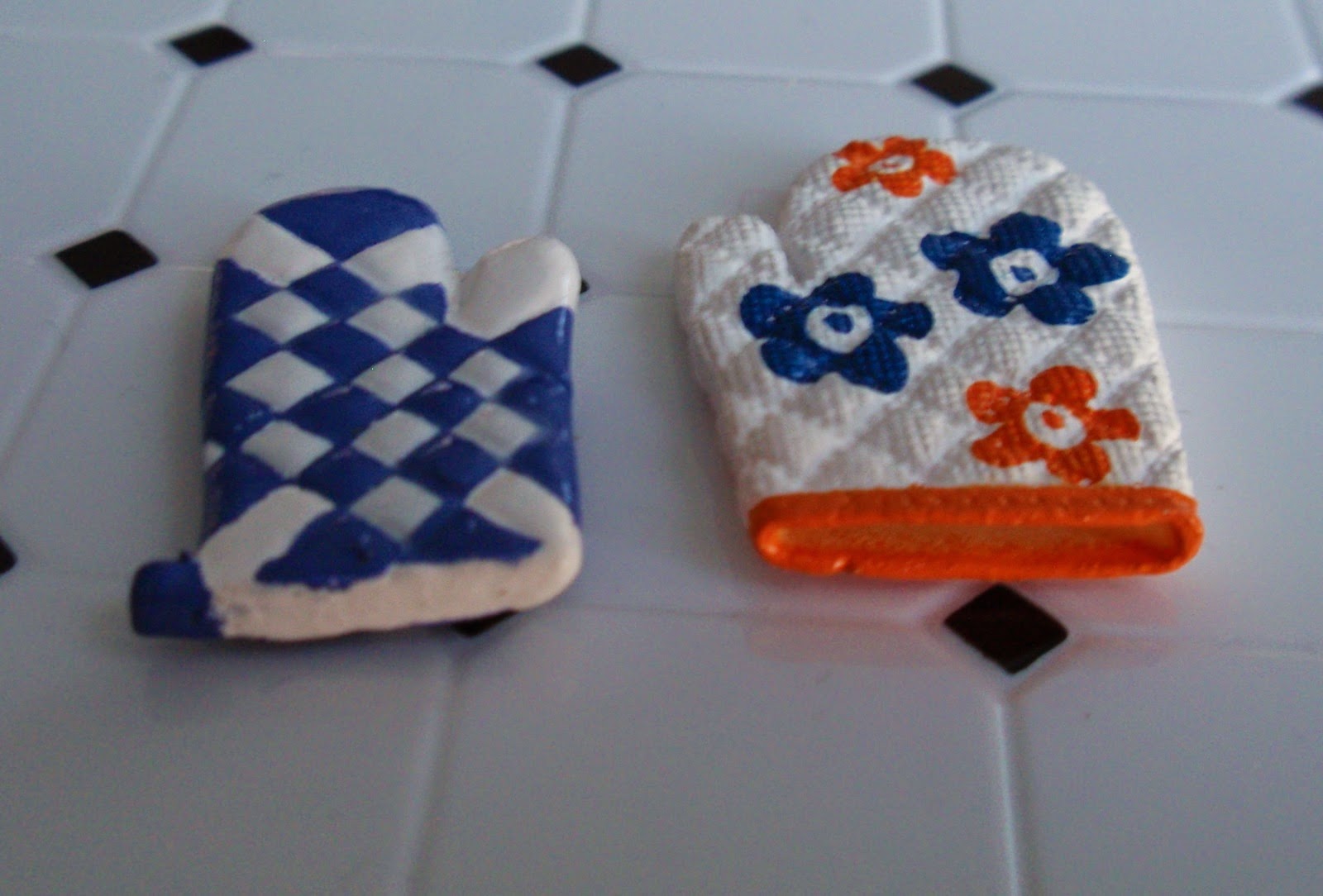 Just for fun, I took a picture of the ORCARA and Re-Ment oven mitts together. The Re-Ment one is more realistic looking, and even has a slight opening for a hand to go, whereas the ORCARA one is sealed shut. I'd be afraid of breaking the doll's hand or the oven mitt if I tried to use it, however.

The other two ORCARA sets I have are still in their plastic bags. One is for making rice balls, the other for making soy milk. Neither of those interest me, so they're going on eBay.

What cute minis do you have?

I've been keeping up with everyone else's blogs, but I can't believe it's been so long since I've posted here. I definitely don't intend for *that* to be a steady thing, but I've been incredibly busy. On June 7th, my eldest daughter graduated from high school. This past weekend was my eldest daughter's graduation party, and my youngest daughter's dance recital. The weather was fantastic for all three events, and family and friends had a great time. But now that all that planning and preparation is over, I'm so ready to get back to normal life!

Since it will take me maybe a few days to set up some doll dioramas for pictures, I'm putting up a picture of my daughters and I at American Girl place in Chicago, from November of 2005. Although AG dolls are a great deal more expensive than some of their competitors, there are advantages to owning them, even if you get yours from a thrift shop, Craigslist or eBay. One of those advantages is American Girl Place. Mr. BTEG worked in Chicago for seven months from 2005 into 2006. Often, he flew or drove home for the weekend to see his girls, but since I was homeschooling at the time, I also could pack up the three of us and drive out to Chicago to spend a week with him. Since we were out there several times, we were able to visit AG Place more than once, and so were able to do several of the activities there, like eating at the restaurant, that would have been cost prohibitive to do all in one trip.

This picture is from the day we had lunch at the restaurant. I didn't bring my own AG doll, Samantha, but the girls had their own dolls with them. At the time, the Musician had her Bitty Baby, and her Just Like Me doll. The Dancer had her Bitty Baby with her, who is hidden behind her at the table. You can see one of Bitty Baby's chubby fists if you look. 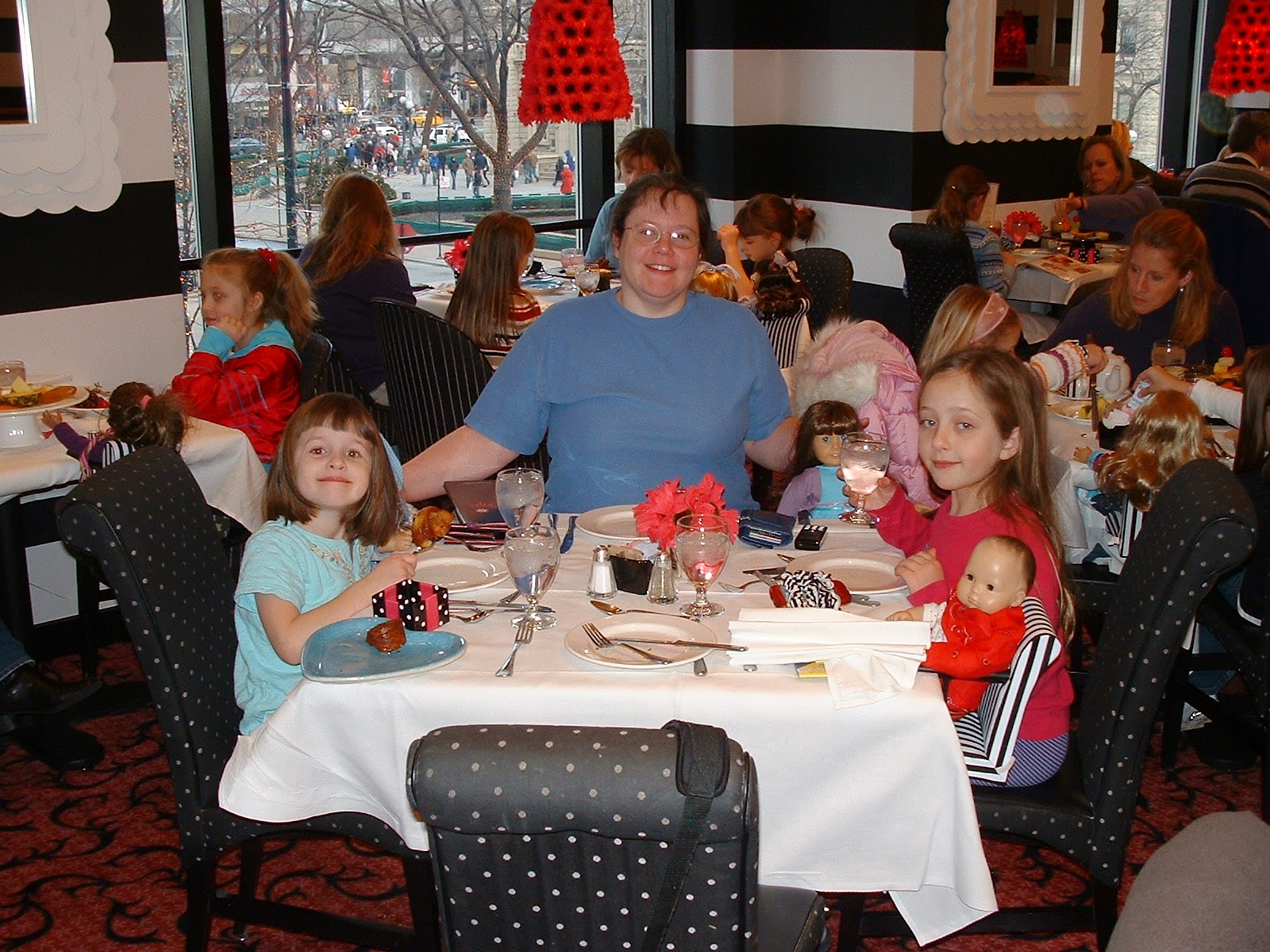 My girls are not doll collectors at the moment, although they have kept their AG dolls, and the dolls were never colored on, nor did the 18" dolls have their hair cut. I'm hoping that I'll have granddaughters someday who will once again enjoy these dolls.
Posted by Barb the Evil Genius at 1:47 PM 3 comments:

While thinking about buying some sort of floor tiling to go with my new kitchen set, I remembered that there is a miniature store about a 25 minute drive from my house. The store also carries Calico Critters; this is where I bought Britney's Ballet Recital for my younger daughter. And apparently there is a basement area full of clothes and furniture for 18" dolls. I haven't even checked that out yet!

Not only did I find something for my dolls' kitchen floor, I got more time to look around the shop and realize how much it's going to get me into shopping trouble! Yes, the shop mostly caters to 1/4" scale miniatures. But those of us who create spaces for Playscale size dolls can't always be picky. I've since bought another sheet of plastic that looks like tile, for a backsplash for my kitchen, and two pieces of dollhouse carpeting. She also carries wallpaper, so I can get that too. She did have a few rolls that were in 1/6 scale, but they were too obviously made to go into a Barbie dollhouse for a little girl.

Plus, she carries miniature scaled fabric! They are sold in very small cuts, but then you probably don't need a full yard for a doll project very often. I bought myself some China silk. I've heard it's great for lining doll clothes, but I've never tried it. Seeing a small piece at a good price right in front of my eyes made it irresistible. I also bought a few more colors of mini scale rick-rack. She carries these in small bundles, and I bought a few different colors when I bought Britney the bunny. I picked up a few lighter summer colors this last trip.

According to this article, there are only 64 brick-and-mortar miniature stores nationwide! I feel very blessed to have one so close to where I live, and the area around the store is charming. As it's literally right by an active railroad track, as well as the home of the antique Grand Pacific Hotel, the shopping area is called Grand Pacific Junction, and there are some railway themed pieces here and there among this small group of stores, a couple of eateries, and a wedding chapel. It's mostly all connected by small paths, and all the buildings are rather quaint. There's a quilt store which carries fabric and also my current sewing machine and serger brand, so I could spend a lot more money there! I think now I'm going to have to take a trip this summer and take a bunch of pictures to show how delightful Grand Pacific Junction is.

And very soon I will put up pictures of my kitchen!
Posted by Barb the Evil Genius at 7:23 PM 1 comment: