Meg Checks Out the Beach and Hangs Out at the Park

I decided to have Meg's first photo shot at a local beachfront park. It didn't go as well as I wanted. The water was very choppy yesterday and the tide was high, so there wasn't much actual beach, at least where I was at. But I think just doing it, even if it didn't turn out perfectly, was enough for me to plan a next time.

Meg is wearing Barbie capris (on her, they are just jeans) and a top that I made for her. 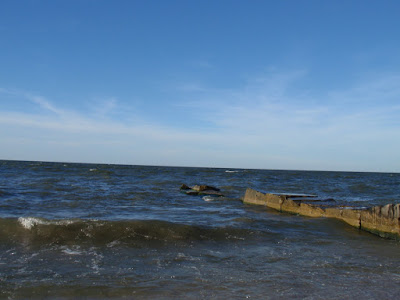 The park is named Veteran's Memorial Park, and so there are several memorial plaques for those who came from this little town, and died in service to their country.

Meg found a good place to perch behind a 105 Howitzer cannon that sits in the park. This is probably an original shell painted over. She also lets her feet dry off. 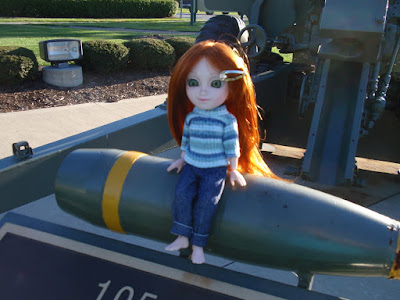 And my favorite shot of the day. Meg just looks so happy to be outside in this nice weather. 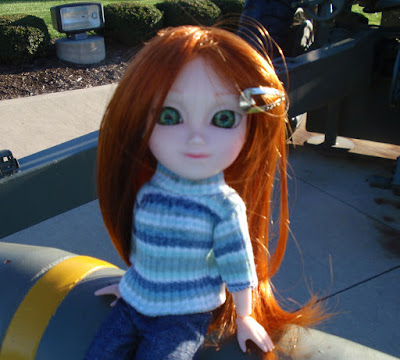 I liked being outside in the milder autumn weather too! Meg and I will be going out again. 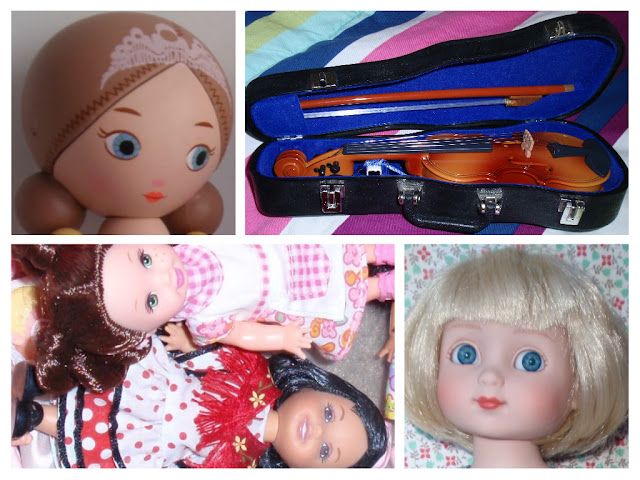 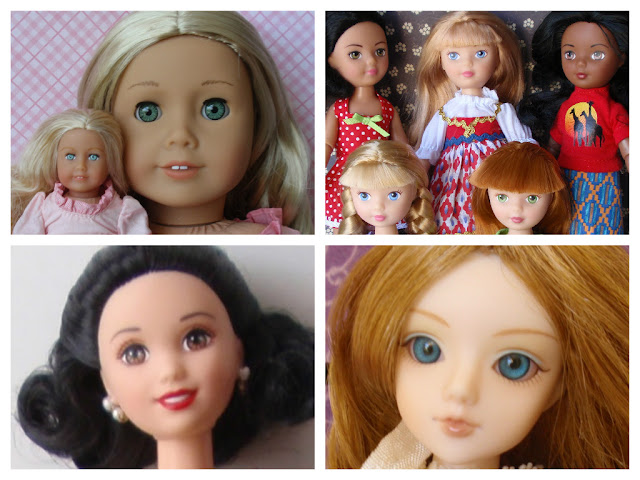 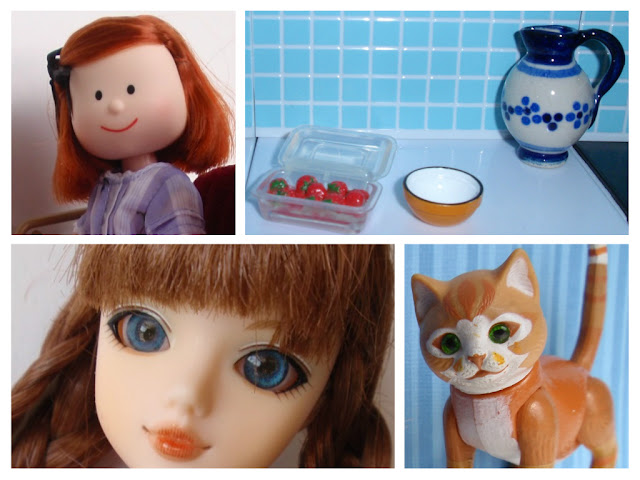 I'm terrible at remembering blogiversaries, but since Blogger shows you what number post you're about to write, it's easy to keep track of numbers. Since this is my 100th post, I decided to create collages of pictures from previous posts. I also have a small list of things I'd like to do as the blog moves forward.

1. Be creative! I want to sew doll clothes more often, but I also also want to try painting furniture, and even building a few kits that I have. (They're a secret!) Some disappointing results in the past, and fear of trying new things, have put me off painting and building. I'm ready to try again.

2. Get outside! Now that I have a travel doll, I'd like to get more outdoor shots, and also take her along to places that I visit.

3. Better pictures! I'm almost done clearing out my sewing area/doll display space (they're in the same room.) I still won't have a dedicated space to pose dolls for pictures, but I'm hoping I'll be able to set up backdrops without so much shuffling things around. I could also use some lights specifically for picture taking, but I don't see those in the budget anytime soon.

I'm thankful to all my readers/commenters for reading my posts! I hope that you will all stick around for the next 100!
Posted by Barb the Evil Genius at 12:51 PM 15 comments:

Honestly, when the Makie dolls were first debuted, they were ugly to me. I also had no desire for an alien, elf, or troll doll, which is what Makies looked like to me. Since then, the doll has gotten a new face mold, and I've seen a lot of pictures who looked more like Blythe or Pullip dolls: big heads, big eyes, a stylized look for certain, but also cute and human. Since each Makie doll is custom made on a 3-D printer, based on the look you design online, my doll didn't have to have pointy elf ears that stuck out, or an over-sized mouth. I could get something more aesthetically pleasing to me.

At the same time, recently I've been looking for a travel doll, one who would pose nicely on trips and outdoors, not too large, and also one who wouldn't demand a lot of furniture and clothes and room for herself indoors. (Do you know how demanding some dolls can be?) A Makie doll was on the possibilities list, but it was a post from Ghouliette at Dollsville, USA, that made me decide. Makie doll bodies are no longer 3-D printed, but instead are injection-molded plastic, which is sturdier and less expensive. So they were selling out the 3-D bodies, within the space of a couple of weeks. Even better, if I ordered in time, I could try a 3-D printed body for the new, lower price. I can always order a Makie on the new body, but I decided to give the 3-D body a try before they were gone. I designed my doll on the Makie website, and placed my order. I haven't been as excited to get a package in a while as when I got the FedEx envelope and realized that it was holding a tube, and that my Makie doll must be inside. So now, meet Meg.
More pictures, include nekkid dolly ones, below the fold.

At Long Last, the Liebster Award

Presto tagged me for this award ages ago, and I feel guilty, because I've had blogger's block lately. I also have no idea who to tag for this. Eleven people is a lot to tag, and most of the bloggers I know have already been tagged for this. So I'm going to answer the questions, finally, and let it go. :)

1. What kinds of toys got you into collecting and customizing?
Barbie got me into collecting, when I started buying them as an adult. I don't really do customizing, yet. I'm actually seriously considering passing off painting to my youngest daughter. She does a fantastic job painting miniatures for Pathfinder games, so I think she'd be a natural. I do have a Belle doll that has had part of her lip paint rub off; I keep meaning to make this my daughter's first doll project. :)

2. What's the coolest way you've repurposed something to work on/with one of your projects?
Oh dear. I haven't really done this, either. At least, not as an adult. As a kid, I had the Sunshine Family dolls, and they were all about making sofas out of milk cartons and dressers out of matchboxes. I've turned bookcases and shelves into diorama roomboxes as an adult, but lots of people do that.

3. Sonic or Mario?
Mario! Although my daughters regularly smoke me at MarioKart.

4. What do you do to find inspiration?
Since my doll projects involve sewing, I look at all kinds of clothes, from historic to modern, for real people and for dolls. My Pinterest account is mostly dedicated to clothes for inspiration.

5. What time period would you most like to live in, other than the modern one?
The turn of last century. There were still beautiful, elaborate clothes, but things I like having, like indoor plumbing, were also becoming more common.

6. When has a project just made you give up? Why?
As far as sewing projects, I've given things up when I try to create a pattern for something over and over, but can't get it to look the way I want. I've also tried knitting a blanket for a doll bed, and given up on that three times. One was when the pattern wasn't written correctly, and it took me several tries to realize the pattern was wrong, and not me. By that time, I was sick of the whole thing. One was a lacy blanket that was enjoyable to work on, but every time I made a mistake, I couldn't figure out which row was which when I unraveled. Lastly, I tried a pattern where I just couldn't get past the first few rows without making a mistake. I'm using the wrong yarn or something, at least for me, I think.

7. What's the most versatile tool in your arsenal?
Well, my sewing machine, definitely. But when I have to do hand sewing, my best go-to item is not a tool, but a book. 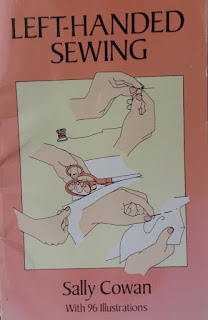 Not only are there all kinds of stitches in there, but the directions are just right for me!

8. When has a project surpassed your wildest expectations? How?
I don't know that I will ever make anything that surpasses my wildest expectations. I'm a perfectionist, which means I can always look at something and say, "I could have done that better." I'll show you a picture I made for a contest, where I wanted 16" Gene to look like she came from 1907. I ended up happy with this one, because I thought the silhouette and general style were pretty much 1907. I drafted the pattern and made everything myself, including the hat. 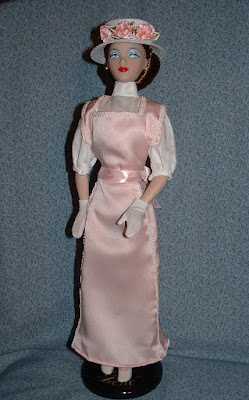 9. What's your all-time favorite movie?
The Wizard of Oz. And somehow, doll manufacturers do seem to come up with some unique takes on the movie costumes, now and then.

11. If you could live in a fictional universe, which one would you pick?
Does Narnia count? I mean, Earth-as-we-know-it is part of that universe, but Narnia is its own place.

If for some reason I missed you being tagged, and you want to play, email me and I will give you eleven questions!