The previous spa doll was all about pampering. This Barbie is a fitness doll. She has bendable elbows, wrists and knees. I think she has the Bambi face mold, and different looks from the spa girl. 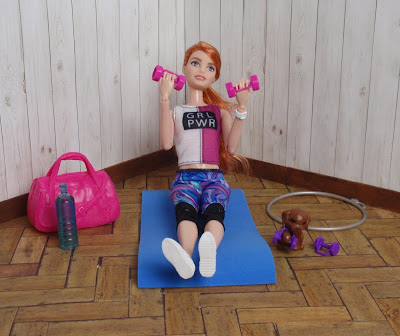 She comes with her outfit, two pink weights, two purple weights, a water bottle, a gym bag, a hoop, and the exercise mat. I'm not quite sure why the hoop was included. I know they're used for gymnastics, but gymnastics doesn't seem to be the theme here. The blue mat is just a thin piece of foam. It scratches easily and attracts little pieces of hair and dust like crazy. It came rolled up in a plastic clip, so it will take some time for it to lie flat. Fortunately, foam sheets are fairly inexpensive at the craft store, so the mat is super replaceable, or you can acquire more mats if you want to start a Barbie exercise class. :)

It's cute that the puppy is joining Barbie in her workout routine. 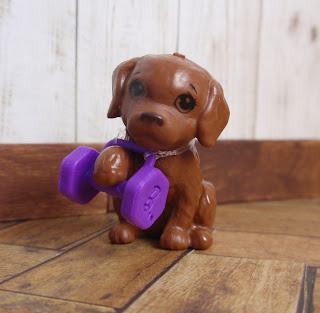 The gym bag is made of thin plastic. If you push the two sides together at the top, the bag opens up enough that you can put the weights and water bottle in. 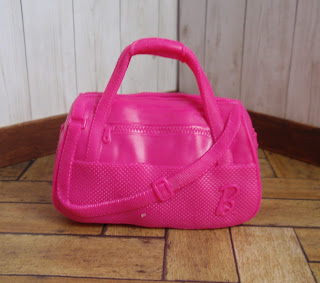 The shoes have nice detail. 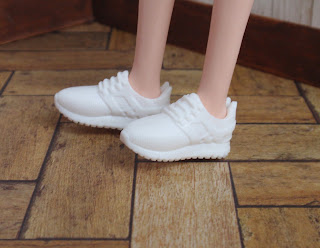 I think this doll is very pretty for a playline doll. She has at least two color tones in her red hair, and eyes of a nice shade of gray. 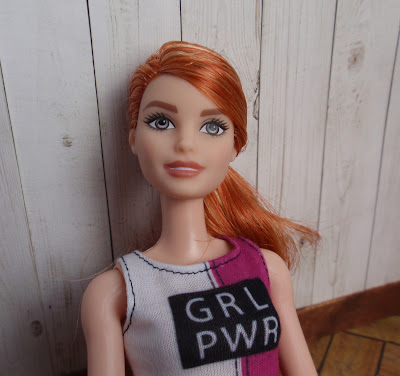 And now some more shots of the new light stand that I bought. It stands on a fairly sturdy tripod, and it has two places where the post can be extended or reduced to make the light taller or shorter. I haven't checked how high the light will go, but well over six feet, so I think it will be fine for all of my photography needs. 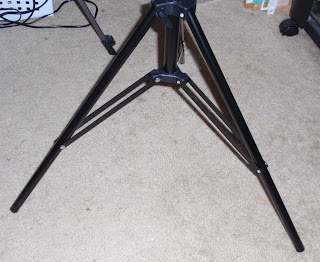 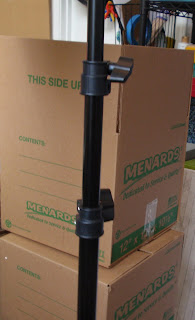 The actual light source consists of a curly lightbulb inside of a rectangular umbrella type frame. Then there is a white piece of diffuser fabric that attaches to the frame with Velcro. The frame measures 20"x27" (50.8cm x 68.58cm.) Neither Mr. BTEG nor I could find a way to turn the rectangle so the long side was at the bottom. I have to take care when I rotate the frame up or down, to make sure the frame's weight stays balanced. 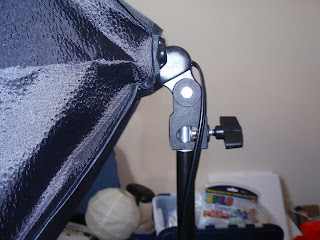 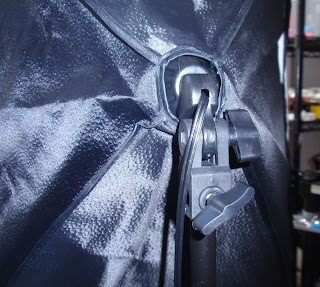 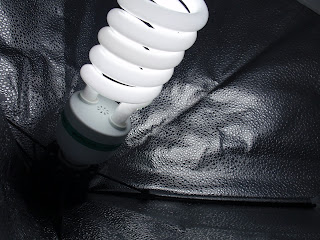 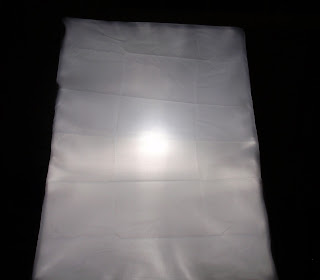 This light stand wasn't as expensive as I thought it would be, so I'm glad I invested in something a little bit better to help my photography.

I mentioned that I had ordered a standing photography light with a diffuser, and it finally arrived. I decided to take pictures of the new Barbies I bought. They're home spa-themed, which is pretty serendipitous for Mattel right now, especially since a lot of the other dolls that were in line to be released this year are movie dolls. I haven't seen anything official as to what Mattel plans to do with those dolls, since the movies they're based on have been postponed. I presume stores that are still open are going to want some sort of merchandise for their shelves, and then Mattel also has fulfillment contracts, so who knows?

Anyway, on to better subjects. I only had time to get a shot of one of the new doll sets, and I'm also including a picture of my new light. I need to do some more tidying in my area of the craft room, but I really, really, really wanted to try out my new lighting capabilities. This new doll does not count towards my collection count, since I honestly only bought this doll as a body donor. :) I thought you might like to see her and her accessories, though. 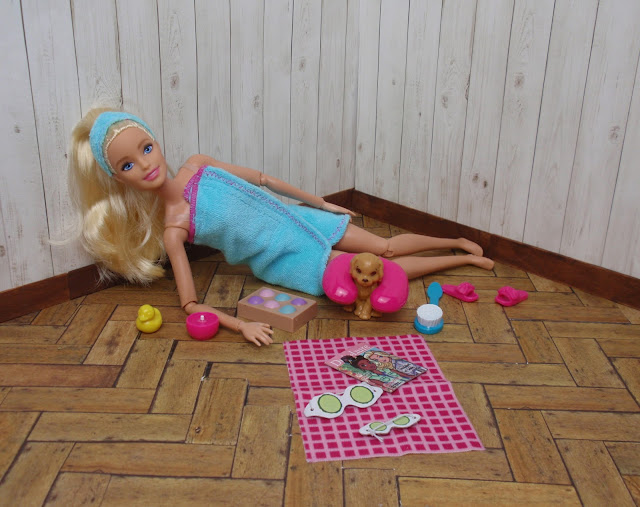 She came with the wrap around towel, the headband, a "rubber" duck, a faux candle, the puppy, neck pillow, a bath brush, slippers, faux cucumber eye masks for her and puppy, a faux magazine which is merely a piece of cardboard, only printed on one side, the mat, and that box with six colored spheres. I'm guessing those are supposed to represent colored bath bombs. There's another doll set that includes a bathtub, which I don't plan on buying.

And then here is the light. I have a lot to learn about what angles will work best to eliminate shadows, but I really needed a better light source, so here it is. 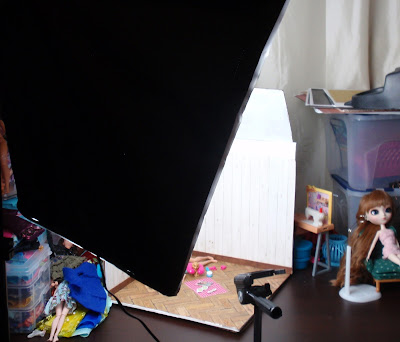 Once I get my craft area in better shape, I'm planning on photographing the other spa doll I bought, and maybe some skin tone comparisons, if anyone else thinks these dolls would make good body donors for a doll in their collection.
Posted by Barb the Evil Genius at 11:28 PM 14 comments:

I plan to intersperse collection photos with other blog posts, but these photos were easy to take, so I decided they would come next. I have a human-sized photography light on order, but it's being held up due to current virus issues.

Samantha is an original Pleasant Company doll, but she wasn't made in Germany, like the very earliest AG dolls were. Caroline is a Mattel doll. I have taken some detailed comparison pictures for people like Farrah, who were interested in the little differences between the Pleasant Company and Mattel dolls, but I'll put those at the end. If you're not interested in the minutiae, you don't need to read that far.

Quick historical note, Pleasant Company was started to help girls learn American history. I remember reading that the books were actually supposed to be the focus of the collection, and the dolls and accessories were additions, to help girls "act out" the scenes from the books. There were even girl-sized outfits that matched Pleasant Company doll clothes, for further immersion. 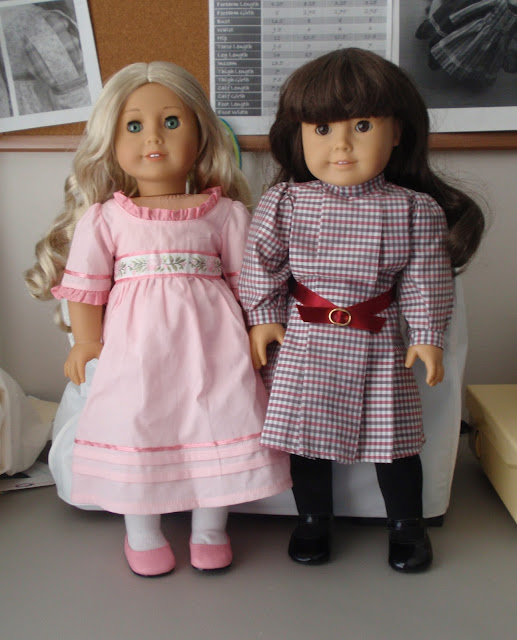 Samantha was released in the 80s, but I think I received Samantha for Christmas from Mr. BTEG in 1997. Eldest got her Bitty Baby (by Pleasant Company) for Christmas that year, though, so it's possible that I might have gotten mine the year before and started getting Pleasant Company catalogs then. I bought Caroline in 2015 when it was announced that she and her collection were going to be retired. Something about her had appealed to me ever since she was released, but her being retired made me finally buy her. Most of you are probably pretty familiar with this type of 18" doll, since there are so many other similar dolls that have been produced. American Girls have stuffed, cloth bodies, as you can see by looking at Caroline's neckline. In general, Pleasant Company dolls have more stuffing than more current releases. 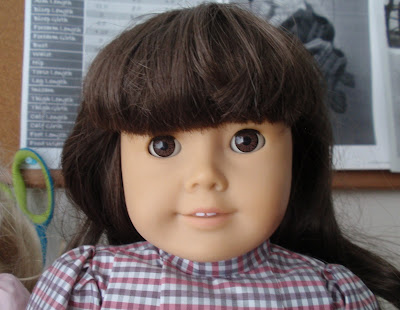 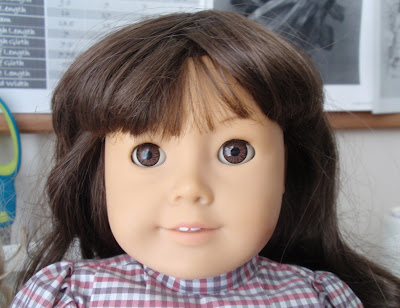 A closeup of Samantha. I wish that if she had to have bangs, they wouldn't have been so long and thick. I've included a shot of her with her bangs somewhat pushed aside, so you can see part of her eyebrows. 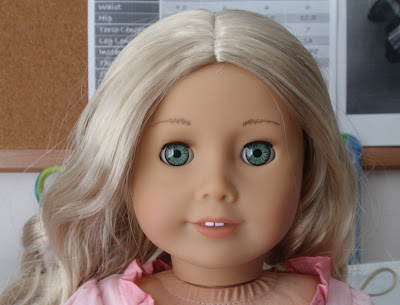 And Caroline. She has slightly less of the whites of her eyes visible, which I think makes the biggest difference in their expressions? 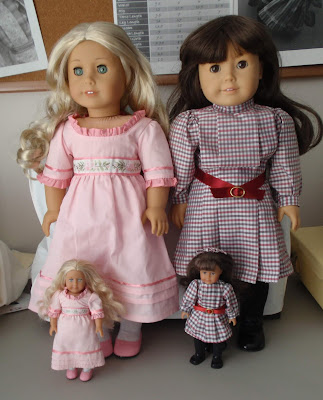 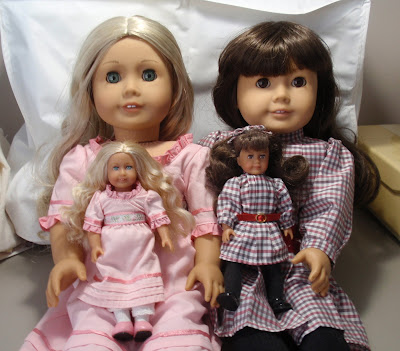 I had to take a few pictures of the girls with their mini-versions, especially since I just featured the minis in my last post. Originally, Samantha did have a matching hair ribbon in her hair, but it was sewn in, and at one time I dressed Samantha in a different dress, so I had to remove the original ribbon. If I sewed the ribbon onto a bobby pin or narrow hair clip, Samantha could wear it again. Just one more thing on a long list. :) 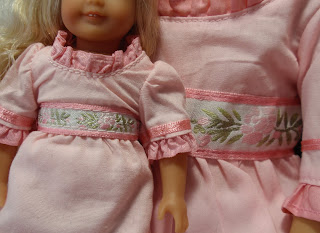 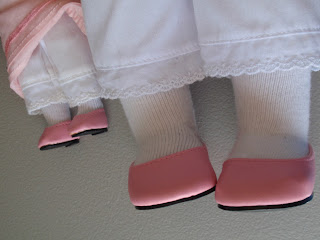 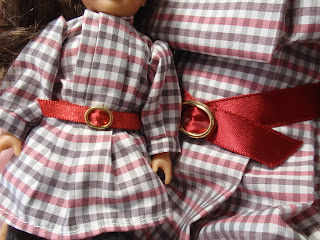 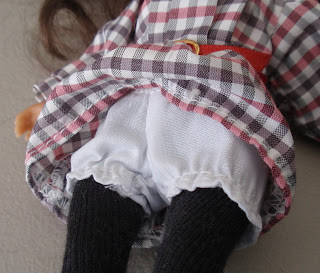 As you can see, the two doll sizes are *very* similar in their outfits. My 18" Samantha came wearing drawers like I show on mini Samantha, but the elastic is shot in those, so 18" Samantha just wears her tights. Of course, the real Samantha wouldn't have been wearing tights, but I forgive Pleasant Company this, as knee stockings might have gotten loose at the top pretty quickly. Period garters would have added a lot of expense, and difficulty dressing the doll. Not to mention, the garters would have been attached to a stiffened sort of sleeveless undershirt with shoulder straps, like a corset, but unboned. That would make for more expense, plus American Girl dolls did not give completely accurate attention to undergarments, which is acceptable for me. The American Girl doll Felicity doll did have ribbon garters to tie her stockings around her knees, but those are far more simple.

I love having both of these dolls in my collection. I have some of Samantha's accessories and furniture, but nothing of Caroline's. Someday I would like to find Caroline's accessories second-hand. Her straw bonnet is the only thing I think that I would have a hard time making myself.

Now let's get to where these two dolls are the most different: their eyes and eyelashes. Honestly, they aren't even that different here, at least on my pair. People enjoy comparing dolls from different eras, though, so here are some pics. 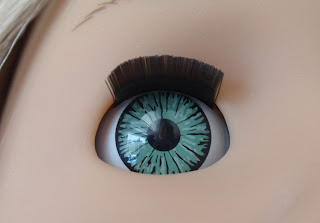 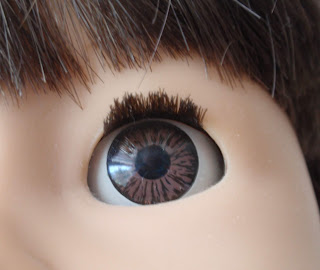 Samantha's eyelashes are obviously sparser and rougher looking. Neither doll has ever been played with by a child, so I think that makes for a pretty even comparison. I'm not aware of my Samantha ever losing any eyelashes. The iris decal looks about the same for both girls, which was probably a wise choice by Mattel. No point in differentiating these dolls from earlier ones in more ways than necessary. 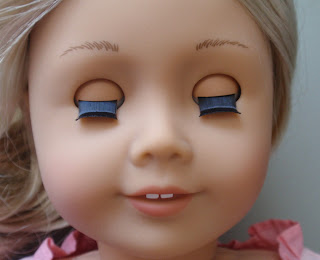 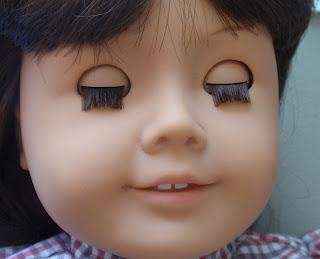 One last very small difference, and that is in their teeth. 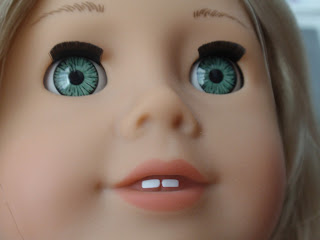 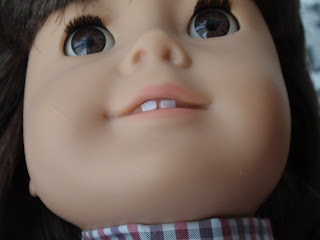 Samantha's teeth are painted further up underneath her lip. Her eyes and teeth are not as white as Caroline's, but that could be partially due to aging. Samantha is over twenty years old!