Checking Out for a Few Days

Hello, readers! I just got my photography set-up that I ordered, but it'll be a few days before I can play with it. My sister-in-law just had surgery today on a badly broken ankle, and I'm going to spend a few days with her. I'll be reading everyone's blogs, but I might not be commenting. Is anyone making any dolly plans for Halloween?
Posted by Barb the Evil Genius at 8:55 PM 4 comments:

My dolly time has been off and on lately. Not only that, but I'm working on projects which are taking me a while to complete. One of those projects is painting the accessories for one of the latest Ever After High dolls, Birthday Ball Blondie Lockes. I was going to put these pictures up after I finished changing up the accessories, but I've decided to make the doll her own post, and the painting one another. I need to blog more! Besides, there several things I wanted to mention just about the doll.

This doll was part of a release of three, Blondie: blue, Cupid: pink, and Duchess: purple. Target had two exclusive Birthday Ball dolls, Rosabella: yellow and Cedar: orange. Those dolls were scented, and were clearanced out at Target just before the three newer dolls came out. Blondie, Cupid and Duchess have simpler dresses, no scent, and no tinsel in their hair, unlike the two exclusive Target dolls. These three also seem to be sold only in TRU. If there's going to be an online story about these dolls, we haven't gotten it yet. We don't even know whose birthday is being celebrated.

Normally, Blondie Lockes has blond hair, but for this series, all the dolls have unusually colored hair, and Blondie's is blue. She is articulated, and comes with a headband, collar necklace, and "birthday present" purse. No earrings, no bracelet, no ring, and no stand. I used a spare stand to pose her nicely for pictures. 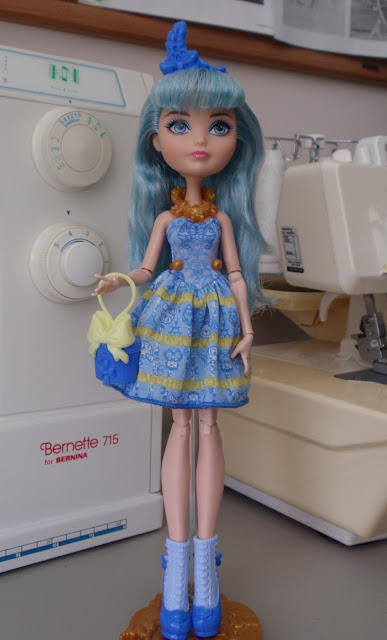 Her face is nice, and her bangs are not gelled overly scrunchy. When she wears the necklace, it hides the fact that the neckline of her dress is off. 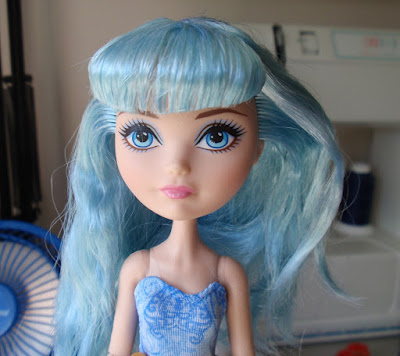 Her hair is fairly thickly rooted. There's a baldish spot where her headband goes, but it's not too bad, and her scalp is painted blue to help cover that up. 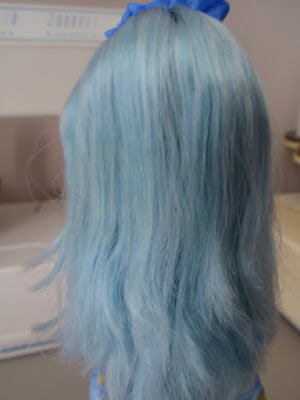 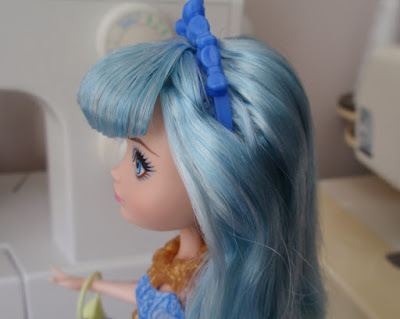 She has holes marked where she would have earrings. This will make it easier for me to give her earrings, which I will probably do at some point. I've been collecting loose stock from various Ever After High dolls on eBay, but I don't have anything I want to give Blondie, yet. 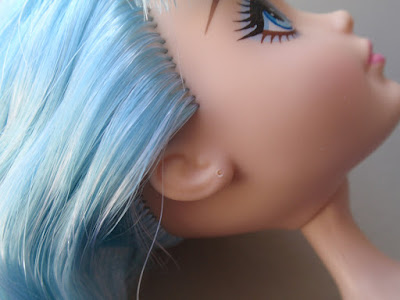 She has the standard dots on her lower lip, intended to enhance her looks, I guess. Not all the more basic dolls have these dots. My Book Party Ginger Breadhouse, for example, does not. 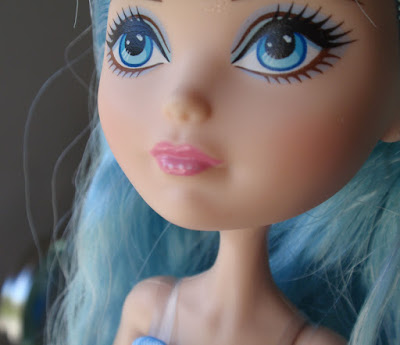 It wasn't until I had Blondie near a window and direct sunlight, that I noticed that she has some kind of gold glitter across her forehead, above her eyebrows. I'm not sure if this was meant, or if it's some glue residue from gelling her bangs? I do plan to get Cupid, and possibly Duchess, from this series. If I do, I'll check out the foreheads. 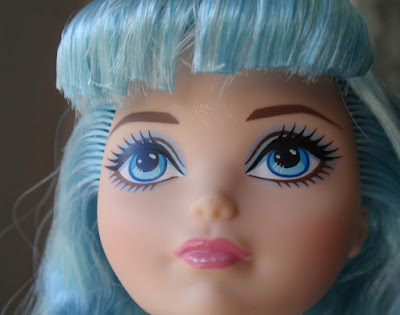 This doll retails for $14.99, although she already is selling for less on Amazon. That's not bad, for a doll that is still workable; she has good face paint, an articulated body, and decent hair. The blue hair also makes for a unique doll to add to a collection, even if you have other Blondies.

So in case you're wondering what painting I'm doing: I'm painting the bows and ribbon down the front of Blondie's purse a light blue. I'm painting the feather in her hairband a pale yellow. There are "pearls" in front of the feather that are also going to be light blue. And in the marketing pictures for Blondie, the ribbon in the middle of her bows, on her headband, was gold. I tried it and it looks nice, so I'm going with that. I'm torn on whether or not to do anything to her necklace or shoes. I might paint the bows on her necklace a blue something like the color of her purse now. And I was thinking about yellow for the rosettes on the front of her shoes. Maybe!
Posted by Barb the Evil Genius at 4:35 PM 11 comments: