Kripplebush Kids are 8" dolls that were created by Robert Tonner in the 1990s. They have hard plastic bodies and heads, are strung, and have sleep eyes. Some of the dolls produced wore modern little girl clothes, but the ones in my collection all came wearing antique fashions. 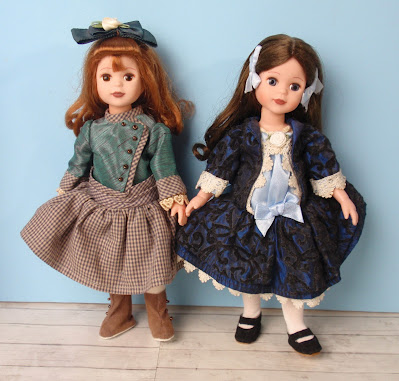 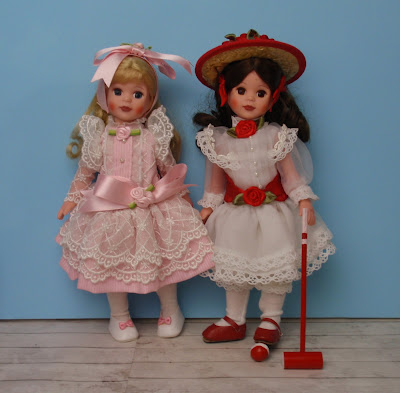 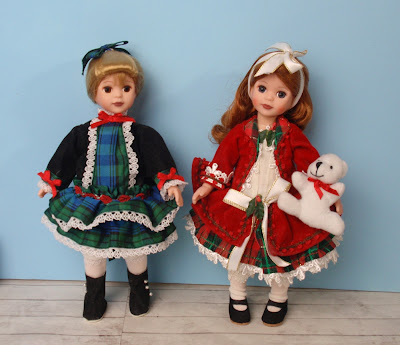 I don't know why that middle picture turned out darker. I tried taking pictures again, and they were still dark. I had problems getting this photo shoot together, so after two tries I just want to get this post up. First I forgot my mini SD card downstairs. Then I had to find my mini SD card somewhere on my desk. Then I realized that I had another Kid tucked away in a drawer (the one with the hat and croquet mallet and ball.) Then I realized that she had accessories, and had to remember where I put them. Fortunately for me, I remembered that all my Kids' accessories and extra clothes were put away neatly in this Ginny wardrobe. I kept dropping things (that's a part of every photo shoot, to be honest.) Argh. 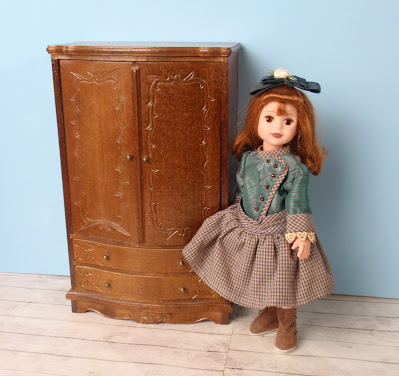 Here is a Kid with some of my similar size dolls for comparison: Eden Madeline, Madame Alexander Travel Friends Ireland, and mini American Girl Samantha. 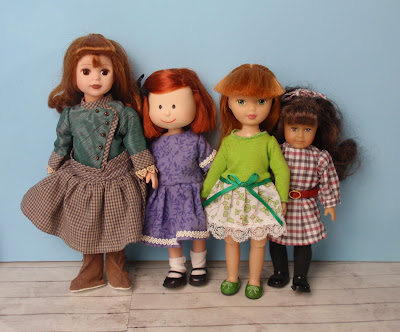 Speaking of Madame Alexander, I see a resemblance between these dolls and the ubiquitous Madame Alexander 8" dolls. I don't know the story behind the creation of the Kripplebush Kids at all, though. There were some Kids dolls that were pictured in a Tonner catalog and never produced. The Kripplebush Kids body was supposedly later used for the bratty child star Merli Stimple character in the Gowns by Anne Harper 16" doll collection by Tonner. However, Merli appears all vinyl, with a new face mold and painted on eyes.

Lastly, since one of the dolls above has that really cute croquet mallet and ball as accessories, I though this was as good a place as any to show a picture of my treasured 1/4 scale Ashton Drake croquet set for the Gene Marshall collection. It featured in a story about Gene playing croquet with some of the Hollywood set and talked about her grandfather Gene teaching her to play croquet (if I remember correctly.) Since croquet was so popular in the mid-1800s into the early 1900s, someday I want to dress some of my 16" dolls in antique gowns (maybe 1860s) and pose them playing a game. Of course, I should get some male dolls to play as well, since part of the popularity of croquet way back when, I have read, was the chance to mingle with the opposite sex. When has that not been popular? 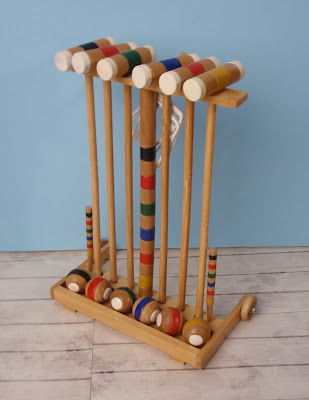 Sydney contemplates how to challenge the handsome young Lord Dawlish. And how to win the croquet game as well. 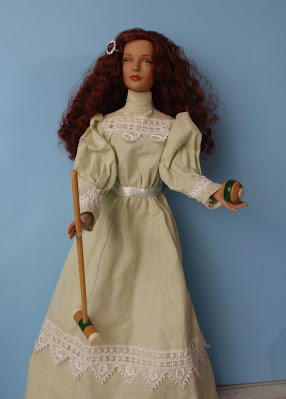 The BTEG family is going to a restaurant for Thanksgiving. If I don't get any kind of Thanksgiving doll diorama up, I will at least be taking a doll to the restaurant, I think.

Posted by Barb the Evil Genius at 9:30 PM