If you looked at the pictures that I took at the doll show I attended, you'll notice that there were lots of antique dolls, from the 1860s into the early 1900s. If you want to sew them new clothes, there's nothing better to use as a reference than antique items like the Delineator magazine. 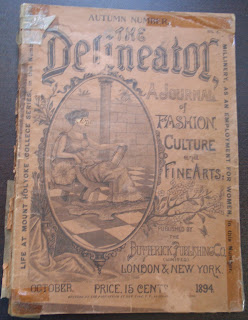 The Delineator was a publication created by the Butterick Publishing Co., to highlight its sewing patterns. Unlike the magazines or catalogs that you see in stores that carry sewing patterns today, however, The Delineator gave detailed descriptions of fabrics and trims that you could use to make up the patterns, which are a boon to the sewer of today who wants to learn about authentic historic sewing. There was also a serial story, articles on subjects of interest to the women of the time, and some patterns for needle arts items. 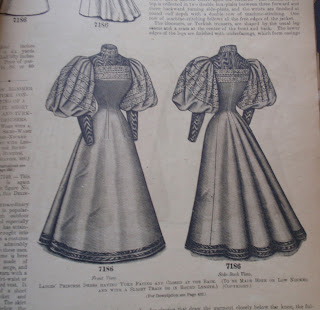 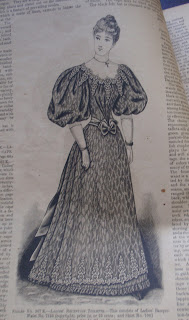 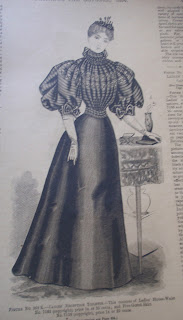 For misses and girls: 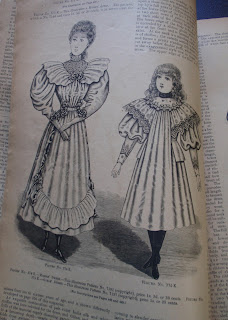 Among the crafting patterns were these for a crocheted wheel and "mould-crochet" edging. 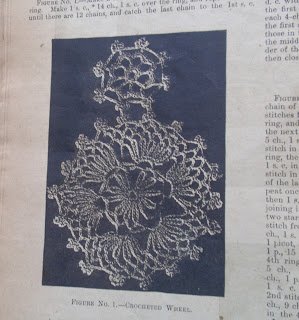 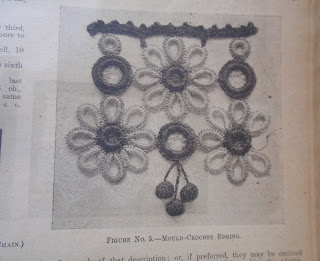 The magazine that I found at the doll show was the October 1894 edition. I was afraid I already owned it, but I didn't want to take a chance of missing out if I didn't, so I bought it. Turns out that I do own the Thanksgiving 1894 edition, but I'm fine with that. I did get the seller to take $5 off the price, and I'm glad that I did. I don't know if he didn't know better or what, but he implied that there were doll patterns in the book. There aren't, which I already knew, fortunately for me. There are drawings of people wearing items you could make up with their sewing patterns, but no actual pattern pieces are pictured. I couldn't even find anything about dolls in the magazine, in the quick glance that I gave through the index. Maybe the seller was confused by the images of patterns for girls. I'm interested in fashion in this era for its own sake, so I do own some antique fashion magazines and photos. I'm going to have to make up a list of which issues I do own, so I don't take a chance on double buying again.

While this Delineator is in great shape (considering it's over 125 years old!) I am wondering if I should carefully take the magazine apart so it can be scanned. The binding is already worn out around the bottom of the magazine, and any looks I take throughout will just loosen the binding more. On the other hand, is it okay to take apart a genuine antique piece of ephemera (something made of paper that was meant to be discarded but is now a collectible)?

There were also a lot of antique photos. Many of them were of little girls with their dolls, which was not surprising, but again, there were ones as well simply of people wearing the fashions of the times. Most of the antique photographs (or tintypes, daguerreotypes, or whatever) were too expensive for me, but I did get the collage photo below for $5, framed. 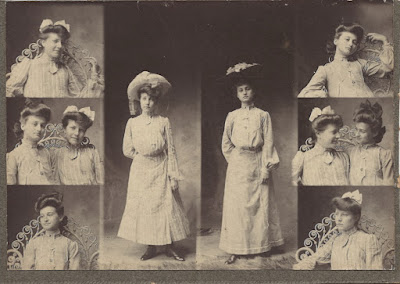 Although this could be two sisters, I get the sense it was two friends at the photography studio together. When I took it out of the frame to scan it, I was irked to see that the cardboard backing had been cut up so the photo could be put into a smaller frame. I'm putting this print at about 1902-1903, and I'm guessing the girl standing on the right is a year or so older, judging by the length of their skirts.

Is there another era in time that you think your dolls should represent? Did you or have you thought about collecting books, paintings, photos or other vintage and antique items to learn more about your chosen time period?

Posted by Barb the Evil Genius at 3:52 PM