I've once again gone through one of those phases where I'm either too busy or don't have the energy to create a new post. However, yesterday I finally got to attend a real, live, in-person doll show after a very long dry spell! I took all of you with me too, at least in spirit. I found reminders of many doll bloggers yesterday; I'll be sharing them with the pictures. Pictures will be in order by time taken. I was attracted to this Snow White doll, and the Lenci doll reminded me of Tam. 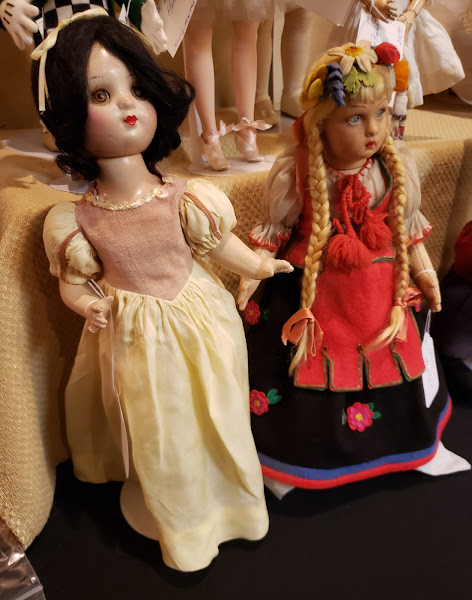 So did this Lenci. I think the doll in the blue dress behind her is darling, but my budget did not run to antique dolls that day. 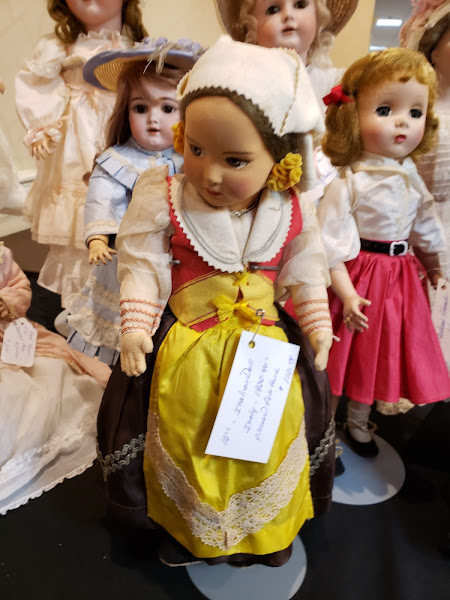 I've seen this Kestner Gibson Girl doll before, but I don't think I've ever seen one in person. She's in a book I have about sewing Victorian doll clothes, which I am proud to own. 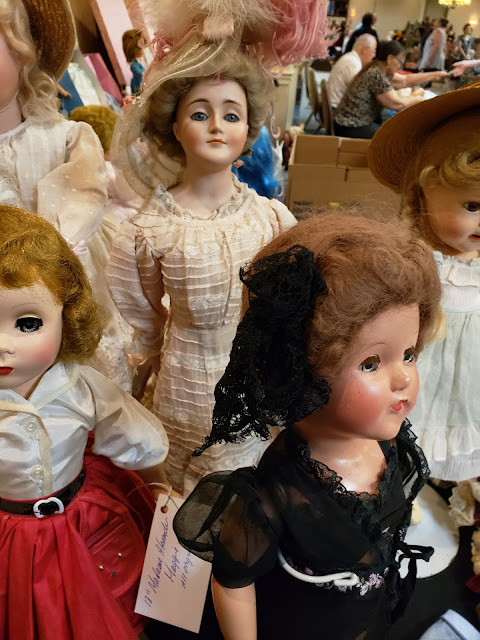 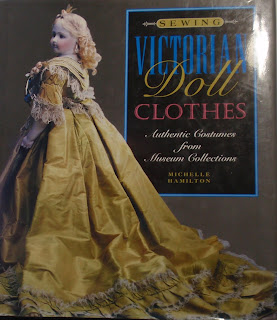 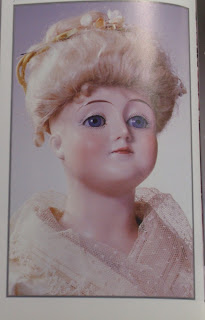 I thought of Linda and Serenata when I saw this Sasha doll. There ended up being a lot more Sashas that I didn't get a photo of, as well as some Gregors. The Nancy Ann doll made me think of Tam. A lot of dolls made me think of her, perhaps because she has such a broad collection and doll interests. The little Betsy McCall is also cute. 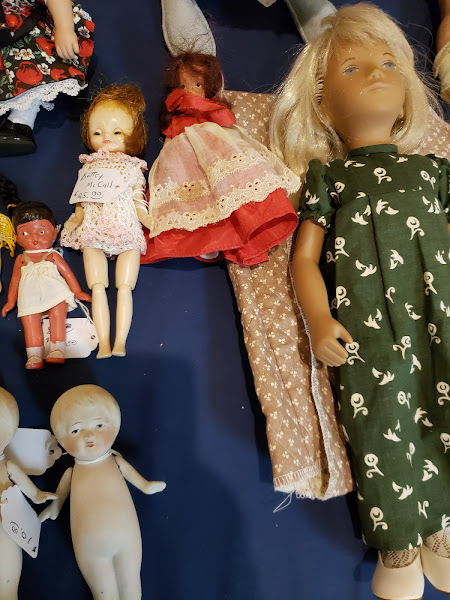 I needn't have worried about getting that Nancy Ann doll into the picture. There were lots of them as I went on. 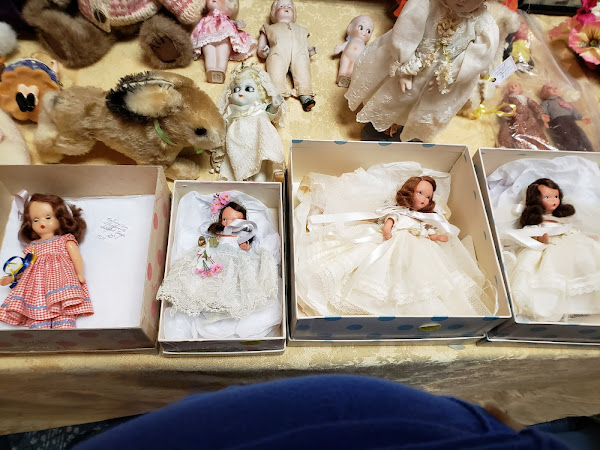 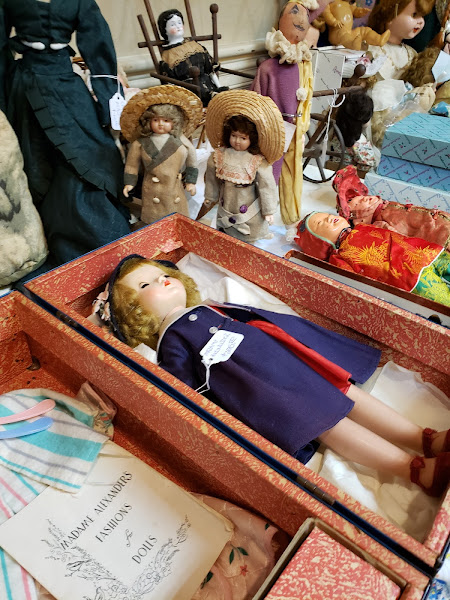 Many doll bloggers I know are into the vintage Barbies. You can see some Tammy dolls too. I thought of Teresa because of the many vintage Barbie clothes she has. There was quite an assortment of vintage Barbie, friends and family clothes, shoes, jewelry and accessories at the show. I bought one vintage piece, but that won't get shown until a later post. 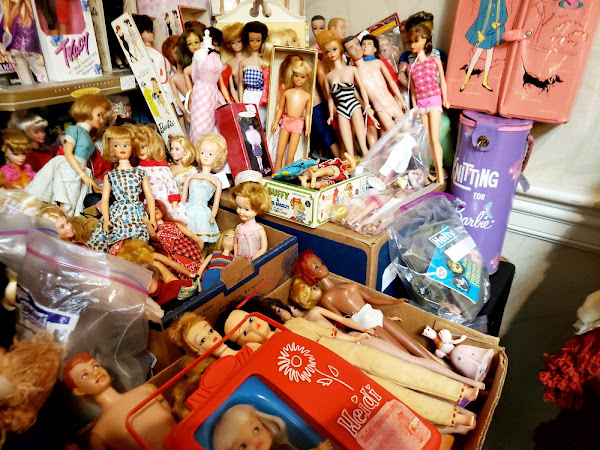 While we're on the subject of Barbie dolls, there were some more modern Barbies, but nothing that thrilled me. I saw an unboxed Swan Queen doll that made me think of coffeeanddollspl. 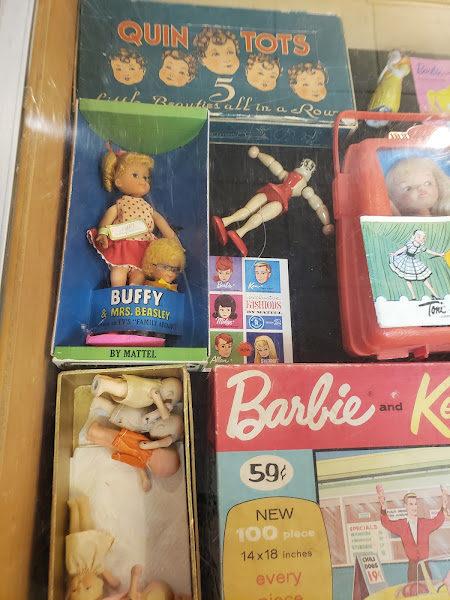 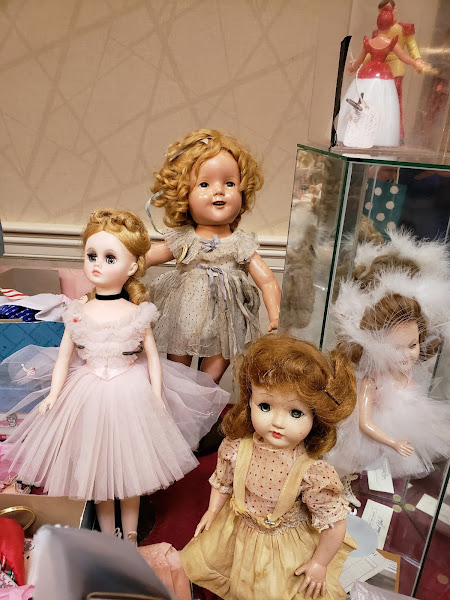 I wonder if this little Japanese doll would have gone home with RagingMoon1987 if she had been there with me. The doll would surely receive lots of love from her! 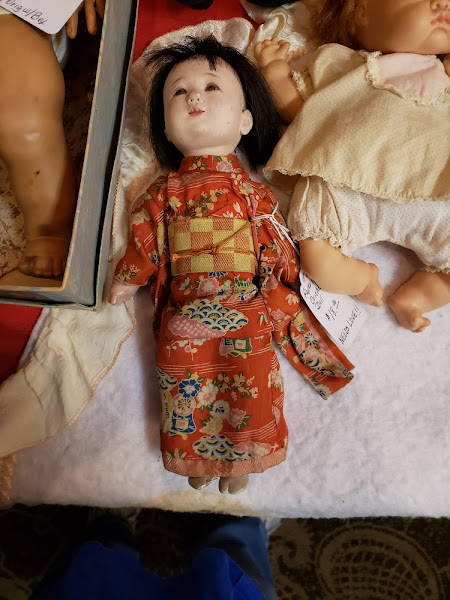 Here's another Shirley Temple with clothes and a case. 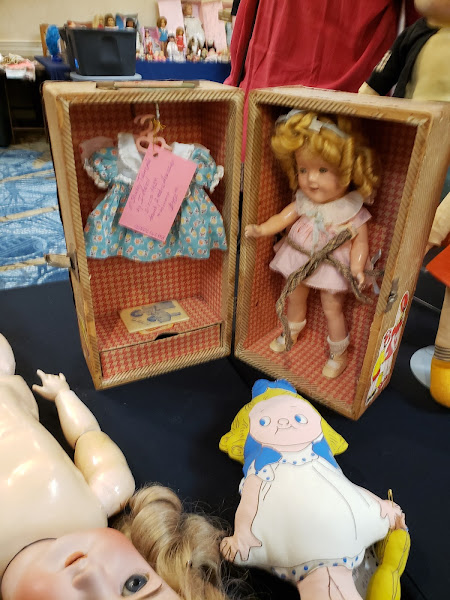 Here's yet another Shirley Temple, a dark-skinned Patsy that brought to mind Dorothy in PA yet again, and an All-American version of the Schoenhut doll like Serenata's world-famous Peggy Sue (and friends.) 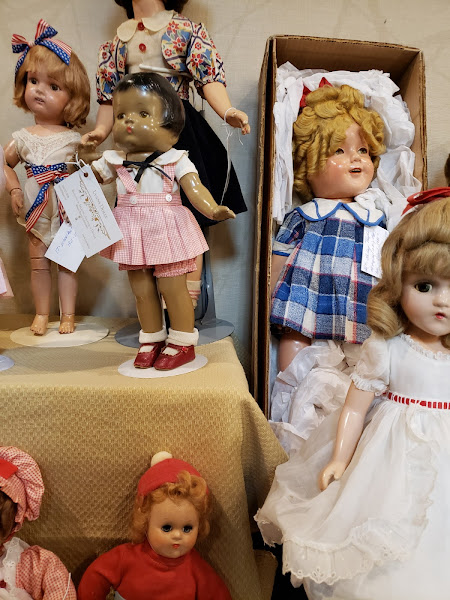 And last but not least, this Cissy bride who stood regally near the front entrance, welcoming us to this dolly wonderland. There were a few modern Cissy dolls too, but the vintage ones have their own quiet majesty. I'm sure Sandi would agree. 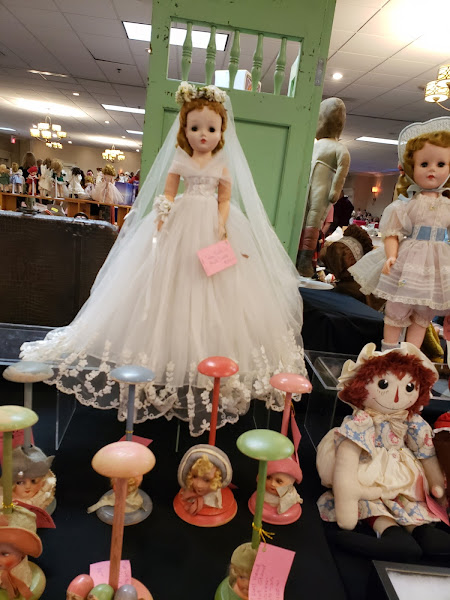 Although there weren't a lot of modern dolls, don't worry, MC, you are not being left out. I bought a stack of doll magazines and in one there was an article on Spanish cloth dolls produced in the 1920s-1930s, bringing Spain doll companies into competition with other European countries at the time.

I think next time will be a review of my doll show haul, because boy, did I bring home a haul. Having all those dolls right in front of me and just being able to pick one up and hand over cash to make it your own was absolutely intoxicating. Well, my purchases were mostly clothes and accessories, because there were lots of those too. I hope you got some enjoyment out of virtually attending a doll show with me.