Yes, Felicity finally arrived. I'm not going to do a thorough review, just some remarks. 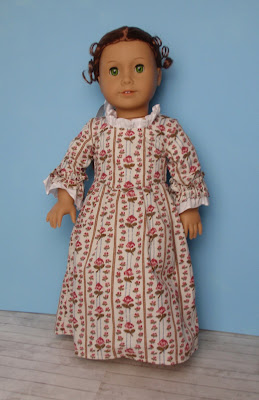 I saw complaints online about re-created Felicity's hair and her pin curls. She certainly does look... odd. Her hair should should not be pulled so far back; it should be covering her ears. I'm afraid her hair is done the way it is because she does not have as much hair as original Felicity did, but I'm going to try to adjust her hair anyway.

Her shoes are single-lasted, which means they are made to fit either foot. This enabled the shoes to be traded off between feet so the shoes wore more evenly and could be worn for longer. She also wears a shift and the thick stockings that you see. In real life, they would be wool. They do feel soft and woolly. 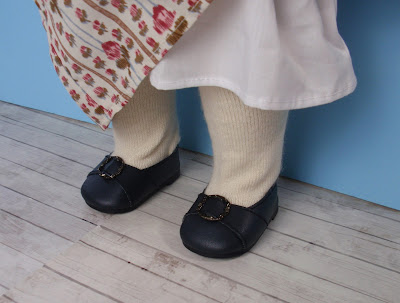 Her accessories included:  her garter ribbons to tie to the tops of her stockings 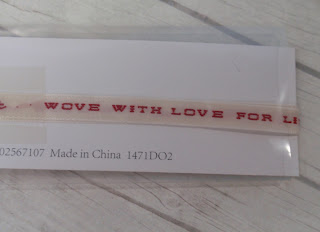 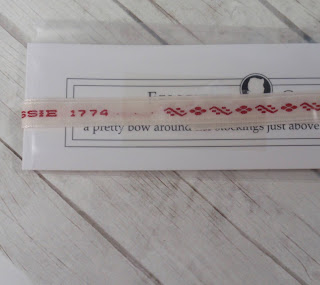 a brocade purse, handkerchief and coin called a bit 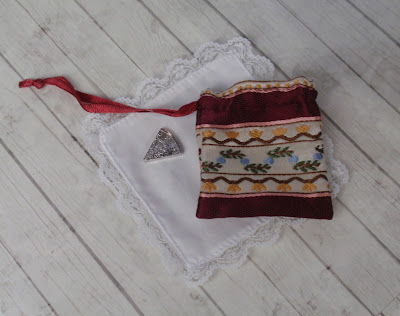 and her round cap and coral necklace. Felicity looks a bit better wearing her cap. Her coral necklace was supposed to be for "good luck." I remember reading about children all the way into the 1860s wearing bead necklaces whose stones were supposed to afford certain gifts to the wearer. Unfortunately, I can't find anything specific right now. I'm guessing the practice was at least due in part to a much higher rate of child mortality. 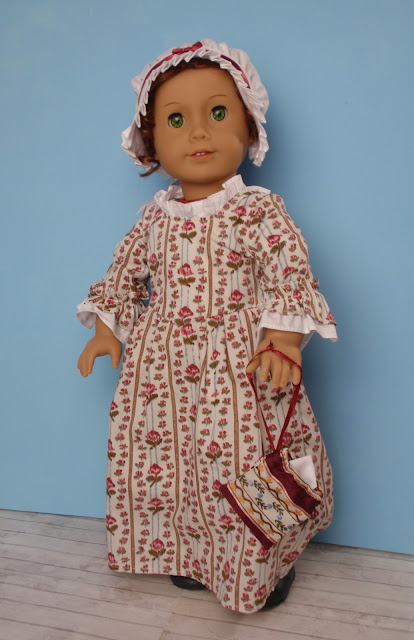 A little card was also included to explain the origin of Felicity's coin and why it was called a bit. I think I recall bits coming from Spanish doubloons, but maybe dollares were also called doubloons? 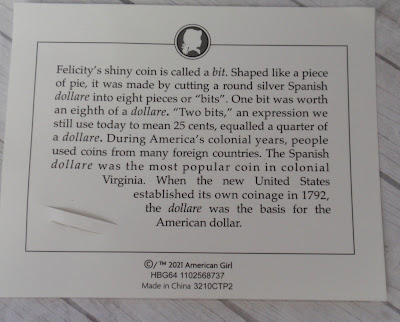 I was in grade school in 1976, the year that America celebrated the two hundredth anniversary of its founding. That year, our school picture had us holding a small replica of the Liberty Bell, and sometime around 1976, my class at school also made horn books, used by children for centuries to learn to write their alphabet, among other things. Felicity learns from a horn book in her second story, and Pleasant Company had one for sale for her doll. That interest in the Colonial Era from my childhood may be why I have always found history in Colonial America interesting, although not my favorite era. I'm glad to add Felicity to my collection, and wearing what I think is the most historically accurate "meet" outfit.

While looking up photos of vintage Felicity's hairstyle, I read something interesting. Apparently, Felicity was the first doll that Pleasant Rowland got the inspiration to create, after a visit to Colonial Williamsburg in Virginia. However, Goetz, the company she went to for her doll making, was only making dolls with bangs at the time, and Felicity would absolutely have not worn bangs. So Rowland created some other dolls first, including Samantha. Bangs were not popular anymore during Samantha's era, but it was conceivable that she would have had them, at least.

I have a big project that I'm working on little by little, which is where my time has been going. I'll only tell you that it involves a trip to IKEA. :)

Posted by Barb the Evil Genius at 3:43 PM