A New Resident -- Who Is Not a Doll

Chris at My Barbie's Closet recently put up a post about losing a beloved dog to illness, and welcoming a new one into the family. At the very time I read the post, Mr. BTEG and the Dancer were on their way to pick up a new rabbit to add to our family, which I mentioned to Chris. She said that she wanted to see a picture of our bunnies, so here they are.

The bunny that has been with us since 2018 is named Kip. The Dancer has been thinking for a while that perhaps Kip should have another bunny to play and socialize with. We finally started seriously looking a couple of months ago, and a week ago, less a day, Mr. BTEG and the Dancer drove to a rescue a couple of hours away, and came home with Tallahassee (yes, her siblings were Little Rock and Wichita.) 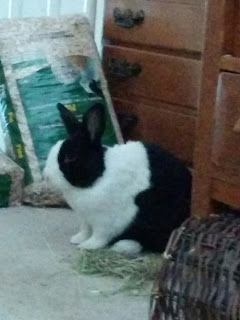 Here is a picture of Tallahassee. Hers is a much larger breed than Kip's. Pretty sure Kip is a Dutch rabbit, and Tallahassee is a brown/black Rex. 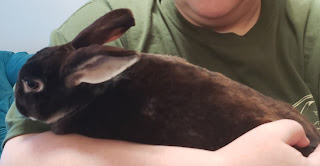 And a picture of Kip and Tallahassee investigating each other. Until they get their dominance issues sorted out and bond, their pen is split in half, and they get separate time to run around in the Dancer's bedroom. 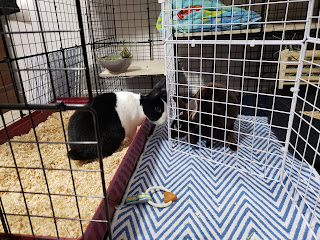 Having a bigger bunny has been extra work for the Dancer. Talia (her nickname) drinks about twice as much, and pees twice as much, as Kip does. But it seems to be good for Kip to have a fellow rabbit resident, and of course Talia now has a good home. :)
Posted by Barb the Evil Genius at 8:32 PM